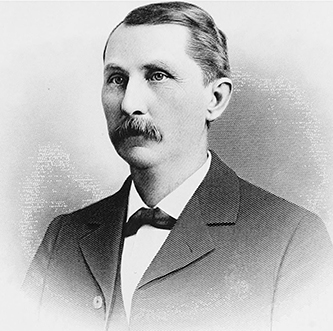 Richard Harrison Speight, physician, planter, and state senator, was born in rural Edgecombe County, the son of John Francis and Emma Lewis Speight. His father was an ordained minister of the Methodist Protestant church and a prosperous farmer. Young Speight attended a neighborhood school until, at age seventeen, he volunteered as a corporal in Company K, Seventy-first North Carolina Regiment, for service in the Civil War. He participated in a number of skirmishes as well as in the Battles of South West Creek near Kinston and Bentonville near Goldsboro. In early 1865 he contracted typhoid fever and was sent home.

In the closing months of the war and for a year afterwards he completed his preparatory education and in the fall of 1866 entered The University of North Carolina, where he pursued a premedical course. Admitted to the University of Maryland School of Medicine, he was graduated in 1870 after two years of study.

Speight established a practice in Edgecombe County, where he also became a successful planter. He served three terms as president of the county medical society and one as vice-president of the State Medical Society. On his farms, which extended across county lines, he produced huge crops of peanuts, tobacco, corn, and cotton as well as grains for livestock and produce for his family and tenants. Concerned about the welfare of farmers, he served as vice-president of the State Farmers' Alliance and as a delegate to several meetings of the National Farmers' Congress. He was the principal founder and president of a large cotton seed oil mill.

In addition, he served several terms in the North Carolina Senate. As a physician as well as a humanitarian, Speight was concerned about the welfare of the insane and served as chairman of a legislative committee on insane asylums. Under the leadership of this committee, the insanity laws of the state were revised and updated. Two governors appointed him to the governing board of the North Carolina Insane Asylum, but he declined a second term when he was in the senate. As a legislator Speight sponsored the bill to place a statue of Civil War governor Zebulon B. Vance on the capitol grounds. Returning home, he continued his medical practice until age sixty-eight and his farming until his death at seventy-three.

Speight married Margaret Powell of Edgecombe County, and they were the parents of a dozen children: Robert P., Henry L., Fannie W., Mary P., Richard H., Jr., Jesse P., George W., Joseph P., Seth E., Frank J., James Ambler, and Elias Carr. After the death of his wife in 1894, Speight married Margaret Whitefield. A member of the Methodist Protestant church, he was buried in the family cemetery on his farm.

Medical Society of the State of North Carolina, Transactions (1920).

Dr. Richard H. Speight Jr. was my grandfather, who died before I was born, however I spent my early years on the farm at Speight's Chapel with my grandmother, Lucille Speight, and knew Dr. Joe, Dr. Ambler, Mary Powell, whom my mother was named for, and Jesse P.
I don't know what I can contribute that is not already published, but will be pleased to answer any questions you may have, that I am qualified to answer.

I found a calling card from

Hi Charles!! I’m reading your comments 5yrs after you posted but I wanted to greet another distant cousin. Dr. Speight was my Great Grandfather. My Grandfather was George Wimberly Speight of whom my Dad and brother are also named for. I am working on our family’s genealogy and have most back to John Francis Speight who came here from England.

Hello, Charles.
Hopefully you will see this question considering it has been almost 2 years since you posted your comment. You had a remarkable ancestry.
I have been trying to find out about the physician that signed my mother's birth certificate in 1935. It was was signed, J.A. Speight. After searching for the name, I concluded it was James Ambler Speight. She was born in Rocky Mount. But, there seems to be a discrepancy within details that I've read. I am thinking that your grandfather was the father of the physician that signed the birth certificate. Did he name a son J.A. Speight, Jr.? There is an obituary on a James Ambler Speight, Sr., but the dates do not add up and he was a pharmacist. I can't believe there were two James Ambler Speight, Sr. in Edgecombe County. I would appreciate any help as I'm trying to piece together her past. She is 80 and never knew much of the info that I've been looking for. I'd also like a photo of the physician J.A. Speight who signed her birth certificate. Would appreciate any advice
thank you.

“Uncle” Ambler was my

“Uncle” Ambler was my grandfathers brother. He also signed my birth certificate. There were three brothers that were doctors in Rocky Mount, my grandfather Dr. Richard H Speight, Dr. James Ambler Speight and Dr. Joe Speight.
Dr. Amblers nurse was Mrs. Hux, her son is a friend of mine, Bob Hux, Columbia, SC.
My grandfather died in 1939, I was born in 1943, but I did go fishing with uncle Ambler at Nobles mill pond, until he passed away in 1958.
He drove one of the old Studebaker automobiles that you couldn’t tell which way it was going, the front and the back looked almost alike.
Hope this helps your record search