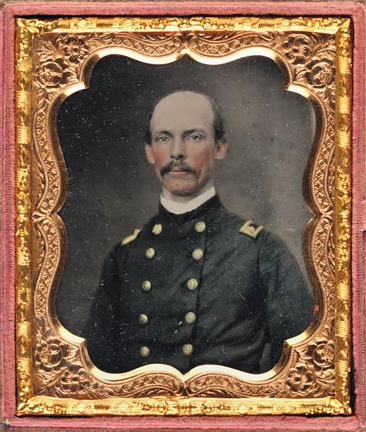 Charles Courtenay Tew, teacher and Confederate officer, was born of French Huguenot descent in Charleston, S.C., the son of Henry Slade and Caroline Jane Courtenay Tew. After attending the common schools of South Carolina, he entered the South Carolina Military Academy (now The Citadel) in 1842 and was graduated in 1846 first in his class. The next year he joined the faculty of the Columbia branch of the academy to teach history, belles lettres, and ethics, a post he held until 1852. Also an accomplished teacher of French and competent in the use of several other languages, he spent the following year in Europe and then returned to The Citadel. In 1854 he was appointed superintendent of the South Carolina Arsenal Academy, Columbia, where he remained until 1859, when he resigned and moved to Hillsborough, N.C.

Anticipating a need in the South for men with military training, Tew signed a contract to establish the Hillsborough Military Academy. There he was joined by J. S. Gillard, also a Citadel graduate, in the operation of this four-year school for boys. Its barracks had a capacity of 125 cadets. Tew was granted the rank of colonel in the North Carolina militia, and each of the teachers was commissioned captain. Fifteen months later, at the beginning of the Civil War, Tew and all of the teachers were called to active duty. Early in 1861 Governor John W. Ellis asked Tew and Daniel H. Hill of the Charlotte Military Academy to draw up a list of military supplies that the state might soon need. With this list in hand, Colonel Charles C. Tew was sent to the North to purchase them. For a short time before North Carolina seceded from the Union, Tew was commander of Fort Macon. His initial rank was major, but he was soon made a colonel and commanded the Second North Carolina Regiment.

Tew saw action at Harpers Ferry and in the Antietam campaign. He was killed at the Battle of Sharpsburg. At the request of Governor Henry T. Clark, Senator William T. Dortch, and others, Tew had recently set in motion the steps to resign from the army and return to train young men at the Hillsborough academy. His death occurred, of course, before final action could be taken in this case.

Several accounts of his death were circulated. General John B. Gordon saw him fall in advance of the Confederate line while the two were on reconnaissance and believed he had died instantly. Another report said that he was mortally wounded and died the next day. For several years after the war a former Union soldier, apparently in an attempt to get money, wrote tantalizing letters to the family saying that Tew was alive. Tew's aged father went to Washington to obtain permission and visited the Dry Tortugas government prison in the Gulf of Mexico off the southwestern coast of Florida in a vain search for his son. Finally in October 1874 a silver cup that Colonel Tew had in his possession at his death was returned to the family by a Union captain. Tew also had had with him a sword that had been presented to him by the arsenal cadets as well as a fine watch, but they were never returned. Neither Tew's wife nor his father, it was reported, "long survived the harrowing anxieties to which mercenary sensationalism had basely subjected them." In 1885 a former Union soldier wrote to one of Tew's daughters relating the details of his death on the battlefield at which time he was still holding his sword. In 1891 a former member of Tew's regiment called at the office of the News and Observer in Raleigh and reported that he and two other men, both of whom were later killed in battle, had buried Tew's body, together with his sword, on the field of Sharpsburg.

In 1854 Courtenay Tew, as he was known by his family, married Elizabeth Faust Tradewell of Columbia, S.C. They had five children: Elizabeth Caroline, Emma Louise, James Tradewell, Charles Matthew, and Ella Glass.

COL Tew’s sword, given to him

COL Tew’s sword, given to him my Cadets at The Arsenal in Columbia, SC, has been recovered and at a ceremony at Antietam presented to The Citadel, where it now is displayed at The Citadel Museum. I recommend you research this and update the biography...it is quite a story. D Costas.