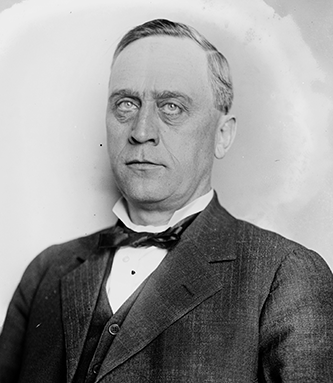 Hallet Sydney Ward, lawyer, state senator, solicitor, and congressman, was born near Gatesville, the son of Nathaniel Owens, a farmer and a soldier for the Confederacy, and Elizabeth Matthew Ward. Young Ward received a limited education so far as public schooling was concerned due to his rural surroundings. In the home setting, his maternal aunt instructed him using the McGuffy Readers Series. For a short time during his teenage years Colonel George V. Cowper taught him, and he received training from Captain Julien Picot at Como in Hertford County. He then studied law at The University of North Carolina, from which he was graduated in 1893. He was admitted to the bar in the same year and set up a practice in Winton, moving on to the town of Plymouth in 1895. Beginning in 1899 he served in the state senate, and in 1902–3 he was mayor of Plymouth. From 1904 to 1910 he was solicitor of the First Judicial District, an appointment made by Governor Charles B. Aycock. In this capacity as prosecutor for the state, he acquired the nickname "Hot Stuff," a play on his initials.

One of his cases, in particular, stands out as being controversial. In State v. Harrison, more popularly called the "Beasley Kidnapping Case," Ward was able to obtain a conviction of Joshua Harrison for abducting Kenneth Beasley, the only son of Samuel M. Beasley, a farmer and state senator. The accused was defended by two governors, Thomas J. Jarvis, his brother-in-law, and Charles B. Aycock, as well as Ike Meekins, later a federal judge. Despite the personalities involved and the circumstantial evidence, the jury brought in a guilty verdict, which was upheld on appeal. The boy, however, was never found.

Ward was elected to the Sixty-seventh and Sixty-eighth Congresses (1921–25) but declined the candidacy for a third term. Relocating in Washington, N.C., he formed a law partnership with Junius D. Grimes, the son of General Bryan Grimes. In 1931 he returned to the state senate with a specific mission: to fight the proposal for a minimum eight-month school term. When Ward was eighty-two, the lawyers of Beaufort County presented him with a gold medal for his service to the community. He wore that medal for the rest of his life.

Ward married Aileen Latham of Plymouth in 1898. Two daughters were born, but they both died in infancy. Mrs. Ward died in 1927 shortly after they moved to Washington, N.C. In 1929 he married Dora Bonner of that town. They had one son, Hallet S., Jr., who became chief judge of the Second Judicial District. An Episcopalian, Hallet Ward, Sr., taught the Men's Bible Class at St. Peter's Episcopal Church in Washington for thirty-four years. He was a member of the Democratic party and of the Patriots of North Carolina. Ward was buried in Oakdale Cemetery, Washington, N.C. His portrait was hung in the district courtroom of the Beaufort County Courthouse.