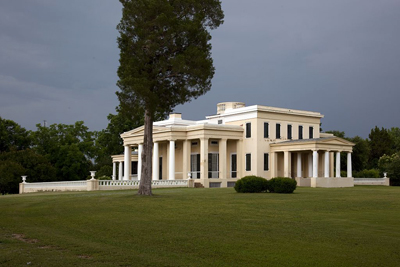 Nathan Bryan Whitfield, legislator, planter, and entrepreneur, was born at Pleasant Plains, Lenoir County, the son of Bryan and Winifred Bryan Whitfield. He attended The University of North Carolina from 1813 to 1816 but left following a dispute with the faculty. Young Whitfield was elected to the House of Commons in 1821 and to the North Carolina Senate in 1822, 1823, 1825, and 1827. He served on the Council of State in 1828 and 1830 and was commissioned a major general in the state militia.

After several trips to Florida and Alabama, Whitfield in 1835 moved his family and slaves to Marengo County, Ala., where he acquired large tracts of land. Eight years later he purchased from George S. Gaines a farm that he named Marlmont near the town of Demopolis. There he located his household and began constructing a sizable residence.

By 1850 Whitfield owned 167 slaves plus real estate valued at $53,000. The new house took on even more substantial proportions as Whitfield, an accomplished amateur artist, architect, and engineer, designed more and more rooms. By about 1860, Gaineswood, as he called the mansion, was a showplace. During the preceding decade Whitfield had assisted in building an Episcopal church and a plank road and had increased his fortune to $142,000 in real estate and $300,000 in personal property (mostly slaves).

The completion of Gaineswood and the period of Whitfield's greatest wealth coincided with the outbreak of the Civil War. Both his fortune and health suffered during the conflict; he died three years after it ended and was buried in Riverside Cemetery, Demopolis. In the following decades Gaineswood was neglected as it passed through several ownerships. Recognizing the structure as architecturally the most important mansion in the state, the Alabama Historical Commission in 1971 undertook its restoration. It is now a National Historic Landmark and open to the public.

Please email me any info on

Please email me any info on Lydia Bryant. She was family. Thank you, J. Yaggi

Nathan Bryan Whitfield attended UNC. His relative John Heritage Bryan served on the Board at UNC for 30 years.
Nathan purchased the property where Pushmataha signed the Treaty of Dancing Rabbit.
This Bryan family is related to General Edmund Bryan who fought with Pushmataha, William McCauley, Houston and Jackson
in Creek Indian war of 1814. Also related to them is Thomas C. Bryant born 1811 Virginia, whose wife, Choctaw Lydia Virginia
Temple(s) had her land taken to create Mississippi Choctaw Nation, her land was adjacent to the family land sold to the oil companies,
now called Bryan Oil Field. Before she married Thomas C. Bryant, she married TOM MCCAULEY, the Outlaw

I’m doing some digging into

I’m doing some digging into my family history and I came across Mr.Whitfield he owned a slave name Arie Whitfield with whom I come to find out is my great-great grandmother. So I would like to know how I can find some documents.

Thank you for commenting to NCpedia.

Please feel free to contact our library with your question and including dates and locations. Depending on time frame, there may be several sources to help you with your research and we would be happy to assist you.

Lydia was my great-great

Lydia was my great-great-grandmother. I was a product of her Temples marriage. How did she get the land in Mississippi and do you have any information on her parents. Thanks so much.