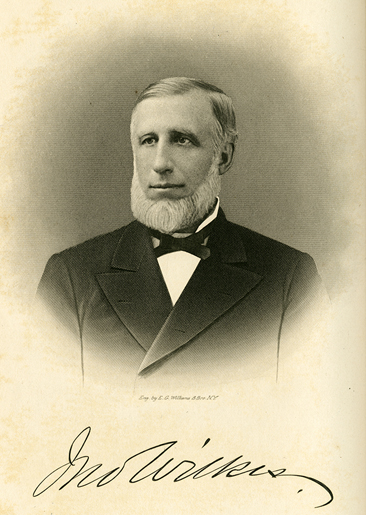 John (Jack) Wilkes, sailor and businessman, was born in New York City of English descent. His great-grandfather was Israel Wilkes, the brother of the eighteenth-century English politician John Wilkes, for whom counties in both North Carolina and Georgia were named. Jack was the son of Charles and Jane Jeffrey Renwick Wilkes. Charles, a naval officer, rose to the rank of rear admiral on the retired list and commanded an Exploring Expedition (1838–42) to the Antarctic continent, the islands of the Pacific Ocean, and the northwestern coast of America. Mrs. Wilkes was the sister of James Renwick, a noted engineer and professor at Columbia University.

Immediately after his appointment as a midshipman on 9 Sept. 1841, young Wilkes was sent to sea. His initial voyage was on the U.S. ship Delaware to the South Atlantic and the Mediterranean. He then served on the U.S. steamer Mississippi in the Gulf Squadron during the Mexican War, including participation in the attacks on Brazos and Vera Cruz. His appointment to the U.S. Naval Academy at Annapolis came in 1846. He was graduated the next year, first in a class of 135. He next saw duty on the Albany as a master in the Gulf of Mexico, but in about 1848 his father had him transferred to work on the charts and calculations of the Exploring Expedition. Later as a lieutenant on the sloop of war Marion, he traveled to China, Manila, and other ports of the Far East. In June 1852 he returned to the United States, and on 3 Nov. 1854 he resigned his commission.

Wilkes settled in Charlotte in December 1853, probably during a leave of absence from the U.S. Navy. His purpose in moving to North Carolina was to supervise certain mining and milling property, including the Capps Gold Mine. In 1858 he turned his business interest to the Mecklenburg Flour Mills, which he purchased with William R. Myers. Wilkes became the proprietor, later called the manager, of a foundry the following year. This business had various titles including the Mecklenburg Foundry and Machine Shops, as well as the Mecklenburg Iron Works.

During the Civil War Wilkes took an active role in the Southern effort through his service in the local vigilance committee, in the Home Guards, and as a financial adviser to North Carolina state officials. From 1861 to 1865 the Confederate government took possession of the Mecklenburg Iron Works, which was used as an ordnance depot to supply the Confederate navy. Wilkes also became a railroad contractor in government service. He and his brother Edmund obtained a contract to build the section of the Piedmont Railroad from Greensboro to Danville. The brothers, who had formed a partnership, Edmund Wilkes and Brother, were involved in the construction in 1862 and 1863. Then they began building a railroad from Raleigh to Lockport but had to stop when General William Tecumseh Sherman occupied the area. In 1865 John Wilkes secured a pardon from the U.S. government. In August 1865 he obtained a charter for the First National Bank of Charlotte and served as its president until 1869. This bank had the distinction of being the first national bank established south of Richmond. Wilkes also formed a business partnership with entrepreneur Miles Wriston and General John A. Young. They moved the Rock Island Woolen Mills to Charlotte, but eventually the enterprise failed. After this Wilkes devoted his energy to the Mecklenburg Iron Works, which became a successful business.

In April 1854 he married Jane Renwick Smedberg, of New York, who became a prominent Charlotte philanthropist. The couple had nine children, five of whom died young. Wilkes was a very active member of the Episcopal church both on the parish level and often as a delegate to the diocesan convention. He was a representative to the General Convention of the church on several occasions. Wilkes died in Charlotte and, after the funeral at St. Peter's Episcopal Church, was buried in Elmwood Cemetery.