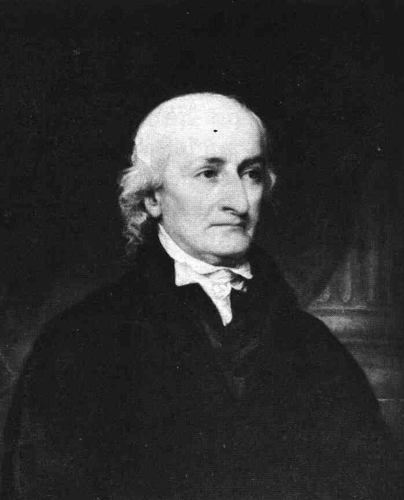 Hugh Williamson, educator, physician, legislator, merchant, scientist, scholar, and signer of the U.S. Constitution for North Carolina, was born near Octorara Creek in West Nottingham Township, Chester County, Pa., close to the Lancaster County boundary. His father, John W. Williamson, a clothier by trade, immigrated to America from Dublin, Ireland, in 1730, settling in Chester County. He married Mary Davison, the daughter of George Davison of County Derry, Ireland; immigrating to the colonies in 1718 at age three, she was captured for a short time by the notorious pirate, Blackbeard, during the crossing. She died in 1805. Her brother, or more likely her half brother, was Brigadier General William Lee Davidson, the North Carolina Revolutionary War leader, according to Williamson.

Hugh was the oldest of ten children—four girls and six boys—growing up under the influence of a typical Scots-Irish home, which taught thrift, industry, resourcefulness, self-reliance, and a deep Presbyterian devotion to the church. His father decided to provide him with a liberal education, and he was first taught by the Reverend Francis Alison at his academy in New London, Chester County. Alison, an "Old Light" or orthodox Presbyterian minister, was later described by Ezra Stiles as the "greatest classical scholar in America." He imparted to young Hugh a deep love for learning and stimulated his naturally inquiring mind. When Alison joined the faculty at the College of Philadelphia, his school was moved to Newark, Del., and taught by his pupil, the Reverend Alexander McDowell, with whom Williamson continued his studies. On completing this course, Williamson entered the College of Philadelphia (later the University of Pennsylvania) in 1753. Coming once again under the influence of his old mentor, Francis Alison, he taught Latin and English in schools associated with the college while he himself pursued the study of mathematics. On 17 May 1757 Williamson received a bachelor's degree in the first graduating class of the college.

Williamson's father died in 1757, just prior to Hugh's graduation, immediately after which he went home to Shippensburg, Cumberland County, to which the family had recently moved, in order to settle his father's estate. During the coming months Williamson continued his interest in theology by studying for the ministry at East Nottingham under the Reverend Samuel Finley, an emerging leader of the "New Lights" faction in the Great Awakening. In 1758 he moved on to Connecticut to pursue further theological training and while there was licensed to preach. On his return he was admitted to the Philadelphia Presbytery. 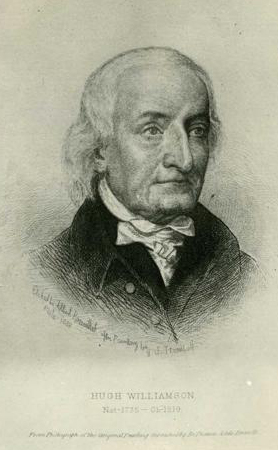 Doubting that he had the physical stamina required for a public speaking career and motivated by his own increasing personal disaffection with the growing theological debate between the orthodox Presbyterians and the New Lights, having been exposed to both through Alison and Finley, Williamson decided to leave the ministry and study medicine. Although licensed to preach, he was never ordained, nor did he ever accept the responsibility for a congregation. He first obtained a master's degree from the College of Philadelphia in 1760 and accepted an appointment to teach there while studying medicine.

In October 1763 Williamson resigned his teaching position in Philadelphia and sailed the following year for Scotland. He studied consecutively in Edinburgh, Scotland, London, England, and Utrecht, the Netherlands, where he received an M.D. degree. After some travel around Europe, he returned to Philadelphia by 1768 and began to practice medicine. Also in 1768 he was elected a member of the American Philosophical Society, perhaps as part of an attempt to infuse the organization with new blood. Being drawn more and more into the scholarly and scientific circles, Williamson was appointed by the society to a committee for the observation of both Mercury's and Venus's transit across the sun. He wrote the society's report that was published in volume one of its Transactions. He joined other scientists and scholars in conducting experiments and is thought to have collaborated with Benjamin Franklin while in England. His "Observations on Climate" (1770) won him recognition among European scientists, and he read a paper on the electric eel before the Royal Society in London. The Holland Society of Science and the Society of Arts and Sciences in Utrecht made him a member, and the University of Leyden awarded him an honorary LL.D. degree.

Always working in support of his alma mater, the Newark Academy, he toured the West Indies in 1772–73 soliciting aid as a trustee of the school. Again, on 22 Dec. 1773, he sailed to Europe on a similar venture. Having spent some time before sailing in Boston becoming acquainted with many colonial leaders, he was present and observed the Boston Tea Party, leaving for England on the Hayley, one of John Hancock's ships, the first vessel to sail from Boston after the Tea Party. Bringing the first news of the event to England and being an eyewitness, Williamson was examined by the Privy Council, to which he remarked that if the British government continued to pursue its present course with regard to the colonies, civil war or revolution could be the only result. He also wrote an open letter to Lord Mansfield, England's lord chief justice, in defense of the colonies. The Plea of the Colonies was published on his return to Philadelphia. In March 1774 Williamson was one of twenty-nine Americans in London who signed a petition to the House of Lords protesting the Port Bill.

On learning of the signing of the Declaration of Independence, Williamson sailed for home on the brig Salley in December 1776 and was captured by a British man-of-war off the Delaware capes. After managing to escape in an open boat, he delivered important dispatches to the Continental Congress from its European envoys. Finding no suitable medical position available in the Continental army, he returned to his practice for a brief time. In the interim he was elected a ruling elder in the First Presbyterian Church of Philadelphia.

In 1777 he entered into a mercantile business venture with his brother John and sailed to Charles Town. Baltimore bound with a ship's cargo, Williamson stopped his journey at Edenton when impeded from continuing to his original destination by the southwards movement of the British under Lord Howe. Finding a situation to his liking, he decided to remain in Edenton and tried to help the war effort by engaging in shipbuilding operations at Winton and working with a tannery in the Edenton area. He continued in the mercantile business and also reentered private medical practice.

During this time he became acquainted with Governor Richard Caswell and offered his services to the state. After Williamson vaccinated North Carolina troops against small pox at New Bern, Caswell, then major general of the militia, appointed him surgeon general for the state. In August 1780 he served at the Battle of Camden, where he went behind enemy lines under a truce flag to care for American prisoners; he was even consulted by the British in the case of one of their general officers. In the fall he served under General Isaac Gregory in the Great Dismal Swamp, conducting experiments implementing dietary controls, instituting the use of proper clothing in keeping with local environmental conditions, and establishing specific sanitary procedures. Out of a force varying between 500 and 1,200 men during the winter, only two men died from disease and no one was granted sick leave. Williamson apparently advanced funds of his own to the state to buy medical supplies that would be needed in the event of a protracted campaign.

With his election to the North Carolina House of Commons from the Borough of Edenton in April 1782, Williamson embarked on both a political career and eleven years of service to his adopted state. He introduced eight bills, including one granting equity jurisdiction to the superior courts. His first three terms in the Continental Congress (1782–85) revealed him to be meticulous, energetic, and tenacious in discharging his duties. He made himself knowledgeable in areas of public finance, state and national debts, western lands, and Indian problems. Williamson remained in close contact with the state through correspondence with the leadership and through his business associates during the years he lived in Philadelphia and New York attending the congress. He was present at Annapolis in December 1783, when Washington resigned his commission as commander-in-chief of the Continental army and was represented in John Trumbull's painting of the event.

On his return to Edenton in 1785, he was immediately elected once again to the House of Commons from Chowan County and was responsible for the enactment of a law providing for the "Security of Literary Property," a precedent for the future copyright laws. He was instrumental in the founding of several academies and served on their boards of trustees.

One of five delegates to the Annapolis convention in 1786, Williamson was the only one actually to go, arriving on the day of adjournment. In March 1787 he was appointed to the Constitutional Convention at Philadelphia. Arriving on 14 June, he remained for the entire convention and signed the Constitution for the state of North Carolina. He served on five committees, offered twenty-three motions, and delivered over seventy speeches. Williamson's main role at the conference was in proposing and supporting certain compromises that ultimately made ratification a reality. He proposed an impeachment procedure for the chief executive, endorsed a six-year term for U.S. senators, recommended that a free and slave population census be taken in support of the Three-Fifths Compromise, and favored the extension of slavery until a future date in order to give all states conditions that they could accept in the Constitution. Never approving of slavery himself and never owning any slaves, he believed it better to have all the states within the Union, rather than excluding some by adopting provisions that everyone knew would not be accepted.

Williamson worked hard in North Carolina for ratification of the Constitution. He attended the Second Constitutional Convention at Fayetteville in 1789 as a delegate from Tyrrell County, making the initial motion on the floor to adopt the document that he had signed for the state. Meanwhile, he was reelected to the Continental Congress and was the last chosen delegate to serve, remaining in attendance until the old congress lapsed into disuse. He spent many long hours working to regulate the state's accounts from the Revolution with the central government; those records regarding the service of North Carolinians in the Revolution that have survived were saved largely through Williamson's efforts. Elected to the First and Second Congresses from North Carolina, he opposed the assumption of state debts, believing this unfair to states such as North Carolina that had already paid part of their own war debts. In the Second Congress he concentrated on obtaining tariff rates in the Revenue Bill that would be favorable to the state.

After the death of his wife, Williamson retired from public life upon concluding his second term in Congress. Establishing a permanent residence in New York City, he devoted himself to study, writing, philanthropy, and private business enterprise. Among his numerous writings, principally scientific in nature, is a two-volume History of North Carolina (1812) that stands as the first post-Revolutionary history of the state. An original trustee of The University of North Carolina, he served as secretary to the board until 1801. As late as 1816 he corresponded with Nathaniel Macon, giving advice on artists and materials for the statue of George Washington that North Carolina was planning to commission.

A quiet, genial man of strong principle, Williamson died in New York City and was buried in the Apthorpe family tomb in Trinity Churchyard.

Office for the Bicentennial, U.S. House of Representatives, History in the House, vol. 3 (January 1987).

A Biography of Hugh Williamson 1735-1819, University of Groningen: http://www.let.rug.nl/usa/biographies/hugh-williamson/