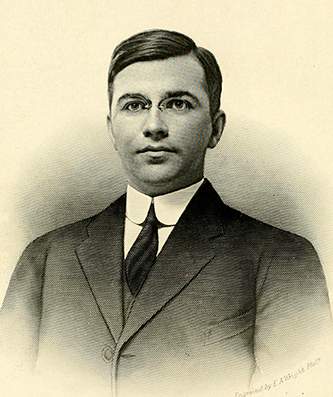 Edward Jenner Wood, physician, was born in Wilmington, the son of Thomas Fanning (1841–92), also a physician, and Mary Kennedy Sprunt Wood (1848–1932), the daughter of cotton exporter Alexander and Jane Dalziel Sprunt Wood. The elder Wood was regarded as the father of the North Carolina State Board of Health because of his role in organizing and managing it; he also cofounded the North Carolina Medical Journal. Edward J. Wood was graduated from The University of North Carolina with a B.S. degree in 1899 and received an M.D. degree from the University of Pennsylvania in 1902. Returning to Wilmington, he passed the North Carolina State Medical Board examinations in 1903 and opened a practice in the town of his birth. In 1906 he went to Munich, Germany, for further medical study, and in 1910 he was elected president of the North Carolina Medical Society.

In 1918, during World War I, Wood was commissioned a lieutenant commander in the U.S. Naval Reserve. At the end of the war he served as an assistant in clinical medicine at Guy's Hospital in London and in 1920 received a diploma in tropical medicine from the Royal College of Physicians and Surgeons in London.

Wood's reputation was based on his expertise in tropical medicine, particularly pellagra and (tropical) sprue. Both diseases involved nutritional deficiencies endemic in the rural South in the 1920s. Wood was the author of many articles in his area of specialization, including "A Treatise on Pellagra" and the chapters on pellagra in The Oxford System of Medicine and sprue in Nelson's Loose Leaf Medicine. He delivered lectures before meetings of his colleagues as well as to the general public on how to identify these diseases and how to eradicate them through improved diet, sanitary practices in food handling and preparation, and changes in agricultural practices.

On 18 Apr. 1906 he married Louise Bellamy, and they had three children: Edward Jenner, Jr., John Dalziel, and Louise Bellamy, who married Donald Brock Koonce. Koonce was elected president of the North Carolina Medical Society in 1957.

Wood died at his home. Funeral services were conducted at the First Presbyterian Church, Wilmington, with burial in Oakdale Cemetery.

New Hanover County Medical Auxiliary, The Lonely Road: A History of the Physicks and Physicians of the Lower Cape Fear, 1735–1976 (1978).