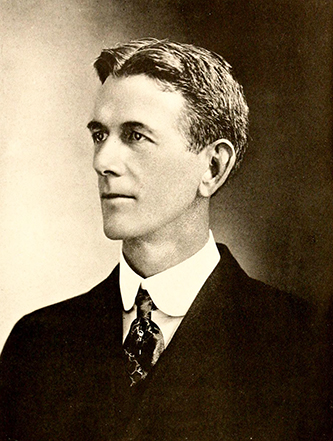 Robert Herring Wright, teacher and educational administrator, was the first president of East Carolina Teachers Training School (later East Carolina University). He was a descendant of John (d. 4 Oct. 1814), a veteran of the American Revolution, and Penelope Clark Wright, and the son of John Cromartie and Bettie Vaiden Herring Wright of Coharie, located between the Big and Little Coharie rivers in Sampson County (now Parkersburg).

Wright belonged to the period of educational awakening in North Carolina that was ushered in by Governor Charles B. Aycock. In the quarter of a century from 1909—when Wright was named president of East Carolina Teachers Training School—until his death, he was involved in every major educational movement in the state.

In 1888, having completed the courses offered in the local neighborhood school, Wright took an examination for a teacher's certificate and began teaching at Hungry Neck in Bladen County. After two years he entered Oak Ridge Institute in preparation for college. He left Oak Ridge in 1892 and taught for the next two years in Marlborough County, S.C., before entering The University of North Carolina as a sophomore in the autumn of 1894. At Chapel Hill he served as president of two societies, became captain of the football and track teams, and was marshal at the commencement of 1896. After receiving a bachelor of arts degree in 1897, Wright taught for a year in Stanhope, Nash County, and from 1898 to 1901 he taught mathematics and coached football at Oak Ridge Institute.

He entered the Johns Hopkins University in Baltimore in 1901 and in June 1902 began teaching history in Baltimore City College. In 1903 he left Johns Hopkins to devote full-time to his duties at City College, where in the next year he became chairman of the Department of History, Civics, and Economics. In 1906 he was appointed principal of Eastern High School, one of two high schools for girls in Baltimore. Wright served as the first president of the Maryland History Teachers Association and was an active member of the North Carolina Society of Baltimore.

In 1909 he accepted the presidency of the newly established school for training teachers in Greenville. Wright was convinced that the most vital factor in improving the public schools of North Carolina was better teacher training, and he stressed the need for instructing future teachers in the most efficient way to integrate theory and principle in their classroom procedures. The new school was originally set up to offer a two-year professional course, but in 1920, through Wright's guidance, it was authorized to provide four years of professional work and was rechartered as a teachers' college. Under his leadership, the school grew from an institution of about 175 students to a college of 1,000. The number of graduates during the twenty-five years of his administration, including those with the A.B. degree and those holding diplomas, was 4,431; a total of 22,327 students had attended the school. The faculty had grown from 13 to 90, and the nine subjects taught in the first year had grown into twelve departments.

As a result of his special concern with the apprenticeship of student teachers and the importance of supervising teachers and critic teachers, a grammar school in the Greenville school system was located on the Training School campus in 1914. East Carolina Teachers College was received into full membership in the American Association of Teachers Colleges in 1926, and in the following year it was ranked as a Class A college by the Southern Association of Colleges and Secondary Schools. In 1929 the college was granted the right to offer graduate courses and to confer the master of arts degree.

Wright served as director of the college's summer school program for five years, and he guided the evolution in concept of summer school, which had developed from the earlier teachers' institutes. East Carolina Teachers College became one of the first colleges in North Carolina to offer only regular-term classes in summer school.

Wright collaborated in the preparation of a bulletin, Training Courses for Rural Teachers, issued by the U.S. Bureau of Education in 1913. He was the chairman of an educational commission appointed in 1917 to study the public schools of the state and make recommendations for their improvement. In 1920 he presented a series of ten lectures at Peabody College for Teachers. He fought vigorously in 1928 to persuade the General Assembly to pass a measure providing an eight-month public school term.

Among his professional honors were the doctor of education degree conferred by Wake Forest College in 1928 and the presidency of the American Association of Teachers Colleges. In Greenville he was an active member of the Jarvis Memorial Methodist Church and the Masonic order; he was a charter member of the Greenville Rotary Club and the Greenville Country Club. He also served as a director of the Home Building and Loan Association and as president of the East Carolina Shippers Bureau.

At the time of his death, the Robert H. Wright Memorial Loan Fund was established at East Carolina Teachers College by colleagues, students, alumni, and friends. Wright Building on the campus of East Carolina University was named for him. He was buried in Greenwood Cemetery, Greenville.