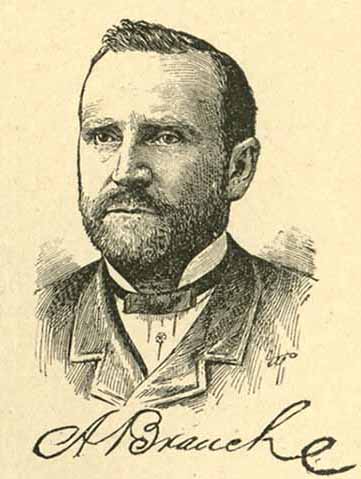 Alpheus Branch, a Halifax County merchant, banker, and manufacturer, is best known for his role in creating North Carolina’s Branch Banking and Trust Company, or BB&T. He also played a significant role in the recovery of North Carolina’s economic stability after the Civil War when he and Thomas Jefferson Hadley opened the Branch and Hadley bank in 1872 in Wilson County, North Carolina. Banks like Branch and Hadley were essential to the farmers and the local community because they could provide farmers the means to borrow money to buy seed and fertilizer.

Branch was born in Halifax County, North Carolina on May 7, 1843.  Branch’s father, Samuel Warren Branch, had inherited a plantation from Alpheus’s grandfather, John Branch Sr. (father of John Branch Jr., the governor of North Carolina from 1817-1820). On the plantation, Samuel built a house known as Branch’s Grove, where Alpheus Branch’s adolescent days took place after moving there in the late 1840’s. His father sent him to the military academy of Dr. Chas. F. Deems in Wilson, and then later he attended Trinity College.

Branch left Trinity College at age seventeen to fight in the Civil War, where he fought in a Confederate military regiment known as the Scotland Neck Cavalry. After the war, Branch married Nannie Barns, daughter of General Joshua Barnes, and moved to Wilson, NC where he and his wife raised six children. There he invested in a multitude of business enterprises, which included Wilson Cotton Mills and the Wilmington and Weldon Railroad. He also was a senior and principal partner of the mercantile firm Branch, Upchurch & Company.

Branch and Thomas Jefferson Hadley formed the Branch and Hadley bank in 1872. In 1887, Branch purchased Hadley’s shares for $81,000, which at that time was considered one of the largest checks written in Wilson County, and he changed the firm’s name to Branch and Company, Bankers.

Branch was interested in the economic status of his community as much as his own and was involved in a number of community affairs that produced a positive influence over the public. Branch took part in educational developments within his community as well in roles such as trustee of the Wilson Male Academy in 1890 and treasurer of the Wilson Graded Schools in 1891.

Branch, Branch’s father-in-law General Hadley Barnes, J. F. Bruton, R.L. Thompson, and Walter Brodie procured a charter from the North Carolina Legislature in 1889 for a bank called the Wilson Banking and Trust Company. The charter included authorization for the bank to organize a trust department. In 1900 this bank, by then operating as Branch Banking and Company, purchased Branch’s first bank, Branch and Company, Bankers, as a merger acquisition. In 1907 the merged company used its charter to become the first bank in the state to engage in trust activities, and in 1913 the charter was amended and the name of the bank changed to the well-known Branch Banking & Trust Company.

Despite Branch’s father owning up to 39 slaves on the Branch Grove plantation, Alpheus was said to be charitable towards all people of Wilson, regardless of race, sex, or age. When Branch died at the age of 50 on January 3, 1893, the town of Wilson, both black and white, followed him to his burial site to pay their respects. The tomb is located next to St. Timothy’s Episcopal Church where Branch was a devout member and participated as the role of a vestryman.

Branch chose to conduct business in a liberal manner, and the town of Wilson accredits him for the prosperity and growth of the lesser industries that likely would have failed in such trying times without the help of Alpheus’s businesses. According to The National Cyclopaedia of American Biography, a respected member of the Wilson Bar Association had the following to say about Alpheus Branch; “Had it pleased an all-wise Providence to bless him with health and prolong his life, we may not calculate the worth of such a man to the community in which he lived. Few men are more fortunate in their lives, and fewer still leave so long an impress upon the scenes which witnessed their early struggles and triumphs. He was a man of indomitable will, and of restless, untiring energy, and in his death the community, whose interests he did so much to advance, sustains a loss which can not be repaired.”

Why does NCpedia always say

Thank you so very much for your question! I believe a big part of that is because records are filed by county, rather than town. I do agree though that when the town is known, it would be nice to know exactly where in a county a person was born, or resided, or died.

Branch was born in Enfield,

Branch was born in Enfield, North Carolina. Please make this distinction. Too many historical accounts say Halifax County, instead of Enfield, NC.