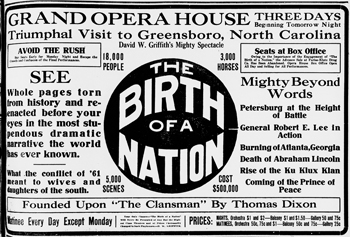 The Clansman, a novel recounting the Civil War, Reconstruction, and the so-called redemption of the South by the Ku Klux Klan, was written by North Carolina author Thomas Dixon Jr. (1864-1946) and published by Doubleday, Page and Company in 1905. The book, a sequel to Dixon's The Leopard's Spots (1903), was set in Washington, D.C., and the fictional town of Piedmont, S.C. Both volumes expressed the author's outrage at a dramatic presentation of Harriet Beecher Stowe's Uncle Tom's Cabin.

With sales exceeding 1 million copies, Dixon adapted The Clansman for the stage. The play of the same title opened on 27 Sept. 1905 and was an immediate hit; it toured the South, the Midwest, and ultimately the East. Governor Robert B. Glenn of North Carolina declared that the production would "correct the foul misrepresentation done this beloved section." Although panned by numerous critics and even condemned by the governor of Alabama for stirring racial animosity, the play was a sellout everywhere it appeared.

The novel was then turned into D. W. Griffith's silent film classic The Birth of a Nation (1915), starring Lillian Gish. Word of its controversial themes spread rapidly, and it appeared that censors might kill the release. The movie was denounced by Oswald Garrison Villard, editor of the New York Evening Post, and Moorfield Storey, president of the American Bar Association. At Dixon's initiative, his good friend President Woodrow Wilson and the cabinet attended a private showing at the White House on 18 Feb. 1915. Wilson is reported to have said the film was "like writing history with lightning." Thereafter Dixon arranged a showing for members of the U.S. Supreme Court and Congress. This squelched a censorship effort in New York City, where the film opened with police protection in March. Despite a riot of 10,000 people in Boston and other protests, as well as the high price of admission ($2.00, versus 15 cents for a typical movie), ticket sales were brisk. Between 1915 and 1927 box office receipts topped $60 million, not including foreign showings.

The Birth of a Nation, the first full-length historical drama translated to film, changed the nature of moviemaking. Use of the production's technical devices of montage, close-up, fade-out, flashback, iris dissolve, soft-focus close-up, and climactic action became standard practice in the genre. Despite its racist overtones, the film has long been recognized as one of the most important technical achievements, as well as profitable works, in American cinema.

Raymond A. Cook, Fire from the Flint: The Amazing Careers of Thomas Dixon (1968).