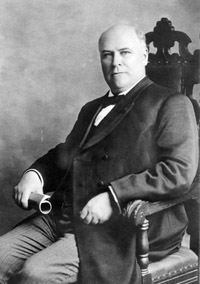 While a champion of educational progress and railroad regulation, Governor Robert Brodnax Glenn (1854-1920) most effectively used the powers of his office to advance the cause of prohibition, approved by voters in 1908. The “Prohibition Governor” was born near Sauratown in Rockingham County on August 11, 1854, to tobacco farmer and attorney Chalmers Glenn and his wife, the former Annie Dodge. The elder Glenn, a captain in the Thirteenth North Carolina Regiment, was killed in fighting at South Mountain, Maryland, in 1862. In 1871 young Glenn enrolled at Davidson College from which he graduated in 1874. For one year he enrolled in a pre-law course at the University of Virginia, but in time followed his father’s lead with study in Richmond Pearson’s law school in neighboring Yadkin County. Glenn, admitted to the bar in 1877, practiced law initially in Rockingham County but soon moved to Stokes County. In 1878 Glenn married Nina Deaderick of Knoxville, Tennessee; they had two children.

From Stokes County Robert B. Glenn was elected to a single term in the state house in 1880. His political fortunes rose with his selection as a presidential elector for Grover Cleveland in 1884 and 1892. In 1885 Glenn moved his law practice to the larger town of Winston. From 1890 to 1893 he served in the Forsyth Rifles of the State Guard. From 1893 to 1897 Glenn was U.S. attorney for the western district of North Carolina, coinciding with Charles B. Aycock’s service in the eastern district. Like Aycock, Glenn, who served a single term in the state senate in 1899-1900, spoke widely on behalf of white supremacy and supported the successful efforts in the legislature to disfranchise black voters.

In 1904 Glenn, campaigning as an “anti-organization” candidate, won the Democratic gubernatorial nomination over Charles M. Stedman, Wilfred Turner, and Theodore Davidson. In the fall he defeated Republican C. J. Harris by a wide margin. As governor Glenn continued his predecessor’s emphasis on public education by endorsing a minimum school term and compulsory attendance. Unlike Aycock, Glenn opposed the use of taxes paid by whites to educate blacks. He sought increased funding for hospitals, public health, and care of the insane. Governor Glenn defended the state’s right to regulate railway passenger rates. He made the arrangements to repay the state’s Reconstruction bonds as ordered by the United States Supreme Court.

Glenn’s skills as an orator were tested by the campaign in 1908 to prohibit the sale or manufacture of liquor. During his legislative term Glenn had been among the leaders of the “drys.” As governor he ridiculed the argument by opponents that whiskey helped business and he worked to identify prohibition in the popular mind with education. In January 1908 the governor was the keynote speaker to the temperance convention in Raleigh. The legislature, at his urging, placed the issue before the voters and, on June 19, 1908, calling it the “proudest day of my life” and the “crowning act of my administration,” Glenn signed the proclamation making North Carolina a prohibition state as of January 1, 1909.

After his term in office Glenn returned to the practice of law in Winston-Salem, representing clients such as Western Union and Southern Railway. He was a popular public speaker for the Presbyterian Church and the Lyceum Bureau and carried the fight for prohibition to other states. In 1915 President Woodrow Wilson, whom Glenn had known at Davidson College, appointed him to the International Boundary Commission, charged with negotiating matters between the United States and Canada. On a trip to Winnipeg, Glenn died on May 16, 1920. He is buried in Salem Cemetery in Winston-Salem.