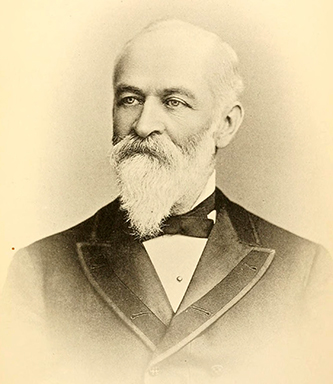 Charles Manly Stedman, Confederate officer, lawyer, and congressman, was born in Pittsboro, the son of Nathan A. and Euphania W. Stedman. His father, a merchant, served in the state legislature and as state comptroller. Young Stedman attended the Pittsboro Academy—then taught by the Reverend Daniel McGilvery, later a missionary to Siam—and the Donaldson Academy in Fayetteville, where his family moved in 1853. Entering The University of North Carolina in 1857, he made an exceptional record as a scholar during four years of study. He was awarded first distinction in every course he took and was graduated with highest honors in 1861, shortly after the Civil War began.

Stedman enrolled in the Fayetteville Independent Light Infantry as a private and served with that company in the First North Carolina Regiment at Big Bethel (10 June 1861). When the Forty-fourth North Carolina Regiment was organized, he was elected lieutenant of Company E, composed of Chatham County men. In time promoted to regimental major, Stedman, a gallant and skilled soldier, fought with the Army of Northern Virginia in every major campaign, sustaining wounds in the Wilderness campaign, at Spotsylvania Court House, and on the Squirrel Level Road near Petersburg. Nevertheless, he was one of twelve North Carolinians who had fought at Bethel and surrendered at Appomattox.

After the war Stedman returned to Chatham County, where he taught school while reading law with Robert Strange and John Manning. In 1866 he married Catherine de Rosset Wright of Wilmington, a daughter of Joshua G. Wright. Shortly afterwards, having been admitted to the bar, he established a legal practice in Wilmington. He was immediately successful and enjoyed a large clientele. A staunch Democrat, he was a delegate to the Democratic National Convention in 1880. Four years later he was elected lieutenant governor of North Carolina. Stedman presided over the state senate with dignity and fairness. In 1888 and again in 1904 he was a strong contender for the Democratic gubernatorial nomination. Both times he was defeated but, without rancor, worked for the election of his former opponent.

From 1891 to 1898 Stedman practiced in Asheville; in 1898 he moved to Greensboro. His concern for public institutions was manifest in various ways. He was director of the Guilford Battle Ground Company (1898–1917), a trustee of The University of North Carolina (1899–1915), president of the North Carolina Bar Association (1900–1901), and director and president of the North Carolina Railroad Company (1909–10). In 1910 he was elected to the U.S. House of Representatives as a member of the Sixty-second Congress. He was reelected nine times and served until his death. Though attentive to his duties, he played an insubstantial role in the legislative process. On his death at age ninety, Representative Stedman was the last surviving Confederate veteran in Congress.

Of a tall, courtly presence, Stedman was the epitome of the southern gentleman and was widely popular among his colleagues. He was characterized as belonging to the "so-called Southern aristocracy" and as "a Chesterfield in manners."

Stedman was survived by a daughter, Mrs. Katherine Stedman Palmer. He was interred in Cross Creek Cemetery, Fayetteville.