There have been three Ku Klux Klan KKK movements in North Carolina and the nation, similar in character but distinct organizationally and chronologically. The first Klan flourished in the Reconstruction era, its name derived from the Greek word kuklos for circle or band; it was almost exclusively southern in its membership and mission to perpetuate white supremacy. Beginning as a social fraternity in Pulaski, Tenn., in 1866, the KKK was soon taken over by former Confederate officers, including Gen. Nathan Bedford Forrest, and transformed into a paramilitary force to oppose Republican policies, especially black suffrage, in Tennessee. In 1868 the order quickly spread across the South as other Republican state governments were established under the Congressional Reconstruction acts. 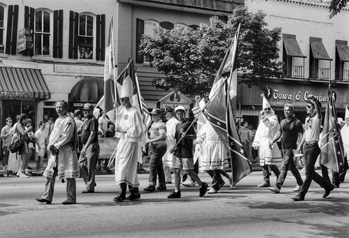 The most Klan-ridden areas of North Carolina were Alamance and Caswell Counties in the northern Piedmont in 1869-70 and Rutherford and Cleveland Counties in the southern foothills a year later. Neighboring counties, such as Sampson, Lenoir, and Jones in the southeast, were also affected. In these places, disguised night riders roamed the countryside, dragging people from their homes; lynching, whipping, shooting, or otherwise assaulting them; driving them away, or destroying their property. Most of the victims were black, but white Republicans were also attacked, especially in Rutherford County.

Around the turn of the twentieth century, the KKK, and the Confederate Lost Cause generally, took on for southerners a retrospective romantic appeal that had been lacking amid the suffering immediately after the war. This attraction was greatly stimulated by North Carolinian Thomas Dixon's novel, The Clansman (1905), and D. W. Griffith's film based on the novel, The Birth of a Nation (1915). The second incarnation of the KKK was born in that environment in Atlanta, Ga., in 1915, encouraging superpatriotism during World War I. After the war, its membership and geographic range expanded dramatically.

During its heyday in the early 1920s, the second KKK numbered about 3 million members nationwide. It gained political power in Indiana, Oklahoma, Oregon, and other states but was comparatively weak in North Carolina. Unlike the first Klan, it was primarily urban, reflecting demographic changes in the country. Its members, drawn chiefly from the lower middle class, were often religious fundamentalists who felt threatened by the drift away from the small-town Protestant culture they had known growing up. They disdained immigrants, especially communists and other radicals, labor unions, Jews, Catholics, and the increasing number of blacks moving into both northern and southern cities. Some Klansmen resorted to the terrorism of earlier days, but the vast majority were nonviolent.

The modern-day KKK emerged in 1946, two years after the second Klan had disbanded as a result of its legal, financial, and political crises. Although this new KKK was fueled by the fear of communism abroad and at home, practically all of its violent activities were directed at undermining efforts to secure the civil rights of African Americans in the South. In North Carolina, one of its banner states, the modern Klan thrived among mill workers and other blue-collar laborers in the Piedmont. One of its greatest embarrassments occurred in 1958, when a prospective KKK rally near Maxton (Robeson County) was broken up by a group of Lumbee Indians. Nationally, the peak in membership came during the civil rights demonstrations of the 1960s, when it may have reached 55,000 (9,800 members in North Carolina). By 1995 the Klan was at its lowest ebb in many years, nationally and locally.

The modern Klan has been chronically fragmented and prone to internal conflicts over policy and leadership. Groups have differed in their readiness to embrace violence. In 1979 Klansmen attacked a Communist Workers Party "Death to the Klan" march in Greensboro, killing five people. They have sometimes forged alliances with like-minded organizations, as when North Carolina Klansmen (also in 1979) briefly formed a United Racist Front with the state's tiny Nazi Party.

For all of its ability to make headlines, the KKK historically has failed to accomplish its major objectives. It did not end southern Reconstruction in the 1870s; that was more nearly the work of organized rioters and Red Shirt campaigners. It did not significantly deflect the nation's progress toward a pluralistic, democratic society in the 1920s. And its major effect on the civil rights movement was to hasten the triumph of that cause when Klan bloodshed mobilized public support for passage of landmark civil rights legislation in the 1960s.

W. Fitzhugh Brundage, ed., Under Sentence of Death: Lynching in the South (1997).