On 9 July 1861, six weeks after North Carolina seceded from the Union, the Confederate government asked Governor Henry T. Clark if the state could provide a place to hold prisoners of war (POWs). The 20-year-old Maxwell Chambers textile mill in Salisbury, then vacant, was hurriedly fitted for that purpose. On 9 December 120 prisoners transferred from the Raleigh State Fairgrounds were the first prisoners to enter the Salisbury Prison, the first and only Civil War prison in North Carolina. 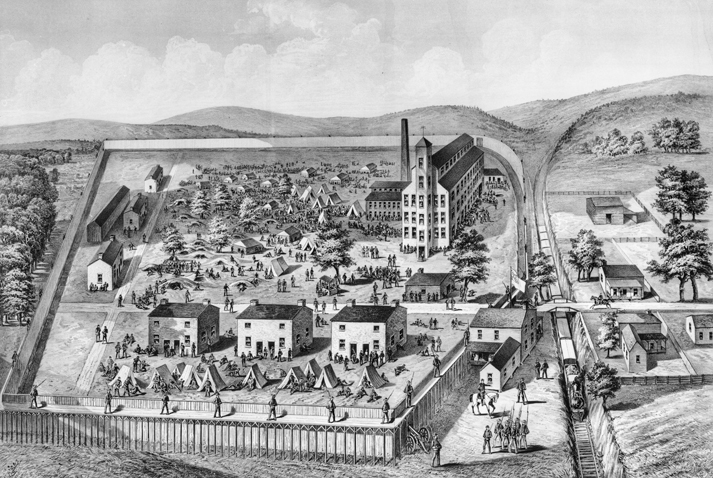 The prison population increased to about 1,400 by late May 1862, when the inmates were paroled and returned to the Union. These POWs lived in relative comfort, passing the time by making trinkets, playing baseball, and even engaging in theatrical productions. After their departure, POWs at Salisbury Prison were outnumbered by Yankee deserters and dissident Confederates. This period of "normalcy" suddenly ended in early October 1864, when 10,000 prisoners began arriving at a facility that was intended to hold only 2,500. This huge increase, which resulted from the fall of Atlanta and the ongoing siege of Richmond, made it easier for the Union army to rescue its POWs. Salisbury received some of the Richmond prisoners, and after October 1864, the majority of newly captured Union POWs.

The most painful period for the Salisbury prisoners was from October 1864 until their release in February 1865. Accounts from POW diaries indicate that the prisoners took in about 1,600 calories per day, whereas 2,000 calories was considered the minimum for survival under the adverse conditions that existed at Salisbury. It is not surprising that diarrhea was the most common disease as well as the most deadly, due in large part to the overcrowding and unsanitary conditions.

From December 1861, when it opened, through September 1864, Salisbury Prison experienced a 2 percent death rate (about 100 deaths). But between October 1864 and 15 February 1865, the rate soared to 28 percent. An estimated 4,000 prisoners died at the prison during its existence, for an overall death rate of 26 percent. Bodies were collected daily at the "dead house" and hauled in a one-horse wagon to trenches in a nearby "old cornfield." A visitor to the cemetery today finds these 18 trenches to be the most somber, painful, and shocking part of the Salisbury National Cemetery. The total death rate in Union and Confederate prisons is considered to have been about the same at 12 percent.

In the fall of 1864 escape from Salisbury Prison was considered almost necessary to save one's life. Many POWs escaped, but only about 300 reached Union lines. During an attempted mass escape on 25 Nov. 1864, none got away and about 200 prisoners lost their lives. Tunneling became popular with the POWs. The most famous tunnel escape took place in mid-January 1865, when an estimated 100 managed to flee the prison. According to one prisoner, the easiest way to get "out of this cursed place" was to defect to the Confederacy. Although about 2,100 POWs reportedly defected, these soldiers contributed little to the Confederate cause.

The morale of the prisoners was usually very low. Muggers plagued all Civil War prisons. Prisoners' diaries often mention their faith in God, and Christian services were held at the prison in the fall of 1864. Occasionally, Salisbury residents would hear the sound of a familiar hymn coming from the prison; as one citizen recalled, it was like "a thought of heaven from a field of graves." Fraternal organizations such as the Masons and Oddfellows provided some moral support for the prisoners.

All POWs were transferred from Salisbury in February 1865, about six weeks before Maj. Gen. George H. Stoneman, on 12-13 Apr. 1865, destroyed the prison and other Confederate installations collectively known as the Salisbury Arsenal. In May Federal troops occupied the town, but in early September 1865 the Union commander turned over civil control of Salisbury to duly elected town officials. At the end of the war all Confederate property fell into Union hands and in September 1866 was sold at auction by the Freedmen's Bureau to the Holmes brothers for $1,600.

In 1866 a U.S. military commission charged Maj. John H. Gee, commandant of the Salisbury Prison during late 1864, with murder and "violation of the laws and customs of war." After a lengthy trial, Gee was acquitted of both charges.

My GGG grandfather David Coon, died as a prisoner of war on October 2, 1864. That is all the information our family has. If thee is additional information that you may have or additional resources we should check please let me know.
Thank you
David G. Cohen

Thank you for visiting NCpedia. Your reference request has been forwarded to the Government & Hertiage Library.

Looking for records of a

Looking for records of a Jefferson S. Snyder who was listed as dying in a Rebel prison camp Feb 8 1864. Anything you can tell me would be appreciated. Thanks

Thank you for contacting us and leaving a comment. I am going to forward you question to our reference staff. Someone should reach out to you. You can also contact them directly at slnc.reference@ncdcr.gov or through this site: https://statelibrary.ncdcr.gov/contact

My great-great grandfather was in Salisbury prison. His name was Sgt. Thomas O'Connor. He was in the 191st PA (formerly the 2nd PA Reserves). His service records (from NARA) list him as escaped. The listed date is Mar 10, 1865 at Fayetteville. I believe he must have entered Sherman's lines at this place and date. Wondering if there is any info on his actual escape. Based on when they vacated the prison and started marching the prisoners for exchange; it is possible he escaped from the march or the train. The exchanged prisoners actually beat him back to the union lines.

My great, great grandfather wrote about his experiences at Salisbury Prison. It's a heartbreaking narrative that was published in the late 1800's in New Hampshire. You might be interested in the narrative, as it mentions by name many of the men who were also imprisoned there. I would be happy to share his story, if you don't already have it. His name was William A. McGarrett.

My second great uncle was a

My second great uncle was a POW there. I would love to see the story info you have. Can you forward to me?
Best regards
Edward Hevne

My ancestor Marrion (Marion) Harpending died there at the age of 19 on January 28, 1865. I would be most interested in the narrative as well. Many thanks.