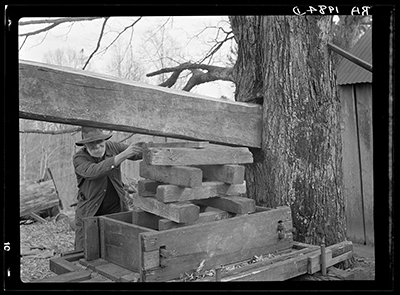 The land for the park was originally farm land. By the 1930s, single crop farming, largely cotton, had exhausted the soil and along with logging had led to erosion, rendering the land unsuitable for agriculture. In the mid-1930s, the land was purchased by the federal government under the Depression-era Federal Resettlement Administration program and rehabilitation of the land and development of a park begun. The project was administered by the National Park Service and employed workers under the Civilian Conservation Corps program.

Crabtree Creek became one of many Recreational Demonstration Area parks created by the National Park Service from the 1930s to the 1940s to transform depleted or blighted land into urban parks and to put people to work under Works Progress Administration (WPA) efforts. At Crabtree Creek, on more than 5,000 acres of park land, Civilian Conservation Corps workers built damns to create lakes, constructed cabins, picnic areas and other recreational facilities, and worked to rehabilitate the poor, eroding soils. Structures were built in the rustic style typical of National Park Service and WPA park projects of the era. The Crabtree Creek Recreational Demonstration area structures are now listed on the National Register of Historic Places. 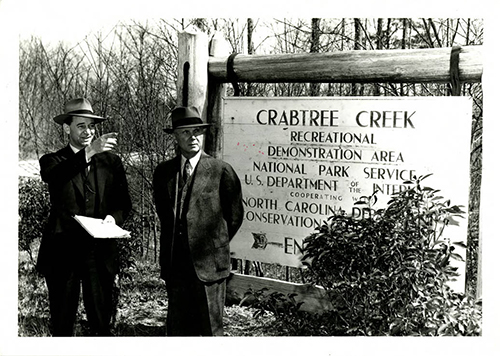 In 1943, the federal government transferred the land to the State of North Carolina for $1, creating a state park. During segregation, Crabtree Creek was essentially but unofficially segregated, with two separate entrances, one for whites and one for blacks.

In 1950, the southern 1,234 acres were split off and renamed, to create Reedy Creek State Park, the state's second officially racially segregated park. Crabtree Creek became the park for whites. Park offerings included scout camps for girls and boys. In 1949, the state legislature appropriated $316,549 for improvements at the park.