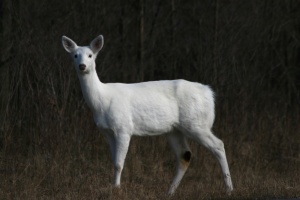 The literature and lore of North Carolina are filled with stories of haunted islands, houses, churches, mines, trains, bridges, swamps, and mountains. The very shore itself seems from earliest settlement to have been awash with spirits. The ghost deer of Roanoke is a story that mixes early settlement and Native American lore. In this tale, the infant Virginia Dare does not disappear with the famous Lost Colony, but grows to womanhood among the Indians and is then transformed by an old witch doctor, jealous of the warrior Okisko, who loves her, into a white doe. When Okisko hunts the white doe and shoots her with a charmed arrow to her heart, the doe turns back into Virginia Dare for a moment but then dies. Ever since, a white doe is said to roam Roanoke as a ghost.

Since the Outer Banks are well known as the "Graveyard of the Atlantic," it is only fitting that a notorious, long-dead pirate haunts the coastal region. Teach's Light, a ghost light in the Pamlico Sound area, was said by novelist Nell Wise Wechter to be the spirit of the pirate Edward Teach, more famously known as Blackbeard. Blackbeard died at the naval Battle of Ocracoke (1718) from multiple gunshot and stab wounds, after which he was beheaded, his head put upon a bowsprit, and his skull ultimately turned into a drinking mug. A ship believed to be Blackbeard's Queen Anne's Revenge was discovered near Beaufort Inlet in 1996, and the clamor between coastal towns over the sunken wreck's artifacts illustrated the haunting hold the old brigand still has upon North Carolina imaginations and dreams.

Diamond Shoals off Cape Hatteras provide the setting for the legend of the "Ghost Ship of Diamond Shoals." The five-masted schooner Carroll A. Deering fetched up one winter night in 1921 with all sails set, food on the galley table, no crew aboard, and none ever found. Mountain ghost stories include the Cherokee tale of a mysterious sheet-like ghost on a nighttime trail in Edna Chekelelee's "Santeetlah Ghost Story." A case could even be made that the state's highest mountain, Mount Mitchell, is also haunted, since the discoverer and champion of its primacy, University of North Carolina professor Elisha Mitchell, fell from a precipice to his death in those hills and is buried atop the great peak.

Other famous and long-lived North Carolina ghostly legends include the Maco Light, the Brown Mountain Lights, the Devil's Horse's Hoof Prints, and the Devil's Tramping Ground. North Carolinians take spirit matters seriously enough that ghosts have entered their colorful comparative vernacular. People particularly unpleasant or hideous by nature are capable of making "a ha'nt hug a thornbush," and others are frightening enough to "to haunt a nine-room house." The only thing worse is the person or ghostly being that can "haunt a nine-room house from across the street." Also in the North Carolina voice, albeit on a more literary plane, is the spectral apostrophe in the prefatory lyric of Thomas Wolfe's Look Homeward, Angel, a ringing line that forever beseeches a haunting: "O lost, and by the wind grieved, ghost, come back again."