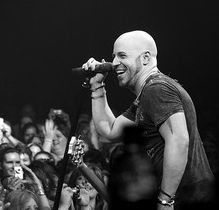 Rock singer Chris Daughtry, born December 26, 1979, grew up in Lasker, a small town in north-eastern North Carolina. His parents are Sandra and Pete Daughtry.  In North Carolina, Daughtry began exploring his musical interest in alt-rock as a member of two rock bands, Cadence and Absent Element.  Prior to auditioning for American Idol, he was a service advisor at a car dealership in Goldsboro, NC.

Chris Daughtry first gained public notice in 2006 when he placed fourth on the fifth season of American Idol. After leaving Idol, he formed the band Daughtry. The band’s debut album, self-titled Daughtry (2006), went quintuple-platinum. Daughtry was nominated for Best Rock Song at the 2008 Grammy awards for Best Pop Performance By A Duo or Group With Vocals for “It’s Not Over” and “Home”, and for Best Rock Album for Daughtry. This album broke music history as the fastest selling rock album of all time.

In 2009, Daughtry released its sophomore album, Leave This Town,which was followed by Break The Spell  in 2011. Leave This Town focuses largely on Daughtry’s childhood growing up with his older brother, Kenneth, in small town North Carolina. In 2010, Chris was nominated for the Choice American Idol Alum award at the Teen Choice Awards.  Chris was the first Idol contestant to have two consecutive number one albums with Daughtry and Leave This Town.

Daughtry is an active participant in the ONE campaign, which aids in the global fight against AIDs and poverty. He married Deanna Robertson on November 11, 2000, and they have four children. He continues to pursue his career in rock music.