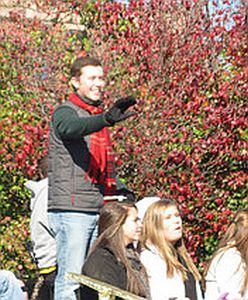 On October 9, 1993, country crooner Scotty McCreery was born in Garner, North Carolina, where he spent his entire childhood. Scotty began playing guitar at the age of 10, and was an active singer in the community through local events and performances. McCreery was a member of his school chior, the Die Meistersingers, at Garnet Magnet High School. He graduated from Garner Maget High School in 2012, and attends North Carolina State University.

The television series American Idol first put McCreery on the map in 2011. A country artist with a recognizably deep voice, McCreery took first place in season ten of American Idol. Since his win, Scotty has released his debut country album, Clear As Day (2011), which is heavily influenced by McCreery’s childhood growing up in his home town of Garner. The album's lyrics are dotted with references to sweet tea and Friday night football games.

He toured with the other top ten American Idol contestants in 2011, and continues to pursue a career in country music.