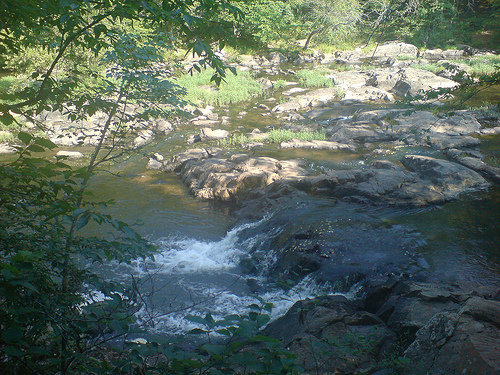 The Eno Indians were likely one of the loosely related tribes of Siouan-speaking Native Americans living in the Piedmont of what is now North Carolina at the time of European exploration. Little is known about them, and their existence is recorded primarily in seventeenth- and early eighteenth-century Virginia and North Carolina documents. Although their villages of Eno Town and Adshusheer in what is now Durham County have not been located, some information about related Siouan-speaking peoples in the region has been found through the long-term Siouan Project of the Research Laboratories of Archaeology at the University of North Carolina at Chapel Hill.

Governor George Yeardley of Virginia first mentioned the Eno Indians (whom he called Haynokes) in connection with their resistance to Spanish explorers. In 1670 John Lederer, a German explorer, gave a somewhat detailed description of the tribe he called the Oenock Indians, who commonly hired themselves out as porters and carriers to neighboring tribes. A few years later, traders' accounts located Aeno- or Eno-Town as a two-days' journey from the Occaneechi village (then located on the Roanoke River) and close to the Great Trading Path that ran roughly from present-day Petersburg, Va., to the Catawba Indian communities in South Carolina.

John Lawson, surveyor general of the colony of Carolina, tells of meeting with Eno-Will, a leader of the Eno Indians and related tribes, in his 1701 exploration. He was entertained at Occaneechi, then located on the Eno River near Hillsborough, and Adshusheer, a combined Eno, Shakori, and Adshusheer village 14 miles east of Occaneechi. Lawson's is the only extended description of the culture of these related tribes.

The combined tribes at Adshusheer suggest the decline in numbers that the individual tribes had already suffered. In 1716 Governor Alexander Spotswood of Virginia tried to settle their remnant permanently at Eno-Town to act as protection from more hostile tribes, but the governors of North Carolina and South Carolina opposed the plan. From this time on, the Eno tribe disappears from the historical record. They were possibly incorporated into the Catawba Nation. William Byrd's history of the survey of the dividing line between Virginia and North Carolina in 1729 presents an elderly, demoralized Shacco-Will, who is almost unrecognizable as Lawson's earlier dignified, respected, and responsible Eno-Will.

The First Mention of the Eno Indians, Eno River:  http://www.enoriver.org/store/journals/nativeamericanissue/1654-2/

I’m interested in knowing more. Growing up I was told my great grandmother was a descendent of the Eno tribe. Her family was one of the first families that settled along the Eno River. This is why they named Guess rd because her family was the Guess family.

I suggest taking a look at the additional resources at the end of the article as well as books in references. If your library does not have the books, they may be able to borrow from another library using Interlibrary Loan (ILL).

I'm curious about this

I'm curious about this sentence from above. "The majority of Tuscarora stayed in North Carolina and DID not go to NY and Canada. 8,000 Tuscarora families stayed in NC after the war of 1715!" Specifically where in Canada did other Tuscarora go? and who was the war of 1715 between?

I believe you meant to reply

I believe you meant to reply to a comment made earlier. I believe what the patron is saying is that although there were Tuscarora who left for NY and Canada, but there were actually many who stayed in NC.

For war of 1715, are you referring to the Tuscarora War 1711-1715? If that is the case, the war was between the Tuscarora tribe and white settlers. NCpedia has an article on the war at https://ncpedia.org/waywelived/tuscarora-war

My husband's great great grandfather John W. Powers was said to be an Eno tribal councilman. How can I find out more on this?C

Excerpt from the Book: The

"According to their tradition, the Tuscarora possessed in early times the country lying between the sea shores and the mountains which divided the Atlantic states. Lawson listed them in 1701 as having fifteen towns and about twelve hundred fighting men (about five thousand total population), giving the names of their towns as follows: Haruta, Waqui, Contah-nah, Anna Ooka, Conauh-Kare, Harooka, Una Nauhan, Kentanuska, Chunanetts, Kenta, ***ENO**, Naur-hegh-ne, Oonossoora, Toosneoc, Nonawharitse, and Nursoorooka. ENO ARE TUSCARORA BY BLOOD. ENO is just a subdivision name for Tuscarora people just like Saponi and Lumbee ( who are blood descendants of Tuscarora), why sugar coat facts of what North Carolina's evil and racist government did to hide TUSCARORA blood by making up tribal names to hold Tuscarora's under states sponsored suppression of Tuscarora Indian lineage. The majority of Tuscarora stayed in North Carolina and DID not go to NY and Canada. 8,000 Tuscarora families stayed in NC after the war of 1715! MANY were reclassified as white or colored by government to oppress and hide Indian heritage. #PaperGenocide
FACT: THE HALIWA-SAPONI DESCEND FROM TUSCARORA.
HALIWA IS A COMBINING OF THE WORDS HALIFAX AND WARREN COUNTIES.
FACT: ROBESON COUNTY COMMUNITY LEADER D. F. LOWRY TESTIFIED THAT THE LUMBEE WERE DESCENDED FROM
"AN ADMIXTURE OF SEVEN DIFFERENT TRIBES, INCLUDING THE TUSCARORA.
THE NAME "LUMBER" IS DRAWN FROM THE PRINCIPAL WATERWAY TRAVERSING ROBESON COUNTY, THE LUMBER RIVER, AND WAS CHOSEN IN A TRIBAL REFERENDUM.
http://www.papergenocide.org/north-carolinas-state-sponsored-paper-genoc...

Wrong...Eno spoke a Siouan dialect, noted by Lawson in his travels. Tuscorora was an Iroquois tribe. The Lumbee tribe is a modern day label for undefined native aboriginal peoples created by a group seeking financial gains on state and federal levels. Lumbees are an amalgem of Siouian, Algonquian, Iroquoian, African, and European peoples and have often claimed to be descendants of the "Lost Colony" to gain notoriety and support. There is no Lumbee language; a fact that prevents full recognition.

You are one thousand percent

You are one thousand percent right. Many many were classified as Coloured which we are but when they change to Afro to African American guess what we became extinct on paper. I never had a problem with Black or even Afro American as even a Samoan from American Samoa is technically an Afro-American. But they would not be African as there are black and brown people as indigenous globally. Every one chocolate doesn't have African Blood other than the fact that all humanity does truth told. But... we existed before the term African existed...therein lies the problem. I hate when people try to decide which category I fall in without asking me.

I just wentd through my

I just wentd through my medical, records. Duke did a DNA test, because I had donated my eggs to the infertility clinic. They called me in because the found a trait that was not known to be associated with Caucasion-European. My results came back as 57% Native American (ENOCH) and ?% Asian. I knew I had Native American, but the Asian just blew my mind!!!!