by Biff Hollingsworth and Tim West, Special Collections at Wilson Library at the University of North Carolina at Chapel Hill, 2008 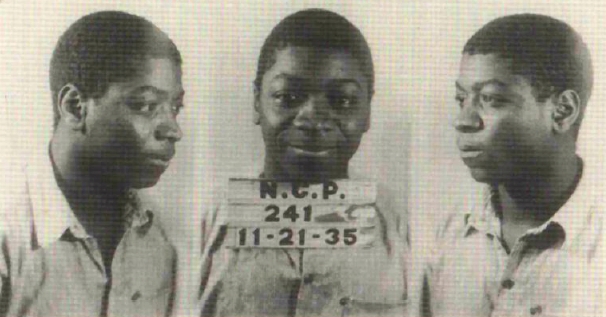 In the summer of 1935, a nineteen-year-old inmate named Allen Foster was transferred from a correctional institution in Birmingham, Ala., to the Hoke County Civilian Conservation Corps (CCC) in North Carolina. Foster's transfer appears to have been a result of Foster's own urging to have Alabama prison officials move him to North Carolina in order to start a new life away from the legal troubles that had plagued him throughout his young life. Allen Foster was sent to work on a prison road gang. According to official North Carolina prison records, Allen Foster escaped from the work camp on 28 September 1935. After his escape he assaulted a young white woman in a nearby farmhouse. Foster struck the woman over the head with a glass bottle and then demanded money from the woman. The woman complied by giving Foster five dollars, yet a struggle ensued. What happened next is unclear. In a sworn statement Foster's victim stated that Foster raped her at knifepoint. Foster denied "completion" of the act. A medical examination performed later found evidence that the woman was sexually assaulted. Allen Foster was arrested, tried in November 1935, and convicted of the capital felony of rape.

Foster's execution date was initially set for 27 December 1935. Foster's mother immediately began writing to North Carolina Governor J. C. B. Ehringhaus asking for clemency for her son. Ehringhaus briefly stayed Foster's execution so that he could study the matter. However, Foster's reprieve was short-lived. On 24 January 1936, Allen Foster was executed, becoming the first capital criminal in North Carolina to die by lethal gas.

Despite the optimism for the new official method of state executions as promoted by Dr. Charles Peterson and others, mistakes made during his execution caused Foster to suffer a prolonged death. Due to the near freezing temperature in the gas chamber, the gas failed to work effectively. It took nearly three minutes for Foster to lose consciousness. Even after that, Foster's body continued to convulse wildly for several more minutes before doctors pronounced him dead. The procedure lasted a total of eleven minutes.

Christianson, Scott. The Last Gasp: The Rise and Fall of the American Gas Chamber. Berkeley: University of California Press. 2010. 110-113. http://books.google.com/books?id=AIzaoHoggUwC&pg=PA110#v=onepage&q&f=false (accessed May 7, 2014).