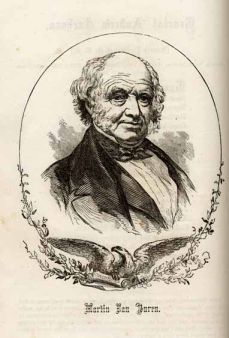 distribution of government-owned lands. Most North Carolinians probably could have accepted the Free Soilers except for their antislavery stance. Fewer than one-third of the state's whites-mostly planters-owned slaves, but most people opposed abolition and the social revolution it would cause.

During the presidential campaign of 1848, 50 Free Soil delegates met in western Orange (now Alamance) County to support their ticket of former president Martin Van Buren and Charles Francis Adams, son of John Quincy Adams. Retired state Democratic leader William H. Haywood briefly stirred up interest when he endorsed Van Buren, but Haywood and the Free Soil delegates could not entice voters to back their candidate. In the November election, of the more than 80,000 votes cast in North Carolina, Van Buren received only about 60, most of which came from Guilford County. The majority of the state's popular vote and all of its electoral votes went to Whig Zachary Taylor.

The Free Soilers achieved better results nationally, capturing 10.1 percent of the popular vote, although they failed to carry any states. The heavy support the party received in New York took votes away from Democrat Lewis Cass and helped Taylor win that state's crucial electoral votes and the presidency.

The Compromise of 1850 briefly satisfied abolitionists, and the Free Soilers lost much of their enthusiasm. In 1852 John Hale was the party's last presidential candidate, receiving 4.9 percent of the national popular vote and a total of 59 votes in North Carolina. Many Free Soilers later joined the newly formed Republican Party.

Issue of The Free Soil Banner, a newspaper published by the Free Soil Party in Indianapolis, Indiana in 1848. Available from http://digitallibrary.imcpl.org/cdm/compoundobject/collection/fsb/id/9 (accessed September 27, 2012).