Few North Carolinians know the story of the first European settlement in North Carolina. Most people are surprised that it wasn't the Lost Colony of Roanoke Island but a small Spanish fort located in present-day Burke County near Morganton.

Captain Juan Pardo built Fort San Juan in 1567 at the Native town of Joara. American Indians burned the fort the next year, and its location was forgotten for more than four hundred years. Archaeologists working at what is called the Berry site—the site is named for the property owners—in Burke County believe that they have rediscovered Joara and found remains of buildings that may have been part of the fort. The fascinating story of Fort San Juan reveals the challenges to early European efforts at colonizing what is now the United States. It also shows the tragic effects that these attempts had on American Indians.

In the fifty years after Columbus's arrival in the so-called Indies, many Spanish expeditions pushed along the Atlantic and Gulf coasts and into the interior of what is now the southeastern United States. Spain hoped to discover a passage to the Pacific Ocean, as well as to exploit the land and its resources. The Spanish viewed the American Indians as new subjects to be used and hoped they would lead them to gold and silver. Spanish conquests of Native societies in Mexico and South America had made the royal court very wealthy. However, over five decades, a series of failed attempts at exploration and colonization discovered no gold or silver. And settlement of North America would turn out to be more difficult than imagined.

For example, in 1521 Juan Ponce de Leon was the first to try and settle a colony in North America. Soon after landing on the southwest coast of Florida, his expedition was routed by Indians. De Leon and his 200 colonists retreated to Cuba. Five years later, Lucas Vasquez de Ayllón made another attempt, with 600 colonists, to establish the first European settlement in North America, probably somewhere along the coasts of South Carolina or Georgia. This site, called San Miguel de Gualdape, has never been located. It was abandoned within a few months, after the colonists were unable to get food and began to starve. Ayllón was among the many that died. Only 150 of those colonists survived to return to the Spanish colony on Santo Domingo. 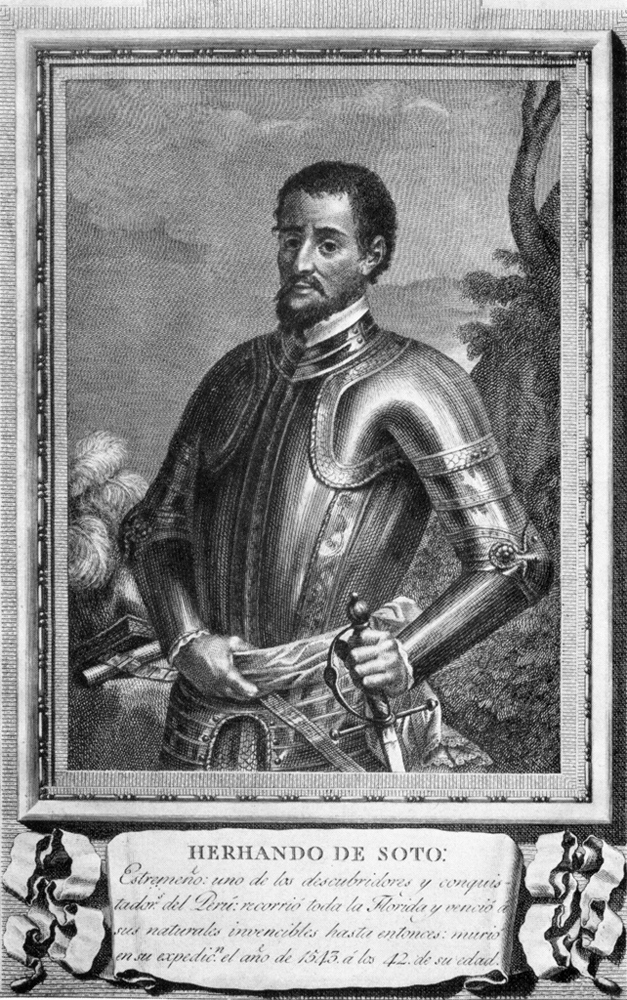 Hernando de Soto's expedition of 1539 to 1543 was the most ambitious of the efforts— and the greatest failure. De Soto and an army of more than 600 men (with more than two hundred horses) spent four years traveling through much of the Southeast, from Florida to the southern Appalachians in North Carolina and west beyond the Mississippi River. However, the men found no gold or silver. They fought a lot with American Indians. De Soto died on the banks of the Mississippi, and at the end of the four years, what was left of his army (just over 300 men) retreated down the Mississippi in a makeshift flotilla.

Other attempts at settlement failed too. It was not until 1565 that Pedro Menéndez de Avilés founded Saint Augustine on Florida's Atlantic coast. Menéndez planned to colonize all of the territory that the Spanish called La Florida, the land we know as North America. He knew that the French had built a fort nearby at the mouth of the Saint Johns River, in present-day Florida. The Spanish believed that this French presence threatened their plans, so Menéndez attacked and defeated the French there at Fort Caroline. He then sent men north to establish his capital city, Santa Elena, in Port Royal Sound on what is now the South Carolina coast.

Archaeologists working at Santa Elena—on the site of present-day Parris Island—have identified the remains of two forts associated with the town. The first was called Fort San Salvador. Some Spanish soldiers, unhappy with conditions there, mutinied, stole a ship, and returned to Cuba. Less than 40 soldiers remained at Santa Elena, short of food and arms, when Captain Juan Pardo arrived on July 18, 1566, with 250 men. Pardo and his soldiers built the second fort at Santa Elena, Fort San Felipe.

Governor Menéndez himself arrived at Santa Elena in August, and the town formally became the capital of Spain's colony. Menéndez ordered Captain Pardo to take 125 soldiers and build a road to Mexico. At this time, although the Spanish had thoroughly mapped the Atlantic and Gulf coasts, they did not understand just how far it was overland from the Atlantic Ocean to Mexico. Based on the reports of the de Soto and Francisco Vásquez de Coronado expeditions, they mistakenly thought that the eastern Appalachians and the western Rockies were parts of the same mountain chain!

Several documents record Pardo's two expeditions. (The first lasted from December 1, 1566, to March 7, 1567, and the second, from September 1, 1567, to March 2, 1568.) These include a short letter written by Pardo himself and a longer account written by the expedition's scribe, Juan de la Bandera. These and other sources tell us that Pardo followed Indian trails north from Santa Elena into North Carolina. Stopping at a succession of American Indian towns, he briefly traded with the chiefs—and told them they were now subjects of the king of Spain. The documents usually list what types of items the Spanish gave to the Indians: iron axes, chisels, wedges, or knives, glass beads and ornaments, and cloth. It is unlikely that the Indians understood Pardo's mission, or their new status with the Spanish crown. But they seemed to receive Pardo and his men peacefully, for the most part.

Traveling up the Catawba River valley, Pardo reached the town of Joara in early January 1567. This seems to have been the largest and possibly most powerful of the Native towns in North Carolina's western Piedmont. Joara also may have controlled important trading paths from the Piedmont into the mountains. Here, Pardo built his first fort, Fort San Juan, named after himself and because the Spanish arrived there on the Day of San Juan. (He renamed the Indian town, Cuenca, after his hometown in Spain.) Thus, Pardo established the first European settlement in North Carolina. (We have no evidence that earlier expeditions into the interior built any intentional settlement. They only used American Indian settlements and scavenged from them for short times.)

Seeing the snow-covered Blue Ridge Mountains to the west, Pardo decided to go back to Santa Elena. He planned to return and make his way west (toward Mexico, he thought) in the spring. He left 30 men stationed at Fort San Juan and stopped at several Indian towns on his way to Santa Elena. The Spanish documents tell us that over the next few months, some men left at Joara traveled into the Mountains to search for "crystals" and gold. Under a Lieutenant Moyano, 20 men traveled all the way into southwest Virginia and northeast Tennessee. Making threats against the Indians there proved foolhardy. Moyano and his group were surrounded and held hostage until they were saved by Pardo's return in the spring.

Pardo then decided that the original plan to establish a road to the west was too hazardous and retreated to Fort San Juan. Again, we learn interesting tidbits about the American Indians from the Spanish documents. According to Bandera's account, Pardo met with more than twenty-four chiefs (probably representing as many towns) at Joara, and Joara Mico was the most powerful. The chiefs' names also reflect different Indian languages. Based on phonology, or word sounds, the chiefs named Tocae, Atuqui, and Guanbuca were probably Cherokee speakers, for example. Guenpuret and Qunaha may have been Catawban.

Pardo went back to Santa Elena in March 1568. He left a total of 120 men stationed in five small forts (one in east Tennessee, two more in North Carolina, and two in South Carolina). Pardo never returned to his settlements. Spanish sources indicate that American Indians destroyed the forts in May 1568. A single survivor, Juan de Badejoz, described Indians luring the Spaniards from Fort San Juan and killing all except himself. He hid in the woods and spent thirty days walking to Santa Elena, hiding by daylight and moving in darkness. 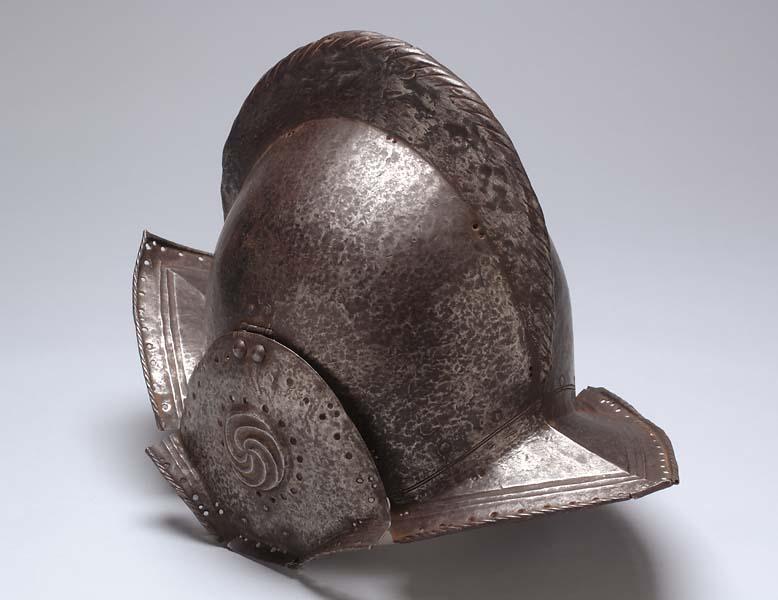 History tells us no more about Joara and Fort San Juan. However, we know that the failure of the forts struck yet another blow to Spanish attempts to settle the greater Southeast. They made no further efforts to move into the interior. And facing poor resources and hostile Indians, the Spanish even took apart Santa Elena and moved their capital to Saint Augustine in 1587.

None of Pardo's forts had ever been located until recently. Now archaeologists from Warren Wilson College near Asheville, the University of Oklahoma, and Tulane University are studying the Berry site for clues to the fate of Fort San Juan. These researchers hope to find out more about how the Spanish soldiers interacted with their American Indian hosts. What is clear so far is that the arrival of the Spanish armies in the Catawba River valley changed the Indian cultures forever. It is thought that many of the Natives living in this region died from European diseases such as smallpox between 1568 and 1700. What had been a heavily populated valley was mostly abandoned, until new immigrants from the northern colonies began moving into the area in the late 1700s.