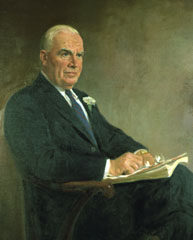 After a career in business, Luther H. Hodges (1898-1974) made industrial development the hallmark of his administration and was instrumental in the establishment of the Research Triangle Park. The “Businessman Governor” was born in Pittsylvania County, Virginia, on March 9, 1898, to tenant farmer John James Hodges and the former Lovicia Gammons. Soon after his birth the family moved the short distance across the border to Spray (present-day Eden), North Carolina, where his father took a job in a textile mill. Luther Hodges served as a second lieutenant in World War I and in 1919 graduated from the University of North Carolina. He returned to Spray, where at age twelve he had worked as an office boy in a mill, to take a position as secretary to the general manager of the Marshall Field and Company mills. In 1922 he married Martha Blakeney of Union County; they would have three children. After her death in a house fire in 1969, he married Louise Finlayson in 1970.

Hodges remained with Marshall Field all of his business career, rising from personnel manager to general manager and, from 1943 until his retirement in 1950, vice-president. While residing in North Carolina, he served on the State Board of Education and the State Highway and Public Works Commission. In 1944, while living in New York, he served as chief of the textile division for the Office of Price Administration. In 1950 he headed the industry division of the Economic Cooperation Administration in West Germany, as part of the Marshall Plan, and in 1951 he was a consultant to the State Department regarding European industrial development.

In 1952 Hodges, with his wide administrative and management experience, launched a bid for lieutenant governor and, after a vigorous campaign to establish his name across the state, led a field of four Democratic aspirants. The second place finisher did not call for a runoff and Hodges won in the fall. On November 7, 1954, Governor William B. Umstead died and Hodges became governor. In 1956, with only token opposition from within the party, Hodges was the Democratic nominee and easily defeated Republican Kyle Hayes in the fall. Hodges served as governor for six years and two months, longer than any chief executive of North Carolina to that date.

Hodges’s greatest challenge was one he inherited. With the advice of a panel appointed by Umstead and headed by Thomas Pearsall, the governor crafted a moderate stance toward integration of the public schools. The Pearsall Plan provided for payment for private schooling of any child assigned against the parents’ wishes to an integrated public school and permitted local citizens by a majority vote to close schools. The plan lessened, but did not eliminate, public fears, and the state, unlike others in the South, moved slowly but peacefully toward integration. In 1959 Hodges did dispatch the National Guard to Henderson to halt textile strike violence. 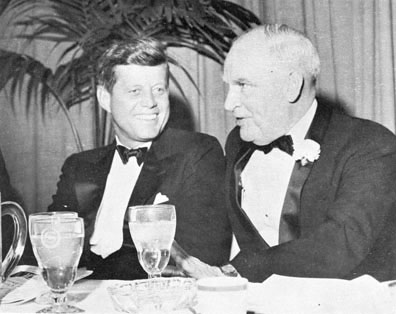 Hodges’s strong drive to recruit new industry, domestic and foreign, brought the state favorable national publicity. His greatest success was the Research Triangle, the business park founded in 1956, which he called the “heart and hope of North Carolina’s industrial future.” As governor Hodges sought to apply business management principles to state government, in part by creating the Department of Administration. He reorganized the State Highway Commission to lessen political influence and separated state prisons from that board.

Shortly after Hodges’s term as governor ended, President John F. Kennedy selected him as Secretary of Commerce. He served in that post until December 1964. Thereafter his energies were directed largely to the Research Triangle Foundation, which he served as board chairman from 1965 to 1972, and Rotary International, which he served as president in 1967. Hodges retired to Chapel Hill and died on October 6, 1974. A Methodist, he is buried in Overlook Cemetery in Eden.