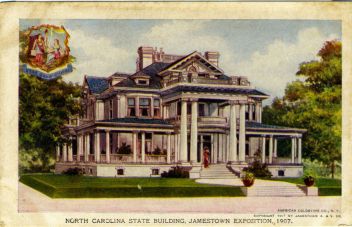 The Jamestown Exposition of 1907 marked the threehundredth anniversary of England's first permanent American settlement at Jamestown, Va. Held along two miles of the Norfolk, Va., waterfront from 29 April to 1 December 1907, the exhibition's purpose was to educate people on the growth and expansion of the United States since 1607 and to encourage American patriotism. Including North Carolina, 26 states took part in the exposition. An active participant, North Carolina provided exhibits related to agriculture, horticulture, textile manufacturing, mining, tobacco, furniture, lumber, and pottery, as well as contributing the North Carolina Historical Exhibit in the exposition's Palace of History.

Three women curated and maintained the North Carolina Historical Exhibit, one of only two state exhibits organized by women. Mrs. Lindsay Patterson, the North Carolina vice president general of the Daughters of the American Revolution, planned the exhibit. Patterson and two assistants organized a statewide collection campaign, locating numerous artifacts dating from the colonial and revolutionary periods of the state's history. The women used funds allocated from the state legislature and the North Carolina Historical Commission for the project, and representatives in each of the state's major cities helped organize the collection of the "relics." All of the artifacts, including a large exhibit on Moravian life organized by the Wachovia Historical Society, were assembled into an exhibit describing the history of North Carolina's settlement and growth.

The exhibit included many paintings of important historical figures from North Carolina's early history. The walls were hung with images of the state's three signers of the Declaration of Independence (William Hooper, John Penn, and Joseph Hewes), as well as copies of John White's drawings of North Carolina's native peoples. Silver items, pieces of furniture, manuscripts, miniatures, Revolutionary War-era weapons, and clothing and other textiles were packed into the exhibit space. Many of the items were directly associated with notable events, historical places, or important characters in the state's history. The exhibit featured a silver teaspoon owned by William Hooper, a miniature portrait of Judge James Iredell, and a full-size portrait of Winifred Hoskins, secretary of the Edenton Tea Party. Signed letters from the Marquis de Lafayette and the gun owned by Governor Jesse Franklin (who fought at the Battle of Guilford Courthouse in 1781) were displayed as well. The exhibit also represented women as important participants in early North Carolina history by including a china plate owned by Edenton Tea Party participant and tavernkeeper Elizabeth Horniblow, a glass cologne bottle owned by Dolley Payne Madison, and the white satin slippers of the wife of Governor James Turner (1802-6).

For their efforts, the organizers of North Carolina's Historical Exhibit won a silver medal of merit. Many of the "relics" were returned to their owners, but some of the artifacts were preserved in the collection of the North Carolina Museum of History in Raleigh.

You may be able to find information is this publication from our library's digital collection, which is a report of the North Carolina commission for the 1907 expo. https://digital.ncdcr.gov/digital/collection/p249901coll22/id/463741/

If that does not help, I would suggest contacting the Museum of Art. Their library may have more information to help you. Their website is at https://ncartmuseum.org/

I recently purchased a

I recently purchased a postcard depicting the North Carolina state building at the 1907 Jamestown exposition. I know that some structures at the various expos were slapped together with plaster and chicken wire, but the NC state building looks fairly substantial. Do you know what happened to it, still standing, razed, moved ? Thanks.

There is an exact replica of

There is an exact replica of the North Carolina House in Dunn NC.
It was built by Kenneth Howard in 1907-1908. He got the plans at the exposition.

It is run by the Women's Club, they have weddings there. (The Howard House)

I do not think it is still standing since many of the items were given back to donors or sent to the North Carolina Museum of History. I recommend checking out the catalog prepared by Mary Hillard Hinton (http://digital.ncdcr.gov/cdm/compoundobject/collection/p249901coll22/id/...).

I have a glass resembling a

I have a glass resembling a shot glass: red glass at the top and clear cut glass at the bottom with "1907" etched into the red area. What might be a snail is etched above the 1907. Might it be from your Exposition ?

Thank you for visiting NCpedia and for sharing your artifact with viewers.  That sounds like a very interesting item and may be a good assumption as to its origin.

We don’t have anything else in NCpedia that would help with this and I have also looked at the collections database for the NC Museum of History and don’t see anything that matches.  My best suggestions are to contact institutions in Virginia – particularly the Virginia Historical Society and the Library of Virginia.  I think they would be the best place to start with your question.  You may also want to contact an antiques dealer.  And a final thought is to look for books or catalogs produced for the event or afterwards.  Here is a link to search results in WorldCat: https://www.worldcat.org/search?q=su%3Ajamestown+exposition&qt=advanced&....  WorldCat is an online catalog that searches holdings of libraries across the world, and for a given item, you can view libraries that may have the book in their collection.  You may be able to obtain a book through interlibrary loan with your local library.

And here are the websites for the Virginia Historical Society and the Library of Virginia:

I hope this helps!  Please let me know if you have any additional questions.