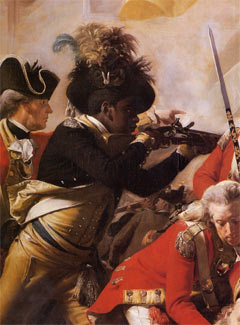 For black slaves, the presence of British forces presented an opportunity for independence and a new life as Loyalists. At the start of the conflict, British commanders offered freedom to enslaved blacks who would join them. Such proclamations were pragmatic efforts to weaken the rebels. They were framed by military and political considerations, not humanitarian ones. Even so, during and after the war philanthropists and advocates of emancipation in Britain provided practical assistance to former slaves who had managed to leave with the British and maintain their freedom. For black North Carolinians, the chief opportunities to escape slavery in this way came near the beginning and the end of the war, when British forces were nearby. The pro-British Black Pioneers originated with the 1776 exodus. Black sergeants Thomas Peters and Murphy Steel were crucial leaders in this corps, although their commanding officer was a white North Carolinian, Allen Stewart. For larger numbers of African Americans, however, the British installations at Wilmington and Charles Towne were magnets during 1781 and 1782.

For a self-emancipated black Loyalist, serving in the British war effort did not guarantee either personal liberty or eventual economic independence. For one thing, white Loyalists might claim them as property, legally or not. In addition, once the war's outcome became clear, victorious revolutionaries tried to bargain with the departing British and Loyalists for the return of former slaves. The fact that revolutionaries and Loyalists had stolen slaves from each other throughout the war increased confusion and complicated official efforts to sort out ownership.

Black Loyalists served in many capacities: as artillery workers, laborers for myriad tasks of construction and military engineering, trumpeters, drummers, guides, sailors, laundresses, cooks, personal servants for privileged officers, foragers, and pilots for other fugitives. A few black men ended the war as privates in the Royal North Carolina Regiment. From Charles Towne and New York, black North Carolina Loyalists dispersed as free people largely to East Florida and Nova Scotia, where they faced further threats to their independence.