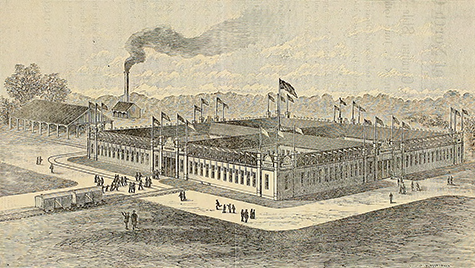 The North Carolina Exposition of 1884, promoting the agricultural and mechanical arts, was an important step in the progress of the state's industrial growth. The aim of the exposition was to boost North Carolina's industrial development and propel the state to a leadership position in the New South. The event was also designed in part to demonstrate to residents and outsiders alike that the state had recovered from the Civil War.

The exposition was held in October 1884 on a 55-acre tract on the north side of Hillsborough Street in Raleigh (the site of the North Carolina State Fair from 1873 to 1925). The exposition's history is linked to the development of its neighbor on the south side of Hillsborough Street, the North Carolina College of Agriculture and Mechanic Arts (present-day North Carolina State University). Exposition president William S. Primrose, a Raleigh insurance executive, served as the first chairman of the trustees of that land grant college, chartered in 1887.

In 1884 Primrose organized the state's business elite behind his idea of a large exposition. Such exhibitions were then in vogue, with the 1876 Philadelphia Exposition counted as a major success. The date of the North Carolina Exposition was selected to coincide with the 300th anniversary of the first of the Roanoke voyages. The organizational meeting took place on 30 January at the State Capitol, where Primrose took the leadership role and Salem businessman Henry E. Fries was elected secretary. In the weeks following, Primrose and Fries scoured the state, drumming up interest in the exposition. They had the assistance of nine vice presidents representing each of the state's congressional districts. Fries also made out-of-state visits to population centers along the East Coast, in time visiting more than 350 companies to promote the event.

A massive, square exhibition building, measuring 336 feet on each side with a 100-foot-square courtyard in each quadrant, was constructed over the course of the summer. The exposition operated from 1 Oct. to 1 Nov. 1884, with the traditional North Carolina State Fair and the state fair for blacks as adjuncts. On display were the finest products of the state's forests, farms, mines, and factories. Counties competed for the best exhibit, with those representing Durham and Forsyth generally judged to be the best. Many North Carolinians gained their first introduction to electric lights at the exposition. It all constituted one of the most impressive displays in North Carolina history.

Attendance, however, estimated at 60,000 over the course of four weeks, failed to meet the expectations of organizers. Even more disappointingly, no large-scale northern investment resulted from the event despite the best hopes of the planners. Fries in 1912 wrote to state leaders to inquire about the 1884 exposition's impact. All agreed that the exposition had boosted commerce and had inspired numerous North Carolinians, who returned to their communities with new enthusiasm for industrial development.