From the mid-1870s until World War I, any building used for presenting entertainment on stage was popularly called an "opera house." The term was something of a euphemism: despite the popularity of live theater during the period, an antitheatrical prejudice was still in evidence; calling a hall an opera house lent an air of respectability to the act of play-going. Except in larger North Carolina cities such as Charlotte, Raleigh, and Wilmington, very little grand opera was actually presented. Other terms used to describe theaters included academy of music, auditorium, or town hall. 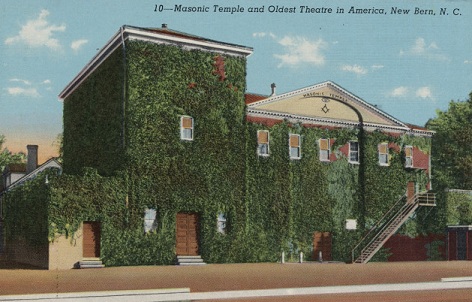 The oldest surviving opera house in North Carolina, New Bern's Masonic Temple Theatre, was built between 1801 and 1804 as part of the Masonic Lodge. Most early halls were converted out of available space in the upper floors of existing buildings: Raleigh's Tucker Hall and Fayetteville's Williams Hall were in commercial buildings, and Greensboro's Benbow Hall and High Point's Jarrell's Hall were in hotels. Some were built as part of a city hall or other municipal structure; certainly North Carolina's most famous opera house, Wilmington's Thalian Hall, comes under this heading, but there were also opera houses as part of municipal buildings in Apex, Belhaven, Dunn, Durham, Greensboro, High Point, King's Mountain, Oxford, Raleigh, Randleman, Smithfield, Tarboro, Warrenton, and Washington.

The typical opera house manager was a local businessman for whom running a theater was a sideline. Managers were jewelers, grocers, carpet dealers, pharmacists, lawyers, bankers, physicians, or even railroad agents. When the hall was associated with a lodge such as the Masons or the Elks or one of the local militias such as the Fayetteville Independent Light Infantry, management was one of the responsibilities of being an officer. If the hall was located in a municipal building, the manager might be a city official.

One profession that did have a direct relation to opera house management was that of bill poster. A bill poster was responsible for putting up the posters that were the primary advertising medium for touring theatrical troupes, particularly in towns that had no daily newspapers. These bill-posting companies developed into the modern outdoor advertising industry.

The most significant figure in theatrical management in North Carolina during this period was Wilmington's S. A. Schloss, as he was the first, and for many years the only, manager to devote his energies primarily to running a theater. Starting with the Wilmington Opera House (Thalian Hall) in 1895, Schloss acquired leases on opera houses in Raleigh (1898), Greensboro (1901), Charlotte (1903), Winston-Salem (1905), Asheville (Grand Opera House, 1906), and Monroe (1907); Tarboro, Goldsboro, and Wilson (1908); Concord (1909); and again in Asheville (the Asheville Auditorium, 1910). At the height of its success, the Schloss Theatres Circuit controlled 14 opera houses in North Carolina, South Carolina, and Virginia. 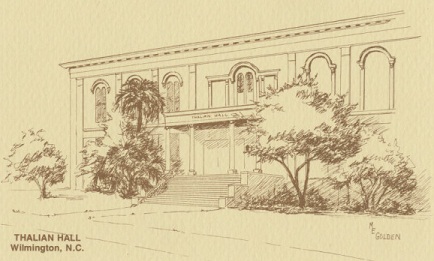 A major factor in Schloss's operations and the operations of every opera house manager was the so-called Theatrical Syndicate. This organization, whose booking office in New York City was run by Marc Klaw and Abraham Erlanger, controlled most of the major touring attractions that might play a larger town and all of the smaller attractions that would play the smaller towns. Klaw and Erlanger controlled the bookings of every opera house in North Carolina, either directly, through lessees such as Schloss, or indirectly, since managers who refused to deal with the syndicate or whose towns were too small for the syndicate to be interested in could not get even second-rate attractions.

The term "attraction" was used to cover a wide variety of presentations, including plays, musicals, minstrel shows, vaudeville, motion pictures, lectures, or concerts. A company that produced a single play or musical comedy (a recent New York success), carried its own star, supporting cast, and scenery, and played one-night stands was called a combination company. Troupes that played a week in each town (six nights with two matinees, no Sundays), had a selection of plays (nonroyalty plays or old chestnuts that had long since lost their value to the combination companies), and used the stock scenery provided by each opera house were called repertoire companies. The straight plays were generally melodramas such as East Lynne or Ten Nights in a Bar Room, though farces like Charles Hoyt's A Trip to Chinatown (one of the sources for Hello, Dolly) were nearly as popular.

Minstrel shows reached their peak of popularity in the 1870s but were still part of an opera house season as late as the 1920s. Vaudeville, a descendant of the minstrel shows, was part of the program for many touring repertoire companies, though by the years immediately preceding World War I there were specific opera houses in North Carolina that ran vaudeville exclusively. The motion picture as an attraction had made its debut in North Carolina as early as 1900, usually as part of a vaudeville bill. By 1910 there were halls in the larger North Carolina towns devoted exclusively to movies, and by the end of World War I movies had become the primary source of popular entertainment. Some halls in the larger cities continued to present live theater into the 1920s, but by then "the road" was dead and the era of the opera house was over.