The Pardo Expeditions were significant for the information their records provide on the locations of mid-sixteenth century Native American towns and villages in South Carolina, North Carolina, and 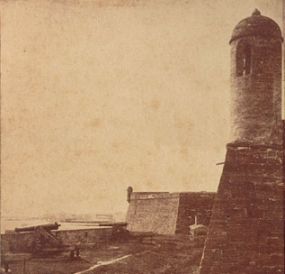 Tennessee. Juan Pardo served in the Spanish Indies fleet under Capt. General Pedro Menendez de Aviles, who in April 1566 founded the town of Santa Elena at modern Parris Island, S.C. At Santa Elena, which was to be the capital town of the Spanish territories in North America, Menendez ordered Pardo to explore the interior, subdue the Indians, and find a route to Zacatecas, Mexico, over which the Spanish could transport their silver without threat from French and English ships in the Gulf of Mexico and along the Atlantic Coast of Florida. This ill-conceived order resulted from the Spaniards' poor understanding of the geography of the lands north of the Gulf of Mexico; they vastly underestimated the overland distance from the Atlantic Coast to northern Mexico.

Pardo and 125 soldiers left Santa Elena on 1 Dec. 1566, headed north, and several days later arrived at the Indian town of Guiomae on the Congaree River. Continuing north along the Wateree, they arrived at Cofitachequi (near present-day Camden, S.C.), apparently the same town visited in 1540 by the Spaniard Hernando De Soto. From Cofitachequi they followed the Wateree/Catawba River north, reaching the Indian towns of Tagaya, Tagaya the Lesser, Yssa, and finally, Joara, believed to be located in present-day Burke County, N.C., near the foot of the Blue Ridge Mountains.

Pardo and his men were unable to enter the mountains because of heavy snow. They stayed at Joara for two weeks while the soldiers built a small fort, Fort San Juan de Xualla, which Pardo left garrisoned with 30 men under Sgt. Hernando Moyano de Morales. The fort, believed to be situated on the modern Cherokee Indian Qualla Boundary in Swain County, consisted of a blockhouse and presumably a stockade. Pardo and his remaining troops traveled east along the Catawba River to Quinahaqui, near present-day Catawba. From Quinahaqui, they appear to have moved east, leaving the Catawba River, and two days later arrived at Guatari, possibly near present-day Salisbury.

At Quinahaqui, Pardo had received word that Santa Elena was threatened with a French attack. He left for Santa Elena immediately (leaving one chaplain and four soldiers garrisoned at Quinahaqui), traveling south to Otariyatiqui (believed to be near Charlotte) and Aracuchi, then meeting his original trail north at Tagaya the Lesser. He arrived in Santa Elena with about 90 men on 7 Mar. 1567.

Pleased with Pardo's report of excellent lands, Menendez ordered Pardo to undertake a second expedition to locate the best road to Zacatecas and to take possession of all the lands for the king of Spain. Pardo left Santa Elena to return to the interior on 1 Sept. 1567. The record of the towns visited and chiefs met is much more detailed than for the first expedition. The route seems to have differed slightly from the earlier expedition, but Pardo and his men once again traveled into the Catawba Valley and met Indians at the towns of Otari, Quinahaqui, and Guaquiri (now near Hickory). On 24 September they arrived at Joara, where Pardo received word that Moyano was besieged by Indians at Chiaha. Pardo then traveled into the mountains to the town of Cauchi and then on to Chiaha, which he reached on 7 October.

Finding Moyano safe, Pardo returned to Fort San Juan, arriving on 6 Nov. 1567. After resting with his men for two weeks, he left 31 of them garrisoned at San Juan and began his return to Santa Elena, building two more forts-Santiago and Santo Tomás-along the way. They finally arrived at Santa Elena on 2 Mar. 1568. Pardo never returned to the interior, nor were other expeditions sent out from Santa Elena. It is believed that the forts were soon abandoned.