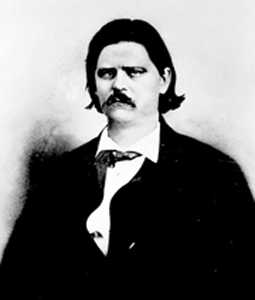 "Redeemer Democrats" was a self-imposed term used by nineteenth-century southern Democrats fond of talking about "redeeming" their states from the alleged "misrule and corruption" wrought by Republican carpetbaggers, scalawags, and their black allies who assumed control as Congressional Reconstruction began in 1867-68. The Ku Klux Klan and similar domestic terrorist organizations played an important role in helping the Democrats reach their goal, which was done at different times between 1869 and 1877 in various southern states. Many Redeemer Democrats, or Redeemers, such as Zebulon B. Vance of North Carolina and Wade Hampton of South Carolina, had been Whigs before the Civil War. During Reconstruction, Democrats (temporarily also called "Conservatives") sought to bring as many voters as possible into "the white man's party." By the 1890s the Redeemers lost control of the southern Democratic Party, and more rabid racists, intent on disfranchising black voters, gained control of the party and of the governments of southern states.

i love this site

i love this site

Awesome! I learned a lot!

Awesome! I learned a lot!

Thank you for the NCpedia. I

Thank you for the NCpedia. I had not heard of the term "redeemer" as used in nineteenth century post reconstruction political thought: I googled the term and, voila, it sent me to your web site.
Thank you.
Jim Robinson