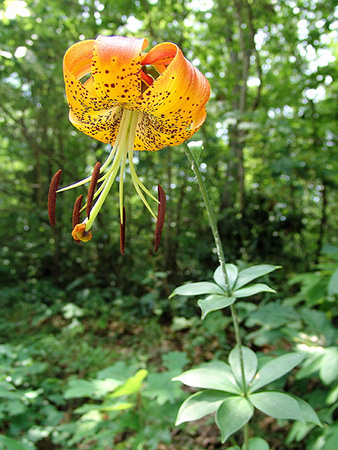 The bill to adopt the Carolina Lily as the State wildflower was sponsored by Rep. Rex Baker of Stokes County. Baker and his wife developed an affinity for the Carolina Lily when they rescued a cluster of the flower from being bulldozed in a road-widening project and transplanted them at their home. Baker spent two years trying to pass his bill, being postponed initially by the 2001 debate surrounding the adoption of the state fruit. In an effort to convince Governor Mike Easly of the merits of the Carolina Lily, Baker took a photograph of his own. Easley liked the photograph so much it hung in the Governor’s mansion for six weeks. The bill passed in the House of Representatives with a 111 to 7 vote and passed unanimously in the Senate.

Baker’s reasoning for the Carolina Lily as the state wildflower was that it is a beautiful flower that occurs throughout the state.

About the Carolina Lily

Named for Andre Michaux, a noted eighteenth century naturalist and explorer, this flower grows throughout the state, from the forests and hills of Cherokee County to the coastal swamplands (pocosins) of Hyde and Pamlico Counties. Michaux made a number of trips to North America, comissioned by the French government to study the continent's trees. Beginning in 1787, he made five trips to North Carolina from a base at Charleston, South Carolina. He made a number of important discoveries in the region.

The stem can grow up to 4 feet high, and can have up to 6 flowers at the summit, though 1-3 are more common. The petals are brilliant red-orange with brown spots, and arched back so that the tips overlap.

The Carolina Lily grows throughout the southeast, from West Virginia to Florida, and can bloom as late as October, though it is most prevalent in July and August. It is not endangered but it is rare, as the plants are slow growing and do not produce many seeds

Here is the language specified in the legislation establishing the Carolina Lilly as the State Wildflower:

I have to do an assignment

I have to do an assignment on all 24 state symbols

is the carolina lily rare

is the carolina lily rare

Yes it is a rare find

Yes it is a rare find

I have to do a state symbol

I have to do a state symbol every week (including holidays)