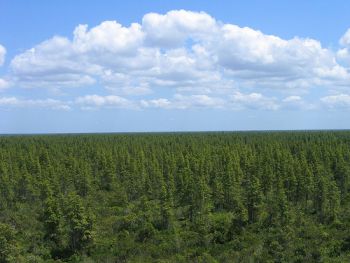 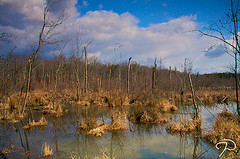 Wetlands is the descriptive and legal term for many thousands of acres in North Carolina. Most broadly, wetlands encompass all lands that are generally, frequently, occasionally, or intermittently submerged, coursed across, soaked, touched, or in some way affected by water, whether by lunar or wind tide, rainfall, or seasonal flood. These include every sort of terrain, such as coastal marsh (the vast Cedar Island marshes in Carteret County), river swamp (the Roanoke River bottomlands of Northampton, Halifax, Bertie, Martin, and Washington Counties), pocosin thickets, Carolina Bays, and even the small fen nearly a mile high atop Bluff Mountain in Ashe County.

The U.S. Environmental Protection Agency in 1985 cited the factors endangering North Carolina's pocosins. Federal and state environmental restrictions on what use, if any, may be made of particular wetland parcels now affect virtually every sort of agricultural, municipal, and resort development, particularly in the river, swamp, and sound country of North Carolina's coastal plain. While the ecological and environmental values of these areas-as wildlife habitats, seafood nurseries, and pollutant filters-are today far more acknowledged and appreciated than they were only a generation ago, there has been and continues to be much controversy over the designation and subsequent governmental regulation of wetlands. In some cases under current law and practice, a property owner may be allowed to fill or otherwise alter one wetland tract if another tract, similar in size and nature, is set aside in perpetuity as a "mitigation" property. With population in the state's coastal counties rapidly rising, the nature and care of wetlands will continue to be a central matter of public land-use policy in North Carolina.