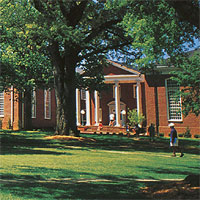 Wingate University was established in 1896 in Union County, 26 miles southeast of Charlotte, by the Baptist Associations of Union County, N.C., and Chesterfield County, S.C. The school was built on a ten-acre tract that boasted fine oak trees, an all-weather spring, close proximity to the Meadow Branch Baptist Church, and access to the Seaboard Air Line Railway. It offered a complete education from first grade through high school. The trustees, led by John W. Bivens, named the new school for Washington Manley Wingate, a successful president of Wake Forest College.

As the state expanded its public schools, Wingate's enrollment gradually moved toward boarding students in the upper years of high school. In 1923 Wingate became a college, offering the first two years of general education leading to a baccalaureate degree. In the same year, the school became one of several colleges supported by the Baptist State Convention of North Carolina. The economic crisis of the stock market crash and Depression in the 1930s pushed Wingate to the edge of extinction. The convention withdrew support in 1930, students had no money for tuition, and faculty salaries went for the most part unpaid. The administration building burned to the ground in 1932. But school president Coy Muckle and a few determined teachers opened the spring session in the rooms of Wingate Baptist Church, adjacent to the campus. Within a few years a new central building arose on the ashes of the old, attesting the determination of the trustees and local Baptists to keep the school alive. That central building, memorializing President C. C. Burris, who guided the institution from 1936 to 1953, remains as the home to the liberal arts instruction of the college.

The North Carolina Baptists resumed financial support of the college in 1949, and the Southern Association of Colleges and Schools granted membership and accreditation for Wingate in 1952. In 1955 Charles A. Cannon of Kannapolis became interested in the school. Cannon saw Wingate as a place where the children of textile workers and others in the middle class might receive an opportunity to attain higher education. He began to invest in the renewal of the physical plant and the expansion of the curriculum, providing first-class facilities for the growing student body, which reached 1,500 in the late 1960s.

In 1977, under the leadership of Thomas E. Corts, Wingate added upper level college courses and majors, granting its first baccalaureate degrees in 1979. Also in 1979, the college launched Winternational, a program of international study and travel for sophomores; the school built into its tuition the cost of an international experience during the Christmas holidays so that all students could spend ten days in London, Paris, or Amsterdam. Other majors and graduate work in education and business were added during the 1980s, eventually gaining Wingate university status. Modern-day Wingate University has approximately 1,300 students and offers 36 undergraduate majors and 2 graduate programs.