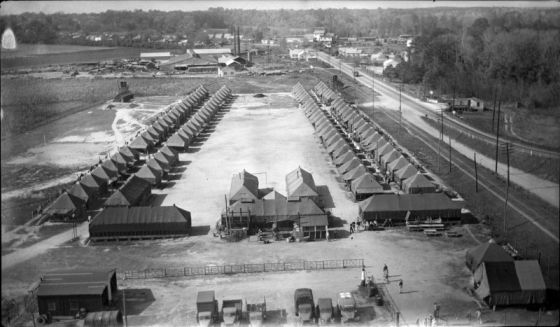 About 10,000 German POWs were detained at 18 military installations in the state. In North Carolina, as throughout America, German prisoners participated in compulsory work programs until their forced repatriation to Germany in the spring of 1946. The first German POWs to enter the country came from the U-352, sunk by the Coast Guard cutter Icarus off the Outer Banks on 9 May 1942. After their initial debarkation at Charleston, S.C., the survivors from the original 44-man crew were taken to Fort Bragg and later transferred to locations outside North Carolina.

In the spring of 1944 the federal government created a nationwide POW program to bolster a waning cadre of civilian and military maintenance workers on military bases and to assist the civilian war-related industries of farming, lumbering, and pulpwood cutting. North Carolina's first German POW work contingents, mostly prisoners from Field Marshal Rommel's Afrika Korps, captured in Tunisia in May 1943, arrived at Camp Davis, Camp Mackall, Camp Sutton, and Wilmington Naval Hospital (New Hanover County) in the spring of 1944. By the fall, after the Allied invasion of Normandy, the POW program in North Carolina, and across the United States, had expanded further. Administered through two major base camps at Fort Bragg and Camp Butner, the state added five more branch camps. There were 300 to 500 prisoners each at Ahoskie, Goldsboro (Seymour Johnson Air Force Base), New Bern, Williamston, and Winston-Salem. A year later still more camps were established as branches of Camp Butner at Moore General Hospital in Carthage, Edenton, Greensboro, Hendersonville, Roanoke Rapids, Scotland Neck, and Whiteville.

Approximately 3,000 Italian POWs-later given relative freedom and new opportunities when Italy received Allied status in the fall of 1943-arrived at Camp Butner in September 1943. By October these prisoners were engaged in work projects such as road building, social conservation, and farming. Branch camps for 500 men each were also set up for picking peanuts in Tarboro, Windsor, and Scotland Neck. New volunteer Italian Service Units were activated by mid-February 1944, and volunteers were transferred to various training centers, including Camp Sutton, which operated as a POW camp starting in March 1944; the camp held 3,500 Italian collaborators until July 1944 and 1,000 German POWs until March 1946. The Italian POW base camp at Butner and its branch camps were phased out and replaced by German POW encampments by May 1944; the Italian POWs, found to be difficult to handle, were relocated outside the state by the end of July. 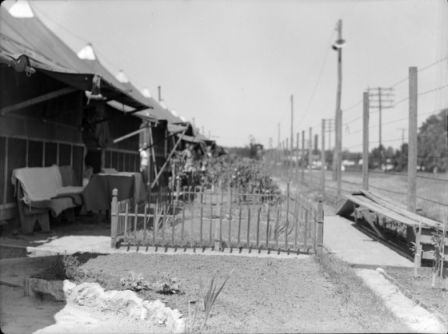 Camp Butner was the most unusual POW facility in North Carolina. This 5,000-man camp housed a compound of between 700 and 900 non-German, anti-Nazi prisoners who had been captured as members of the German armed forces. Most were Poles, Czechs, French, and Dutch, but there were also Belgian, Russian, and even Mongolian prisoners. About 500 POWs, chiefly Czechoslovakians and Poles, were repatriated to their own national armies after appropriate screening.

A covert national program for the reeducation and democratization of Germans had its most obvious successes at Camp Butner, Fort Bragg, and Camp Mackall. Selected American films and courses in American geography, history, and politics, provided under the rubric of "intellectual diversion," were intended to attract POW interest and change attitudes. After the war ended in Europe, POWs were shown films of the liberated German concentration camps. After viewing such a film at Camp Butner, 1,000 Germans burned their Wehrmacht uniforms voluntarily. At Fort Bragg, beginning in July 1945, army education officers taught 36 courses weekly; of special interest to the POWs were classes on agricultural science, industrialism around the world, and South American and African geography. By late 1945 officers at Fort Bragg claimed, with both pride and exaggeration, that 95 percent of their POWstudents were familiar with American life and democracy. In September 1945 the POWs at Camp Mackall formed four political parties and elected a camp spokesman and company leader.

North Carolina's POW experience was further distinguished by a successful escape. Kurt Rossmeisl, a former member of Field Marshal Rommel's elite 10th Panzer Division, fled from Camp Butner on 4 Aug. 1945. He lived in Chicago under the name of Frank Ellis until 1959, when he turned himself in to the Cincinnati, Ohio, field office of the Federal Bureau of Investigation.

I have a book from the POW

I have a book from the POW library (stamped as such) at camp Butner. I would donate it to the Society if they would like it for their archives. Should I contact them or do you have a contact.
I inherited it from family connected with the Dept. of the Interior in Eastern NC.

I would like to know about Italian POWs in Tarboro. I am seeking information on the musical presentations they supposedly presented on the Town Common in Tarboro. Is there information about these Performances?

Were there any POWs that died

Were there any POWs that died at Camp Hoffman? If so where were they embalmed and buried.

Thank you for visiting NCpedia. It is possible to search Ancestry.com for a NC death certificate without a name and specify the NC county Camp Hoffman (now Camp Mackall) was in and the birth place as “Germany” to see who died there during the war years. Death certificates usually indicate where a body is to be buried. Your local public library may have a subscription to Ancestry. The book, Nazi POWs in the Tar Heel State by Robert D. Billinger, might also contain helpful information and be available through a public library. I hope this helps.

How can I discover more

How can I discover more information about the pow camp in Scotland Neck?

There are two books I would recommend to you for information about World War II POWS in North Carolina.

I hope this helps. Please feel free to respond to this post with any more questions or comments.