The American Missionary Association (AMA) was a Christian educational organization founded on 3 Sept. 1846 in Albany, N.Y., through the antislavery coalition of the Union Missionary Society, the Committee for West Indian Missions, and the Western Evangelical Missionary Society. The organization was born amid the protests of Christian abolitionists critical of the refusal of American churches and benevolent societies to adopt and act on abolitionist principles. The AMA's founders maintained that enslavement and slaveholding was a personal sin no matter what the reasons or motives underlying it and that all black people were members of the "equal brotherhood in the family of Christ." This belief distinguished them from many other abolitionists, including William Lloyd Garrison, who was outspokenly antichurch and who believed in using violence if necessary to achieve freedom for enslaved black people.

The AMA began its activities in North Carolina in 1863, when schools were established in black churches on Roanoke Island and in Federally occupied cities such as New Bern, Beaufort, Morehead City, Washington, and Plymouth. After the Civil War, AMA schools were started in several other towns, including Raleigh, Fayetteville, Wilson, Wilmington, McLeansville, Charlotte, Murfreesboro, Franklinton, Ahoskie, and Winston (now Winston-Salem). Initially, the AMA's focus was on elementary education; in North Carolina and elsewhere in the South, it had been illegal to teach an enslaved person to read, so the level of illiteracy among black people was high. The AMA's concept of educational equality eventually included full access for all black people in the areas of elementary education, industrial and technical training, higher education for teachers, professional training, and liberal arts education at the collegiate level for those capable and interested. The AMA firmly supported the public school system, and its long range objective was to help the public understand its responsibility in educating all of its citizens, both black and white. 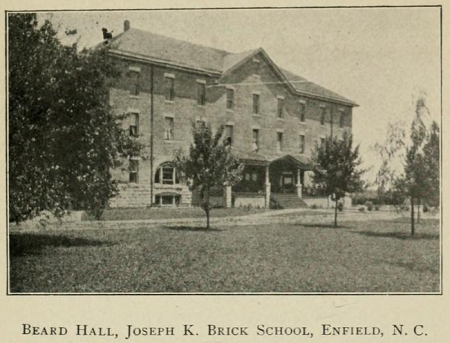 The year 1865 marked the beginning of the end of the AMA's nondenominational status and the start of its cooperation with the Freedmen's Bureau. That year the AMA received $250,000 from the National Council of Congregational Churches, which previously had adopted the AMA as its agent in matters related to freedmen's welfare and the channel for much of its antislavery effort. In 1865 the AMA also became the first organization to employ black teachers in North Carolina. Most were North Carolina natives, and some had been enslaved before Emancipation. White teachers employed by the AMA to educate black people were often treated with disdain by local communities.

Many citizens at first ignored white teachers from the North who were looking for room and board or seeking to buy land. In some North Carolina counties, the Ku Klux Klan actively disrupted the efforts of AMA teachers. A short-lived whites-only school was established by the AMA in Beaufort in 1867; it was subsequently closed because of the backlash in the black community.

During its cooperation with the Freedman's Bureau, the AMA also founded another Freedman's school in Smithfield, NC. The Smithfield Freedmen's Schoolhouse was built in 1868-1869. As of 2022, it is owned and being renovated by the Historic Smithfield Foundation. It is the only known freedmen's schoolhouse that remains in North Carolina.

With many of its North Carolina schools being incorporated into the state public school system during the late nineteenth century, the AMA turned its attention to a special institution at Bricks, a community in Edgecombe County near the boundaries of Halifax and Nash Counties. On land deeded to the AMA by Julia Elma Brewster Brick, the Joseph Keasley Brick Agricultural, Industrial, and Normal School was established for blacks in 1895. From a simple rural elementary institution, the school grew into a high school, and, in 1926, a junior college. Until it closed in 1933, the school specialized in training in agriculture, farm industries, and homemaking, maintaining a great influence among local farmers and providing a valuable educational service by training teachers.

A. Knighton Stanley, The Children Is Crying: Congregationalism among Black People (1979).