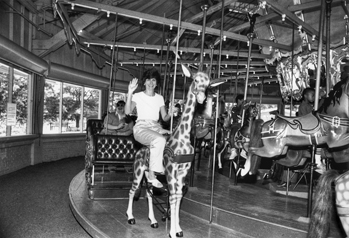 Amusement parks began to appear in North Carolina in the late 1800s and grew in popularity during the first half of the twentieth century. Some parks started out as swimming holes and picnic groves, with rides and other attractions later added to entice larger crowds. So-called trolley parks, usually located at the end of a streetcar line, were popular and provided additional revenues during the weekends and holidays when the streetcar business was otherwise slow. Utility companies, which often owned both the trolley lines and trolley parks, benefited by selling power to these "electric parks," which came alive at night with hundreds of lights decorating rides, buildings, and trees. Brookside Park, a trolley park located in Raleigh just north of Oakwood Cemetery and near the end of a streetcar line, opened for business in 1892 and became one of the state's earliest amusement parks. Attractions included a dance pavilion and a lake with rental boats. Bloomsbury Park, established in 1912 and located near Lassiter Mill in northwest Raleigh, was the capital city's most ambitious effort to provide outdoor amusements, boasting a carousel, a roller coaster, a penny arcade, refreshment stands, a lake for boating, and a shaded picnic area.

Asheville, Burlington, Raleigh, Rocky Mount, and other North Carolina towns had city parks with swimming pools, dance pavilions, and other attractions. Like Raleigh's Pullen Park, some operated a few rides. A Gustave A. Dentzel carousel, moved to Pullen Park from Bloomsbury Park in 1921, continues to be Pullen's most popular attraction and one of only 14 such carousels in the United States. (North Carolina's other Dentzel carousel is in a city park in Burlington.) Although small in comparison to Coney Island and Atlantic City, North Carolina's seaside resorts with amusement attractions also became popular during the early to mid-1900s. Principal seaside amusement parks of this era included those at Carolina Beach, Wrightsville Beach, and Atlantic Beach. 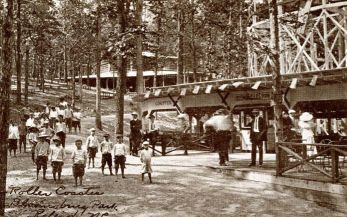 As North Carolina's economy and population grew during the second half of the twentieth century and family motor travel became commonplace, the entertainment and tourism industry burgeoned, resulting in the establishment of many new amusement parks and other attractions throughout the state. Located near natural attractions in the mountains such as Chimney Rock, Grandfather Mountain, and Mount Mitchell, and along the North Carolina coast, privately developed carnival parks with rides, water parks, miniature golf courses, and expansive electronic arcades grew in number and popularity. Increasingly high-budget theme parks also were developed, some with investors outside the state. In western North Carolina, Ghost Town in the Sky (Maggie Valley), Gold City Amusement Park (Franklin), Santa's Land (Cherokee), and Tweetsie Railroad (Blowing Rock) have attracted generations of North Carolinians and tourists from beyond the state.

North Carolina's largest amusement park is Paramount's Carowinds, a 105-acre theme and water park that straddles the North Carolina-South Carolina line near Charlotte. Initially consisting of seven themed areas that included references and reflections of Carolina history, culture, and heritage, it was inspired by Charlotte businessman E. Pat Hall's 1956 trip to Disneyland and his desire to see his home state have such a park. Carowinds opened in 1973, attracting 1.23 million visitors in its first season. In addition to amusement park features, Carowinds from the beginning included campgrounds and picnic and recreational areas.

In January 1975 Carowinds was bought for $16 million by Family Leisure Centers, a new company formed by Ohio-based Taft Broadcasting Company, which already owned Kings Island in Cincinnati and was building Kings Dominion near Richmond, Va. More than $108 million was invested in Carowinds from 1973 to 2003, including $60 million since Paramount purchased the facility in 1992. The largest investment for a new product in the history of the park occurred in 1999, when the park spent more than $10 million to introduce Top Gun: The Jet Coaster, themed after the 1986 hit Paramount movie. It remains the most popular attraction among Carowinds's numerous roller coasters.

William F. Mangels, The Outdoor Amusement Industry: From the Earliest Times to the Present (1952).

The carousel at Pullen Park in Raleigh, 1983. Courtesy of North Carolina Office of Archives and History, Raleigh.