On February 7, 1862, a hundred vessel Union flotilla steamed down Croatan Sound to land an amphibious force on Roanoke Island after destroying a small Confederate fleet in Albemarle and Pamlico sounds. Gen. Ambrose E. Burnside led 15,000 U.S. Army troops while Flag Officer Louis M. Goldsborough commanded the naval contingent. By capturing the island, the Federals would have a base from which to attack Confederates in North Carolina from the sea. About 3,000 Confederate soldiers under Col. Henry M. Shaw opposed the landing, and Flag Officer William F. Lynch’s three-gun battery and seven gunboats supported them. Three forts stood on the northwestern part of the twelve-mile-long island, but were not positioned so they could help. Lynch led his gunboats out against the Federal fleet, but Goldsborough defeated them and landed the Union troops at Ashby’s Harbor. By midnight, the Federals occupied the beach, and at 8:00 a.m. the next morning, they set off in pursuit of the Confederates, who were retreating north. About halfway up the island, Burnside’s men encountered the battery and a force of 1,500 but soon outflanked them. The Confederates retreated once again, then surrendered near the northern tip of Roanoke Island.

Burnside next turned his attention to New Bern. Confederate Gen. Lawrence O'B. Branch, commanding an inadequate number of troops there, decided to defend the city in fortifications located about six miles below it along the Neuse River. Burnside landed his men twelve miles downriver on March 13 and began marching toward New Bern. By then, Branch had redeployed his force closer to the city, and the men braced for the attack, which began the next morning. Although the Confederates held off the Federals for several hours, eventually the center of the defense collapsed, and Branch’s men retreated. Some crossed the Trent River into New Bern and burned the bridge behind them, but Union gunboats shelled them. Realizing his position was untenable, Branch withdrew his men by rail to Kinston. Burnside’s force occupied New Bern the next day, and the city remained in Federal hands until the end of the war. Confederate Gen. George E. Pickett attempted to recapture it in 1864 but failed. Burnside went on to take Beaufort and Fort Macon, for which he was promoted on March 18. 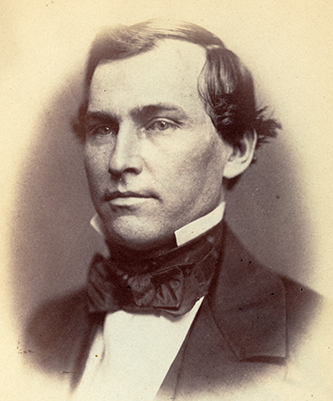 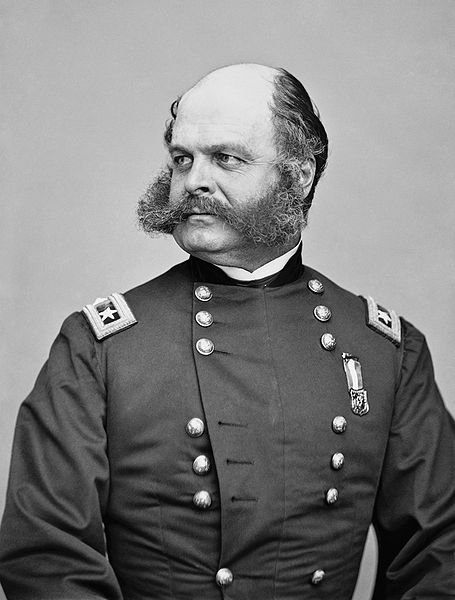 Burnside's Proclamation to the Citizens of North Carolina where he says, "The mission of our joint expedition is not to invade any of your rights, but to assert the authority of the United States, and thus to close with you the desolating war brought upon your State by comparatively a few bad men in your midst." 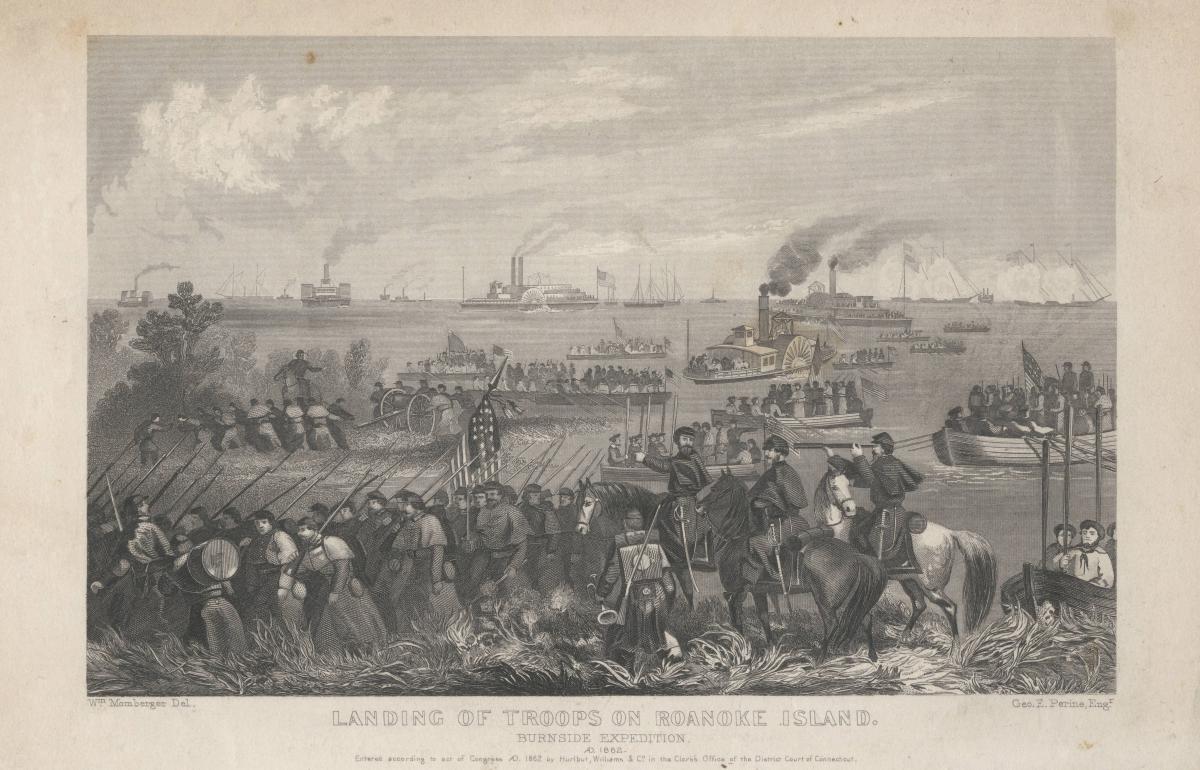 Engraving of the Burnside Expedition landing at Hatteras Inlet 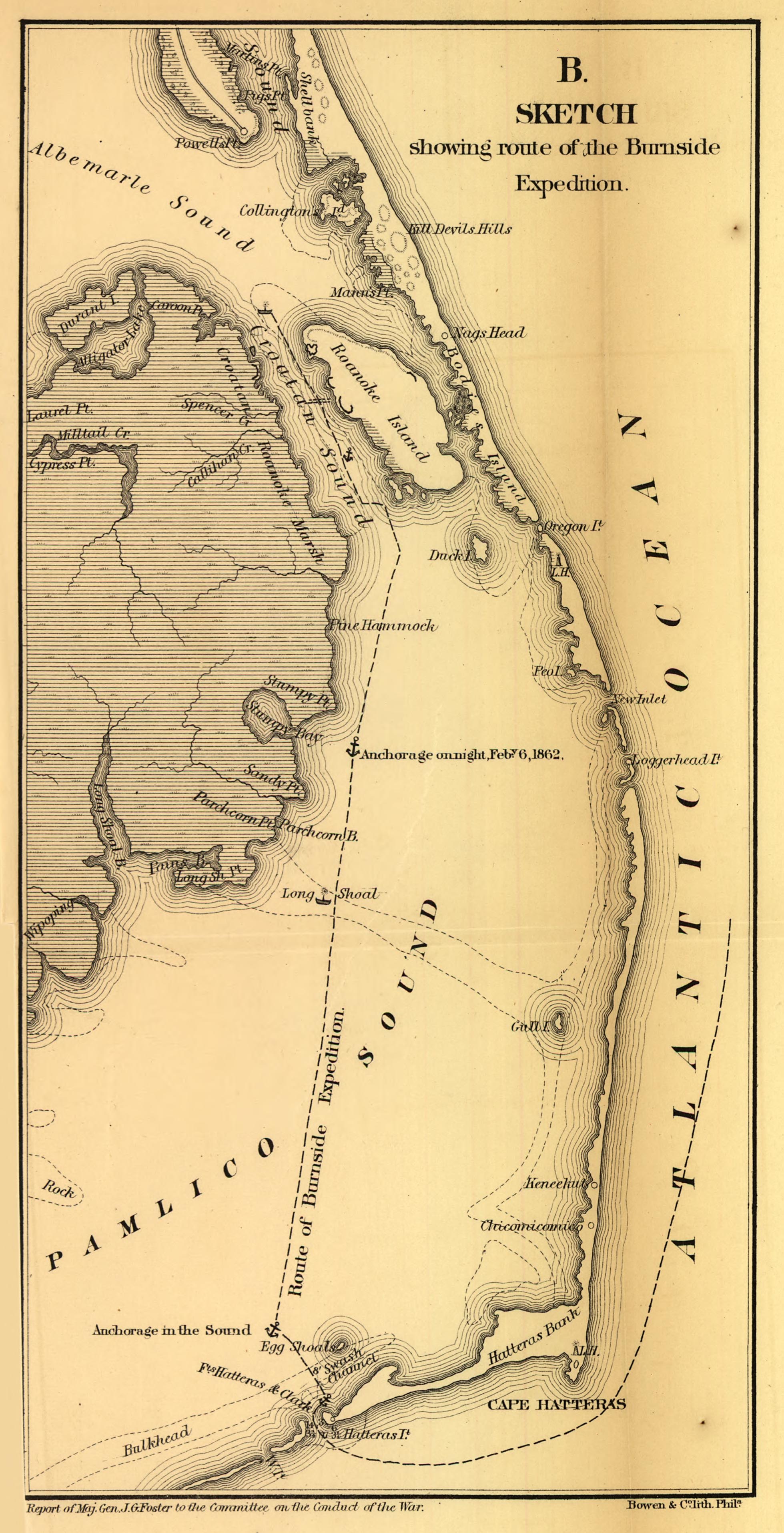 A sketch of the Burnside Expedition's route to Roanoke Island, February 1862.