Terry Sanford, North Carolina’s most progressive governor, was born in Laurinburg, North Carolina, on August 20, 1917. As a young man, Sanford served as a special agent for the FBI and fought as a paratrooper in the Second World War. He then became a lawyer. Sanford worked at the University of North Carolina’s Institute of Government before moving into a political career. He served as a state senator starting in 1953. Sanford also managed W. Kerr Scott’s successful 1954 Senate race. In that contest, he defended the Scott from the underhanded attacks of his opponent, interim Senator Alton Lennon.

Sanford was elected governor in 1960 on a liberal platform. He immediately went to work transforming the state. The governor’s Quality Education Program increased taxes to pay teachers and build schools. It also provided resources for libraries and classrooms. He worked to improve both county schools and colleges. Sanford’s policies led to several new UNC system schools. He also helped create today’s network of community colleges. Governor Sanford was able to secure $100 million in new education funding in his first year alone. He did all of this despite heavy opposition from the state’s conservative legislature.

Sanford also improved the state’s economic future with the Research Triangle Park (RTP). While the Park began under his predecessor Kerr Scott, Sanford secured a $70 million investment for RTP from the federal government. This money helped the Park attract healthcare and technology companies. One year after Sanford left the governor’s office, IBM opened a campus in RTP. This campus made the state millions of dollars that it could use to invest in education and other programs. Sanford’s actions helped transform North Carolina’s economy into its current success.

Sanford’s greatest achievement as governor was fighting both poverty and racism. In a famous 1963 speech, Sanford said, “North Carolina and its people have come to the point of recognizing the urgent need for opening new economic opportunities for Negro [African American] citizens. We also recognize that in doing so we shall be adding new economic growth for everybody.” To help create growth, he started the North Carolina Fund. This fund provided money and workers. Their goal was to help poor whites and African Americans throughout the state. Volunteers, teachers, and activists traveled throughout the state. They helped unemployed people gain skills and jobs. In five years, the program spent more than $16 million from private and federal sources to help low-income North Carolinians. It also influenced the federal Great Society programs that began in 1964.

Sanford’s tenure as governor was only the beginning of his service to North Carolina. He was later elected as a U.S. Senator and became president of Duke University. Sanford also ran for president twice in the 1970s. He continued to help the state until his death in 1998. Sanford was remembered by then-Governor Jim Hunt mainly for his contributions to education. Hunt said, “Terry’s spirit of boundless optimism and commitment to excellence for our children and our public schools have changed us forever.” 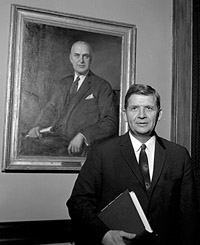 Speech by Governor Terry Sanford on Passage of the Civil Rights Act, July 1964
Original archival video from the State Archives of North Carolina