On August 19, 1956, the first annual Highland Games were held at Grandfather Mountain. Even though the event was the first of its kind in the region it was an instant success: more than 10,000 people turned out to see performances of Scottish songs and dances and to watch athletic events including foot races, wrestling, and the traditional caber toss. The Highland Games have been held annually at Grandfather Mountain since 1956, growing to become the largest event of its kind in the country.

The date chosen for the first games marked the 211th anniversary of the Jacobite Rebellion in Scotland in 1745, when the clans gathered to prepare for a fight for Scottish independence from England. The defeat of the Scots and subsequent laws banning displays of Scottish heritage led many to emigrate, a large number of whom settled in North Carolina.

The first Grandfather Mountain Highland Games were largely the work of two people: Donald MacDonald, a journalist for the Charlotte News, and Agnes MacRae Morton. Both were active in Scottish heritage groups and were eager to promote Scottish culture and traditions in the United States. The first games were based upon the famous Braemar Gathering in Scotland, which MacDonald had attended a few years before, and on a similar festival held in Connecticut. Many of the athletic competitions held at the first games would have been familiar to people at the time, including the high jump, shot put, 60-yard dash, and broad jump. But the highlights of the day were the traditional Scottish music, dancing, and the caber toss. The “Fighting Scots” brass band from Scotland County High School played, and there were bagpipe bands from around the country. The winner of the dance competition was described by the next day’s newspaper as “An Asheville lassie, little red-haired Margaret Fletcher,” while the caber toss was won by a student from Appalachian State Teachers College, who tossed a 200-pound log more than thirty-six feet.

The continued success of the Grandfather Mountain Highland Games has been due in large part to its setting. Agnes MacRae Morton’s father, Hugh MacRae, had developed the resort town of Linville at the foot of Grandfather Mountain in Avery County. The rugged terrain is similar to the landscape of parts of Scotland. Morton volunteered the use of MacRae Meadows for the games, and MacDonald worked to install bleachers and a tent for the participants and spectators. The Morton family has continued to support the games ever since 1956, with Agnes Morton’s son, Hugh MacRae Morton, taking a significant role in the promotion of the Highland Games. The Games regularly attract more than 30,000 visitors a year and have made not just the event but the region synonymous with Scottish heritage. The author of a history of the Scottish Highland Games has written, “When one mentions Grandfather Mountain in Scottish circles around the country, the name is repeated with such ethereal reverence as to sound almost mystical." 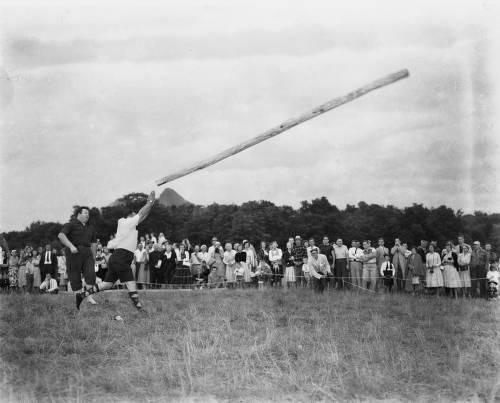