The Influence of Radio

The early days of radio had a profound influence on musicians and listeners in the Northwest Piedmont. Three particularly influential early radio stations in the region were WPAQ out of Mount Airy in Surry County and WSJS and WAAA out of Winston-Salem. 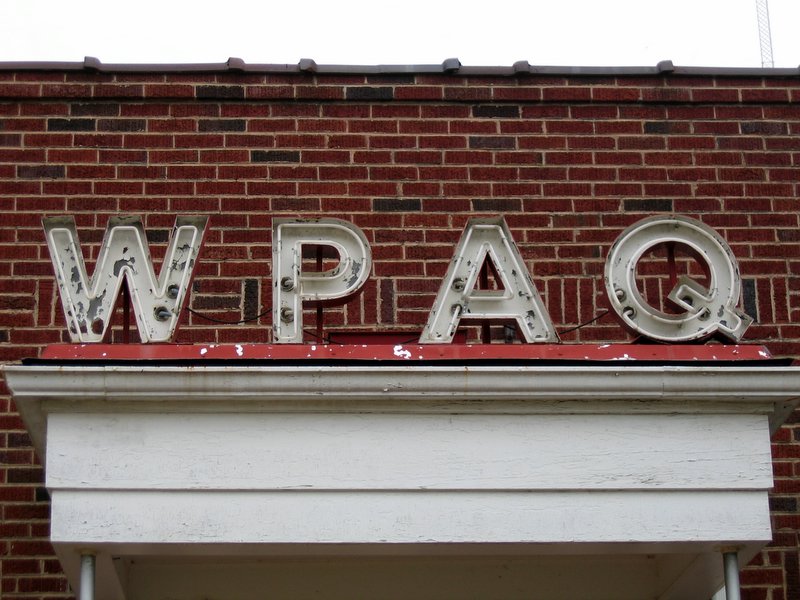 WPAQ broadcast its first show on 740 AM from its studios in Mount Airy on February 2, 1948. Its signal reached listeners in surrounding North Carolina counties, such as Yadkin and Stokes, as well as nearby Virginia counties, such as Carroll and Grayson. In 1954, at 10,000 watts, WPAQ became the most powerful AM station in the Northwest Piedmont.<1 From the station's first day on the air, WPAQ's founder and owner Ralph Epperson was committed to having his station reflect the musical and cultural values of the residents of the station's listening area.2

During the '40s and '50s, as today, WPAQ featured a variety of music styles indigenous to the region, including old-time stringband, bluegrass, and traditional gospel music. Gospel music was commonly heard on air, with live performances by local and touring groups, including African American ensembles such as the Silvertone Harmonizers.3 Live performances by local stringband musicians were particularly popular on the station, as the area was filled with talented old-time stringband musicians and fiddlers' contests and square dances were still plentiful in the region.4

Live broadcasts were common on WPAQ during this era when most radio stations were turning more and more programming over to recorded music. According to music historian, National Public Radio newscaster, and former WPAQ news director Paul Brown, "In the station's early days, as much as half of WPAQ's daily music programming was live, featuring local and professional talent in Studio A and Studio B."5

WPAQ's weekly live radio show, the Merry-Go-Round, began in 1948 and featured local and touring talent. The show, still going strong today, is part of the living history of American radio. According to folklorist Fred C. Fussell, "Over the years a host of regional and national music legends, including Tommy Jarrell, Benton Flippen, The Carter Family, Mac Wiseman, Lester Flatt and Earl Scruggs, and Bill and Charlie Monroe, have gathered before the microphones for the Saturday morning broadcast. The program's popularity and proven devotion to regional music has resulted in WPAQ's Merry-Go-Round's becoming the third-longest-running live radio show in the nation."6

The Round Peak community of northwest Surry County was home to some of the local musicians who occasionally performed live on WPAQ during the early years. Some Round Peak musicians who performed during the '40s and '50s included members of the old-time stringband, the Camp Creek Boys: Fred Cockerham, Ernest East, Paul Sutphin, and Verlen Clifton.7 In the late 60s, the intense, hard-driving, Round Peak-style of old-time stringband music would attract national and international attention to Surry County, and the Camp Creek Boys would become legendary among old-time stringband fans. 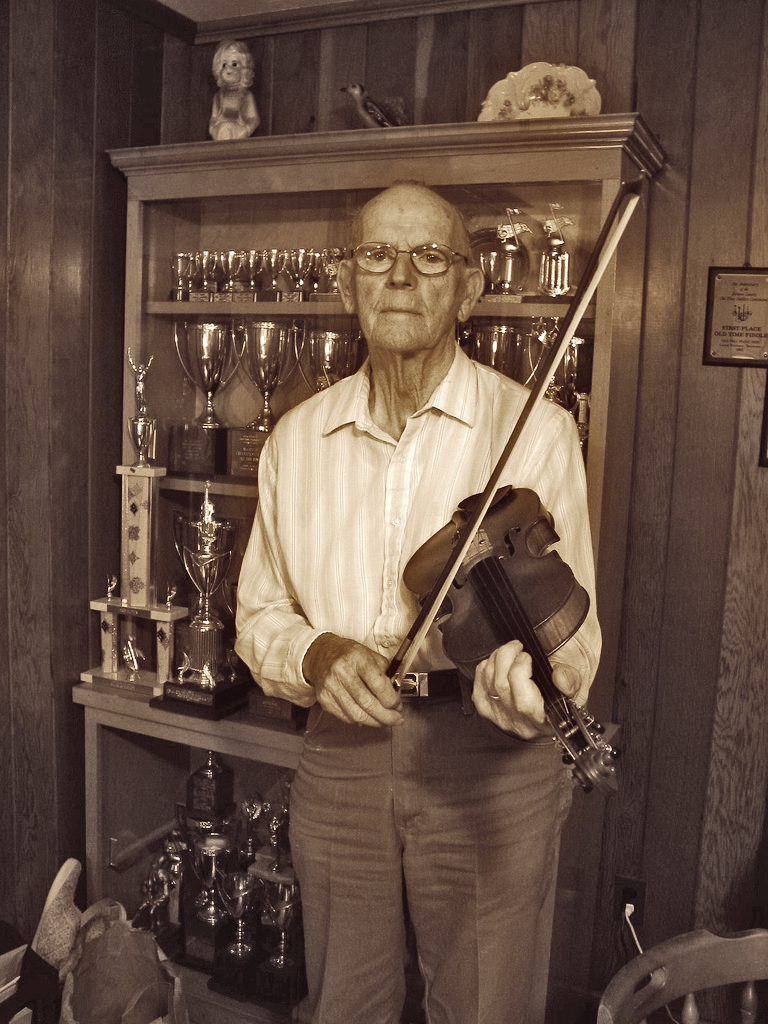 ...Stories told by musicians and others indicate that the Round Peak sound may have been considered, even in 1948, a bit old fashioned...for air on a frequent basis. It was only during the 1980s, when Tommy and Benny Jarrell, Earnest East, Benton Flippen, Kyle Creed and Fred Cockerham had produced recordings with full band accompaniment, that the music of Round Peak was commonly heard on WPAQ's weekday programs.8

This was after Jarrell and others were discovered during the national folk revival of the 1960s and '70s. During this period, folk music enthusiasts traveled to the Blue Ridge region from all over the country and the world in order to meet the local musicians and find the source of the popular folksongs of the day, as well as to learn how to play old-time stringband music from the masters.9

WPAQ's commitment from 1948 forward to keeping the area's indigenous musical culture and performers at the center of its programming has made a lasting impact on the station's listening area. WPAQ has played a significant role in keeping traditional Blue Ridge mountain music alive in and around Surry County and has helped inspire young local musicians to learn to play the music of their parents and grandparents. It is not surprising that the enduring popularity and perpetuation of traditional old-time stringband, bluegrass, and gospel music in the region is often attributed in no small part to WPAQ's ongoing fifty-year presence on the airwaves.

Almost two decades before WPAQ hit the airwaves, the first radio station in the Northwest Piedmont, WSJS out of Winston-Salem, began in 1930. At 600AM on the dial, WSJS is still on-air today, though in a different format from its early days.

Considering the region's religious nature, it is not surprising that WSJS's first day on the air offered religious programming. WSJS began broadcasting on Good Friday of 1930: "A religious program was the first to be broadcast. The Right Reverend Edward Ronthaler, bishop of the Moravian Church, offered the prayer of dedication and the choir of St. Paul's Episcopal Church provided appropriate music."10

Beginning in the '20s, southern old-time stringband or "hillbilly" music, as it was called, was very popular, and barn dance programs sprung up across the country. WSJS was certainly no exception. As did many early radio stations around the south, WSJS featured touring, as well as readily available and inexpensive local entertainment. According to Worth Bacon, an early news broadcaster for WSJS, "Hillbilly bands were favorites in the early days of WSJS. They came by the dozen to the news room and waited their turn on the air. Frequently they went to an adjoining room... and tuned their guitars, banjos or vocal chords, sending forth echoes which were almost deafening to editors and reporters who worked nearby."11

The broadcast schedules of the station's first few months confirm the popularity of string bands. Musicians came from all over the Northwest Piedmont to play on the radio -- groups such as the Mocksville String Band, the Walkertown Merrymakers, the Stokes Mountaineers, the Thomasville Jack Rabbits, the Cooleemee String Band, the Stanleyville String Band, and the Lexington String Band.

WSJS succeeded in this format and attracted a large number of both European and African American listeners. Early country music programming on WSJS was a normal part of many African American families' routines, growing up to the sounds of Grandpa Jones, Red Foley and Roy Acuff.

In the earliest days of radio broadcasting, the airwaves of the Northwest Piedmont were not open to local African American artists and their newly emerging sounds. E. E. Tanner's gospel program on WAIR began in 1937, seven years after WSJS began broadcasting. It was not until the 1940s that the African American gospel ensemble, the Camp Meeting Choir, could be heard on WSJS.12 According to veteran Winston-Salem radio announcer Al Martin, the "Godfather of Gospel," "Back when I started, there was no chance for blacks to get on the radio except Amos and Andy, and they weren't even really black... Because of that, I got my start in radio late. I was thirty-nine when I started in radio."13

Al Martin's first Winston-Salem radio opportunity appeared at WAAA, the first station in North Carolina to be formatted to the interests of the African American community. The station began broadcasting on October 29, 1950 in its studios on the corner of Liberty Street and Third Street "in the heart of a booming black district downtown."14

Popular announcers on WAAA during the station's early years included Larry Williams, Fred "Steady Freddie" Allen, Robert "Bobcat" Roundtree, and Oscar "Daddy-Oh" Alexander, whose legendary "Daddy-Oh on the Patio" show aired from Ray's Roadside Drive-In.15 For half a century, WAAA has reflected the musical tastes and community values of many African Americans in and around Winston-Salem, serving as a source of entertainment, information, and inspiration.