Mustering Out of the Confederate Army

After nearly a week of negotiations, Joseph Johnston surrendered his army to William T. Sherman on April 26, 1865, at Bennett Place. Several days later, Confederates of the Army of the Tennessee, detachments from the Army of Northern Virginia on duty in North Carolina, and other units such as artisans and naval personnel posted in the state were offered their paroles by Union authorities.

At 8:00 on the morning of May 1, Brig. Gen. William Hartsuff, inspector-general of the Union Army of Georgia, opened his paroling office in Greensboro’s Britton House Hotel. The first Confederate to receive a parole was Rear Adm. and Brig. Gen. Raphael Semmes, who had recently been given an army rank as his sailors were transferred to the infantry in April. By the afternoon, so many Confederates had received paroles that Hartsuff was running out of forms. He commissioned a local printer and Confederate veteran, James Albright, to print 15,000 more forms. Albright and his brother completed the work, receiving $125 for their services.

By the end of May 2, paroles had been issued to over 32,000 men. Johnston’s surrender affected the nearly 90,000 Confederates posted east of the Mississippi with the exception of those who surrendered with the Army of Northern Virginia. According to Johnston’s final morning report, 16,000 men were present for duty with the remnants of the Army of Tennessee. In the days prior to the surrender, several thousand men had simply left for home once they determined the war had ended.

Having received their paroles, the Confederate troops performed their final mustering out ceremonies. The majority of the army did so at Greensboro, where they stacked their arms and equipment at the Guilford County Court House. Other detachments, mainly the North Carolina Junior Reserves and elements of the Army of Northern Virginia on detached service, mustered out at or near Bush Hill.

Joseph Johnston’s final speech to his troops asked them to “discharge the obligations of good and peaceful citizens at your homes as well as you have performed the duties of thorough soldiers in the field." Portions of the Confederate Treasury were evidently handed out among the troops. According to Maj. G. W. F. Harper of the 58th North Carolina, "At Greensboro, the regiment was paid in Mexican silver dollars –one dollar and fourteen cents to each officer and enlisted man present.

Having turned in their arms, received their paroles and final pay, the former Confederates returned home. For many of the members of the Army of Tennessee, getting home meant long, arduous journeys to Texas, Louisiana, and Arkansas. Texan Samuel Foster wrote, “After turning in our guns and getting our paroles, we fell relieved. No more picket duty, no more guard duty, no more fighting, no more war. It is all over, and we are going home. Home after an absence of four years from our families and our friends." 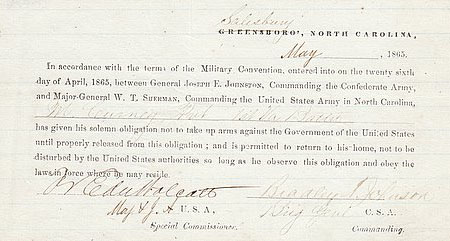 Parole Signed by the Officers and Men in Johnston's Army