The Mystery of the First Americans

In the second half of the twentieth century, archaeologists agreed that those 'first Americans' migrated from Asia across Beringia and into North America between fourteen and twenty thousand years ago. Recently, though, new evidence has come to light that has led some archaeologists to doubt that theory and to suggest new possibilities.

In 1997, a group of prominent archaeologists visited a site at Monte Verde in southern Chile to investigate a startling claim. Remains of an ancient camp had been found there: artifacts made of stone, wood, and bone, part of huts that had been covered with animal hides, and the preserved footprint of a child. The researchers who found them dated them at 12,500 years old -- older than the Clovis cultures whose remains have been found in the western United States. Some remains appeared even older than that. What's more, the artifacts suggested a way of life very different from that of the Clovis culture.

The findings raised serious questions about the standard view of humanity's arrival in the Americas. If the dating of these artifacts was correct, how early must humans have crossed Beringia to have migrated all the way to southern South America by 12,500 BP (before present)? Geologists believe that the ice-free corridor through central North America did not open up until 13,000 years ago. Could these Monte Verde people have arrived via a separate, earlier migration? Might they have reached South America by a different route altogether? If so, what might that route have been?

The blue-ribbon panel examined the evidence and reached a unanimous verdict: the site was, indeed, 12,500 years old. Some archaeologists disagreed with their findings, but the search for remains of other pre-Clovis sites gained sudden legitimacy. Evidence has since been found in Pennsylvania, Virginia, and Mexico confirming that humans were present in the Americas before the Clovis people arrived some 11,000 years ago.

In July, 1996, two boaters stumbled across a skull on the banks of the Columbia River in Kennewick, Washington. An archaeologist determined it to be the skull of a man who lived 9,200 years ago and died at the age of 45 by a projectile wound to the head. More interestingly, the skull of Kennewick Man, as researchers called him, didn't have the features of modern American Indians, or of Paleoindians whose remains have been found in the Americas. He seemed to have European features -- a shocking finding, given existing theories about the origins of the first Americans.

Research on Kennewick Man's remains -- including DNA testing -- was interrupted almost immediately. Northwestern Indian tribes claimed the remains as belonging to one of their ancestors, and federal officials impounded the remains until a legal settlement was reached. Not until in 2004, after years of legal battles, did a federal judge rule that research could proceed.

It now appears that Kennewick Man resembled not Europeans but South Asians or the Ainu people of Japan (who themselves have European features). But the long controversy raised interest in the possibility that the first Americans had more than one origin.

Most archaeologists still believe that most, if not all, of the first Americans arrived in a relatively short time period. But the likelihood of one large-scale migration doesn't preclude the possibility of other smaller migrations, and there is still debate about how and when that large-scale migration took place. Here are some of the problems and theories that archaeologists continue to debate.

About 11,000 years ago, the megafauna of North America died out. Their extinction was sudden in geological terms -- they seem to have disappeared in as little as 500 years' time. Humans may have hunted them to extinction, but some archaeologists believe that small numbers of people with primitive stone weapons simply could not have killed off all the megafauna of two continents in so short a time. Another theory is that humans and their dogs brought diseases that infected the continents' megafauna -- a disturbing foreshadowing of the Columbian Exchange. Both theories point to a massive human migration to the Americas about 11,000 years ago. But other research suggests that a swiftly changing climate played a role, and that humans may not be entirely to blame.

DNA testing has shown that modern American Indians are descended from people who lived in East Asia, specifically in Siberia, thousands of years ago. Just how long ago is debated -- some evidence suggests that they left Siberia 30,000 years ago -- but it seems clear that most, if not all, of the first Americans came from Asia.

Archaelogists have supposed an ice-free corridor east of the Rocky Mountains through which the Clovis people migrated to the western United States, but geologic evidence suggests that corridor may not have existed -- at least not until 11,000 years ago.

It may be that instead of moving through the interior of the continent, the first Americans migrated down the west coast of the Americas, which would have been free of ice much earlier than the interior. They may have done so as early as 14,000 years ago, giving them time to reach Chile by 12,500 years ago. Some archaelogists have suggested that these people may even have used boats to skirt the coastline. Human remains have been found in a part of California that was an island in the Pleistocene, suggesting that someone must have traveled there by sea.

This theory suggests a very different way of life for the first Americans -- instead of hunting megafauna, they would have relied on marine mammals for food. It also raises the question of where the Clovis people came from, how they reached central North America, and how they were related culturally to these coastal inhabitants.

A few researchers, finding similarities between the skulls of ancient humans in the Americas and in Europe, have argued that some early Americans arrived from southern Europe, moving up the coast of Europe, across Greenland, and into North America, perhaps by boat. But (as mentioned above) the Ainu people of Japan are European in appearance, and so similarities between early Americans and Europeans don't rule out an Asian migration. Brazilian archaeologists have also found remains of humans in South America with features typically found among Africans or aboriginal Australians.

Comparisons of the features of early humans is complicated, though, by the fact that skulls older than about 8,000 years are more diverse in appearance than modern skulls. Some scientists argue that it is a mistake to use similarities and differences from this time period to trace migration patterns.

A Continuing Search for Answers

The question of where the first Americans came from, seemingly settled for decades, has again become one of the most interesting questions in archaeology. There seems to be no consensus on the horizon, and it will likely take decades of work by researchers in many fields before the matter is settled -- at least for another fifty years.

This map of Chile shows the Monte Verde site outlined by a red circle. 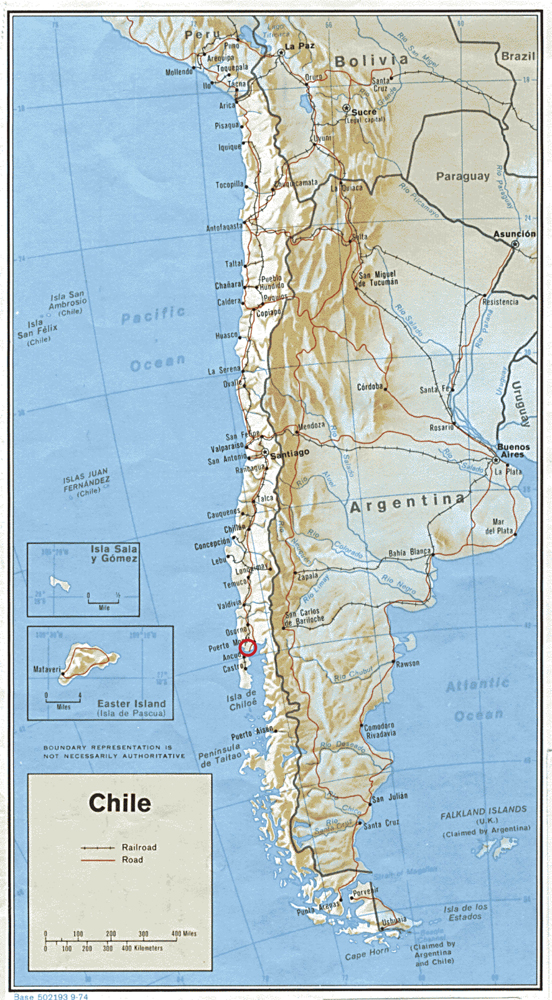 Close-up images of some of Kennewick Man’s bones. 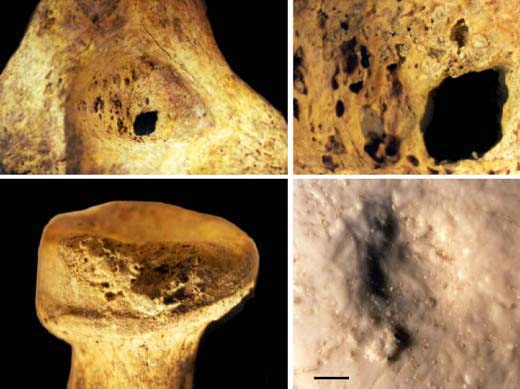