In 1867 and 1868, Congress passed four “Reconstruction Acts” that outlined what former Confederate states must do to be readmitted to the Union. Congress was controlled by Republicans, many of whom wanted to punish the South for secession. President Andrew Johnson, however, wanted to bring southern states back into the Union as quickly as possible. Johnson also believed that the terms of Reconstruction, as passed in this act, denied American citizens their right to an elected government. Johnson vetoed each of the Reconstruction Acts, but the Republicans had a two-thirds majority in both houses and were able to override Johnson’s vetoes.

The acts created five military districts in the seceded states (excepting Tennessee, which had already been readmitted). They also required former Confederate states to submit new constitutions to Congress for approval, to extend voting rights to all men, and to ratify the Fourteenth Amendment.

The First Reconstruction Act, shown here, was passed March 2, 1867. It established military rule in the former Confederate states until they were formally readmitted to the Union.

WHEREAS no legal State governments or adequate protection for life or property now exists in the rebel States of Virginia, North Carolina, South Carolina, Georgia, Mississippi, Alabama, Louisiana, Florida, Texas, and Arkansas; and whereas it is necessary that peace and good order should be enforced in said States until loyal and republican State governments can be legally established: Therefore,

Be it enacted... That said rebel States shall be divided into military districts and made subject to the military authority of the United States as hereinafter prescribed, and for that purpose Virginia shall constitute the first district; North Carolina and South Carolina the second district; Georgia, Alabama, and Florida the third district; Mississippi and Arkansas the fourth district; and Louisiana and Texas the fifth district.

SECTION 2. And be it further enacted, That it shall be the duty of the President to assign to the command of each of said districts an officer of the army, not below the rank of brigadier-general, and to detail a sufficient military force to enable such officer to perform his duties and enforce his authority within the district to which he is assigned.

SECTION 3. And be it further enacted, That it shall be the duty of each officer assigned as aforesaid, to protect all persons in their rights of person and property, to suppress insurrection, disorder, and violence, and to punish, or cause to be punished, all disturbers of the public peace and criminals; and to this end he may allow local civil tribunals to take jurisdiction of and to try offenders, or, when in his judgment it may be necessary for the trial of offenders, he shall have power to organize military commissions or tribunals for that purpose, and all interference under color of State authority with the exercise of military authority under this act, shall be null and void.

SECTION 4. And be it further enacted, That all persons put under military arrest by virtue of this act shall be tried without unnecessary delay, and no cruel or unusual punishment shall be inflicted, and no sentence of any military commission or tribunal hereby authorized, affecting the life or liberty of any person, shall be executed until it is approved by the officer in command of the district, and the laws and regulations for the government of the army shall not be affected by this act, except in so far as they conflict with its provisions: Provided, That no sentence of death under the provisions of this act shall be carried into effect without the approval of the President.

SECTION 5. And be it further enacted, That when the people of any one of said rebel States shall have formed a constitution of government in conformity with the Constitution of the United States in all respects, framed by a convention of delegates elected by the male citizens of said State, twenty-one years old and upward, of whatever race, color, or previous condition, who have been resident in said State for one year previous to the day of such election, except such as may be disfranchised for participation in the rebellion or for felony at common law, and when such constitution shall provide that the elective franchise shall be enjoyed by all persons as have the qualifications herein stated for electors of delegates, and when such constitution shall be ratified by a majority of the persons voting on the question of ratification who are qualified as electors for delegates, and when such constitution shall have been submitted to Congress for examination and approval, and Congress shall have approved the same, and when said State, by a vote of its legislature elected under said constitution, shall have adopted the amendment to the Constitution of the United States, proposed by the Thirty-ninth Congress, and known as article fourteenThe Fourteenth Amendment, which gave full rights of citizenship to African Americans and their decedents. and when said article shall have become a part of the Constitution of the United States said State shall be declared entitled to representation in Congress, and senators and representatives shall be admitted therefrom on their taking the oath prescribed by law, and then and thereafter the preceding sections of this act shall be inoperative in said StateThe former Confederate states would cease to be subject to military rule only when they complied with this act.: Provided, That no person excluded from the privilege of holding office by said proposed amendmentThe Fourteenth Amendment banned anyone who had been in a position of leadership in the Confederacy (either government or military) from holding office after the Civil War, as well as those who had left their position in the United States government to support the Confederacy. to the Constitution of the United States, shall be eligible to election as a member of the convention to frame a constitution for any of said rebel States, nor shall any person vote for members of such convention.

SECTION 6. And be it further enacted, That, until the people of said rebel States shall be by law admitted to representation in the Congress of the United States, any civil governments which may exist there in shall be deemed provisional only Under this act, if a state did not pass a new constitution nor ratified the fourteenth amendment, then whatever government the citizens elected was temporary and the state remained under the jurisdiction of Congress. Until the state wrote a constitution that passed the inspection of Congress, then Congress could veto or modify any state law., and in all respects subject to the paramount authority of the United States at any time to abolish, modify, control, or supersede the same; and in all elections to any office under such provisional governments all persons shall be entitled to vote, and none others, who are entitled to vote, under the provisions of the fifth section of this act; and no persons shall be eligible to any office under any such provisional government who would be disqualified from holding office under the provisions of the third article of said constitutional amendment. 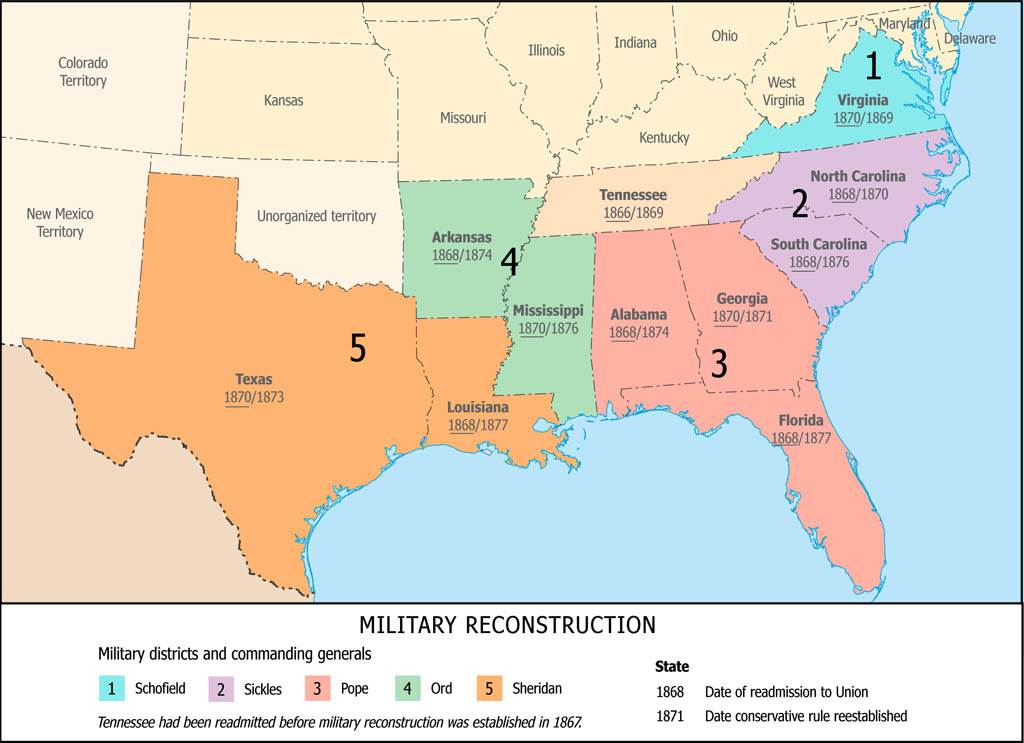