A steamboat is propelled — not surprisingly — by steam, but that may seem impossible if your only experience with steam is watching it rise off a cup of cocoa. In a steamboat’s engine, wood or other fuel is burned to boil water, and the steam from the boiling water is forced through a small space to increase the speed at which it escapes (like releasing the valve on a pressure-cooker). The steam is then channeled into a closed cylinder, where it pushes a piston that turns a paddlewheel. The wheel’s paddles push against the water to propel the ship forward.

Inventors in Europe and America had been experimenting with steam-powered boats since the 1690s, but it was not until 1807 that the first commercially viable steamboat was introduced into the United States: the North River Steamboat1, built by Robert Fulton, which successfully made the trip up New York’s Hudson River from New York City to Albany in thirty-two hours.

Not long after, the first steamboats appeared on North Carolina’s rivers. The Sea Horse of Perth Amboy, New Jersey, was apparently first, steaming up the Roanoke River in 1818. That same year, the first steamboats were built in North Carolina. James Seawell built the Henrietta in 1817–1818 on his plantation near Fayetteville, and it began regular service on the Cape Fear River in October 1818. The Prometheus launched the same year, and when President James Monroe visited Wilmington in 1819, the Prometheus carried him to Smithville. As many as 100 different steamboats traveled North Carolina’s rivers between 1818 and 1861.2 Steamboats also worked the sounds and, by the 1830s, the Dismal Swamp Canal.

Because North Carolina’s rivers are not very deep, steamboats had to be built so that they could travel in shallow water. Fayetteville, Wilmington, and Washington all developed important shipbuilding industries that flourished until the Civil War. 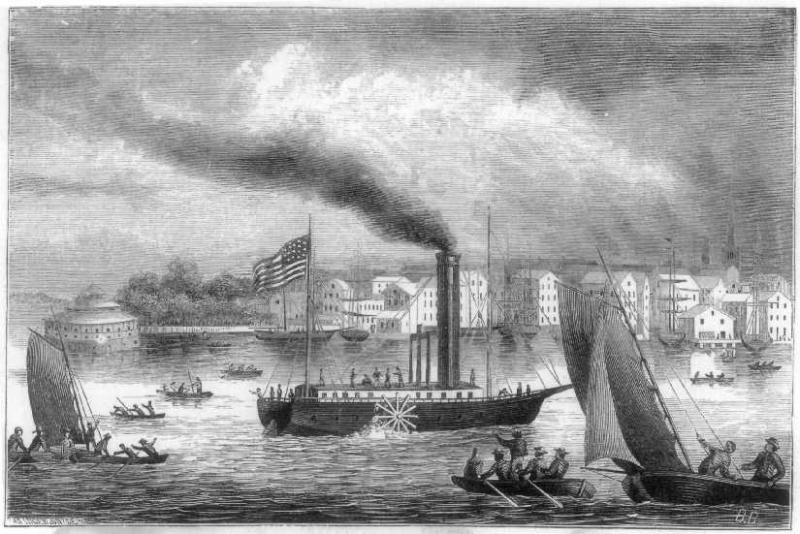 Robert Fulton's North River Steamboat, first launched in 1807. (From James Dabney McCabe, Great Fortunes, and How They Were Made (Philadelphia: George Maclean, 1871).