Transportation in northeastern North Carolina was difficult in the eighteenth century, and residents of the Albemarle region had no easy way to get their produce to northern or European markets. Roads north into Virginia were primitive and required travel through swampy land. Travel by water meant heading down one of the region's rivers into the Albemarle Sound, past Roanoke Island into Pamlico Sound and from there to one of the inlets through the Outer Banks and out into the Atlantic -- a long, dangerous, and expensive trip.

In 1786, commissioners from Virginia and North Carolina met to study the possibility of a canal that would join Albemarle Sound to Chesapeake Bay. They agreed that their states should cooperate to build the canal, and that citizens of either state should have access to the rivers of the other. (The idea that North Carolinians should be able to travel on Virginia's rivers, and vice-versa, seems obvious now, but before the U.S. Constitution took effect in 1788, "citizens" of each state didn't necessarily have full rights in other states!) Four years later, the legislatures of the two states established the Dismal Swamp Canal Company, which would be responsible for building the canal. George Washington, who owned land in the region and hoped to develop it, agreed that the project was feasible and bought $500 in the company's stock, which gave the project credibility.

The plan was to connect the Pasquotank River in North Carolina, which flowed into the Albemarle Sound, with the Elizabeth River in Virginia, which empties into the Chesapeake Bay at Hampton Roads near Norfolk and Portsmouth. A second canal would connect to Lake Drummond, so that water from the lake could be used to fill the canals during dry weather. People who owned land near the canal, meanwhile, could dig ditches into the main canal to drain the land and make farming possible. At 32 feet wide and 8 feet deep, the canal would carry only flatboats -- shallow boats or barges that were little more than rafts for carrying cargo on rivers -- but that would be enough to let the residents of northeastern North Carolinia get their produce and lumber to market. Tolls would pay for maintenance of the canal, as well as of a road running alongside it.

A causeway road -- which today is U.S. Route 17 -- opened in 1790, and construction began on the canal in 1793. The company hoped to finish the canal within ten years, but by 1796 they had run out of money with only part of the canal completed at either end. The company built a road to connect the two portions of the canal, and so for several years, goods were carried by barge partway north or south, then transferred to wagons in the middle and back onto barges for the rest of the trip by water. The full canal opened to traffic in 1805. But it carried mainly logs, shingles, and other wood products from the swamp's forests -- not the great regional trade route originally envisioned by farmers and merchants.

In 1808, Secretary of the Treasury Albert Gallatin conceived the idea of an inland waterway from Massachusetts to Georgia that would allow protected north-south transportation and avoid the need to travel on the open ocean. The waterway would consist of rivers (many of which would have to be deepened or widened), bays, inlets, and canals. His plan didn't find much support until the British blockaded the U.S. coastline during the War of 1812. Most people and politicians at that time had been opposed to the national government building roads, but the difficulty of transportation during the war made it a matter of national defense. With funding from Congress, a feeder canal was built connecting the Dismal Swamp to the Northwest River and Currituck Sound. But it would be more than a hundred years before Gallatin's dream of a full intracoastal waterway would be realized.

As use of the canal grew, it had to be deepened and widened to accommodate boats that could navigate the Albemarle and Pamlico Sounds. With more money from the federal government, the entire canal was rebuilt. Over time, more locks were added -- bringing the number from two to five -- and new stone locks replaced the old wooden ones. By 1828, the Dismal Swamp Canal averaged 40 feet wide and could accommodate larger boats. Even so, passage was slow. The stone locks frequently broke, and boats might have to wait for days while the locks were repaired. In 1859, the Albemarle and Chesapeake Canal opened, and this new route -- which provided faster and more reliable transportation for larger vessels -- took away most of the Dismal Swamp Canal's traffic.

In the 1890s, the Dismal Swamp canal was rebuilt again, this time with only two locks, and for a time it again carried commercial cargo. But in 1913 the federal government bought the Albemarle and Chesapeake Canal as part of the new toll-free Intracoastal Waterway. The Dismal Swamp Canal couldn't compete, and in 1929, it too was purchased by the federal government and added to the Intracoastal Waterway. Today, the Atlantic Intracoastal Waterway -- made up of rivers, inland bays, inlets, and canals maintained by the U.S. Army Corps of Engineers -- provides a protected inland channel for recreational boaters and commercial shippers from Norfolk, Virginia, all the way to Miami, Florida. 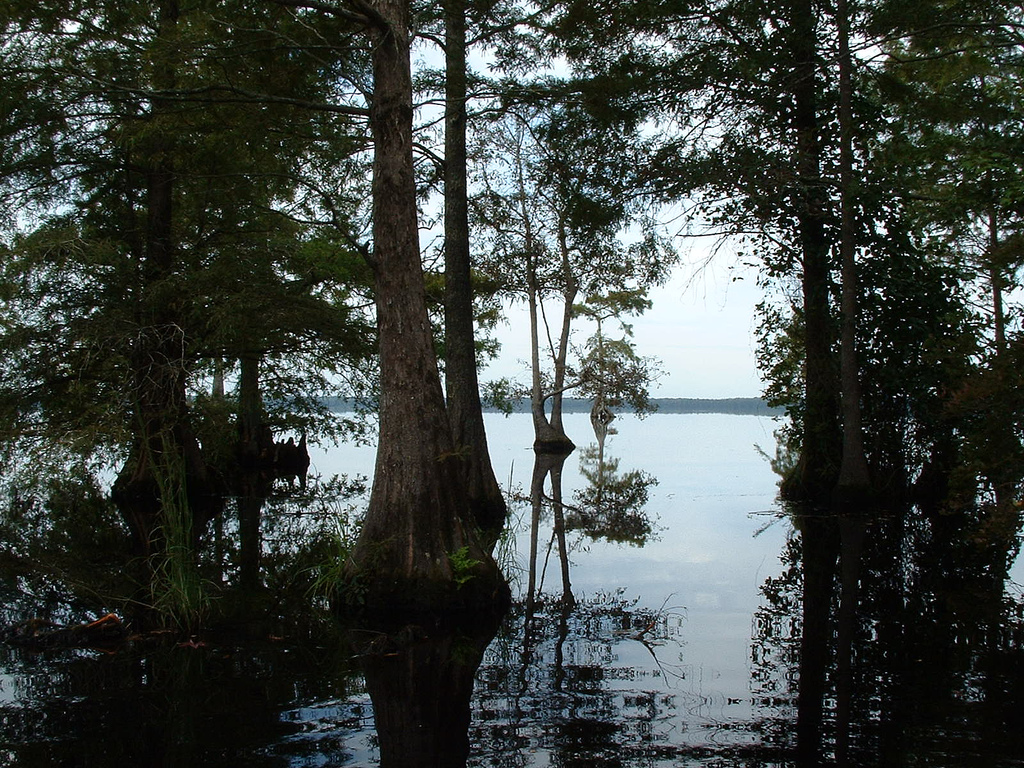 The wetlands of northeastern North Carolina made transportation difficult. 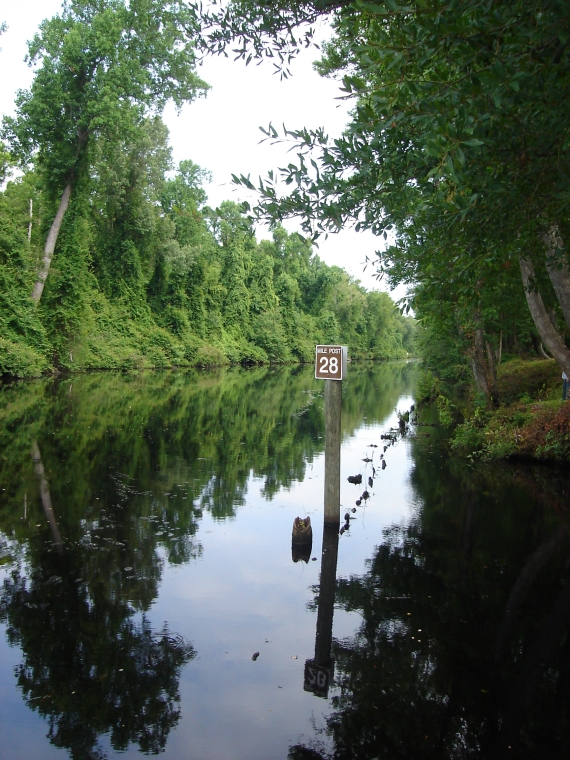 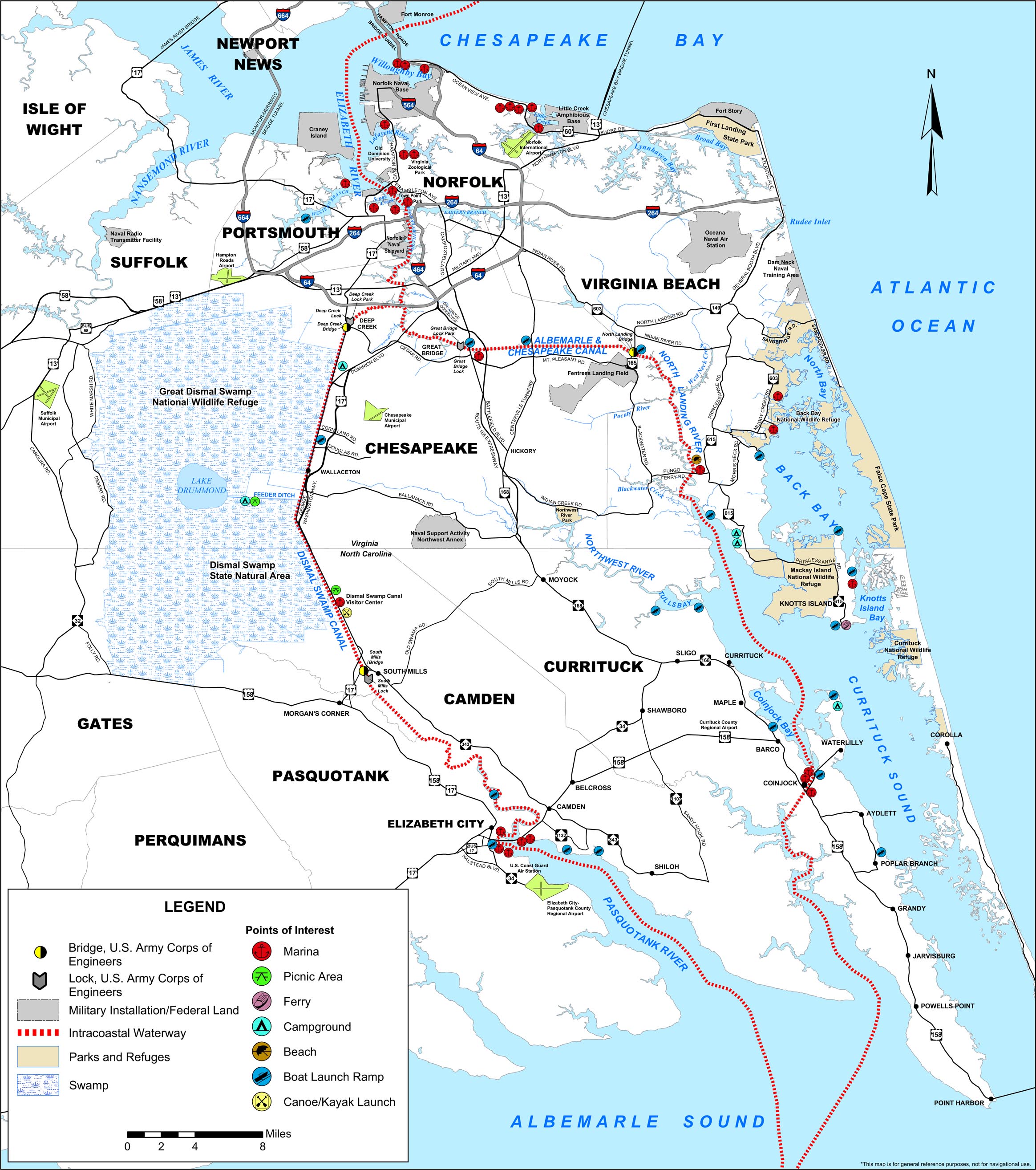 Map of the Atlantic Intracoastal Waterway 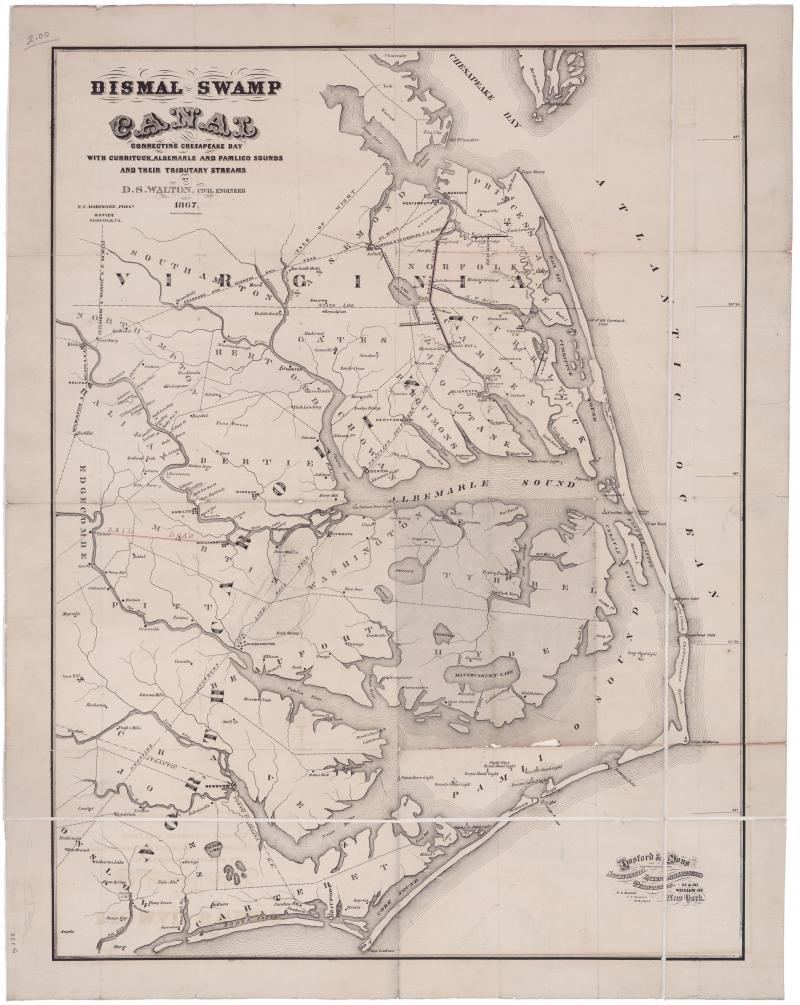 This map shows the Dismal Swamp Canal and its feeder canals in 1867.