In early February, 1971, downtown Wilmington, N.C. was a war zone. Shots rang through the streets, traffic was blocked, and citizens were barricaded in a church. Although it took only a couple of days to restore peace and order, the events of those few days and nights brought worldwide attention to North Carolina and would resonate for decades to come.

In the late 1960s and early 1970s, many Black people were frustrated by the slow pace of school desegregation and other Civil Rights reforms promised by federal legislation and court decisions. Many young people, rejecting the commitment of the Civil Rights pioneers of the 1950s to non-violent tactics, looked for new ways to make themselves heard. There were prominent cases of arson against white-owned businesses in Charlotte and in Oxford, N.C., and many North Carolina cities erupted in violence after the assassination of Martin Luther King, Jr. in 1968.

The largest demonstration following the assassination of King took place in the historic port city of Wilmington. Race relations there had worsened following the desegregation of the city's high schools at the beginning of the 1969-1970 school year. There were frequent clashes between white and African American students resulting in a number of arrests and expulsions. The hostilities reached a boiling point in late January 1971 when Wilmington's African American students announced a boycott of the city's schools. Ben Chavis, an experienced activist from Oxford, N.C., was called to Wilmington to organize the boycott.

Shortly after Chavis's arrival, two downtown businesses were burned, and there was evidence of other arson attempts. African American activists were blamed for the incidents. Members of the Ku Klux Klan and a white supremacist group called The Rights of White People began to patrol downtown Wilmington armed and openly hostile to the boycotting students and their leaders. On the night of February 6, 1971, several fires were set, and a small downtown grocery store was firebombed. When firemen reported to the scene, they were shot at by snipers on the roof of the Gregory Congregational Church, in which Chavis and a number of students were barricaded. Two people were killed and several were injured during the battle that raged that night and into the next day. Finally, on February 8, National Guardsmen forced their way into the church only to find it empty.

Based on the testimony of two African American men who claimed to have been in the church the night of February 6, ten people -- one Black man, eight Black male high school students, and one white female social worker -- were arrested, tried, and convicted on charges of arson and conspiracy to fire upon firemen and police officers. The Black members of the Wilmington Ten were sentenced to between 28 and 34 years in prison while the white woman was sentenced to 15 years in prison. The "Wilmington Ten" were sentenced to a combined 232 years in prison for a fire where no one had been hurt.

In the years following the violence in Wilmington, the case became known around the world. The Wilmington Ten were perceived to be political prisoners by individuals and groups who believed that they were prosecuted not for the actions of February 6, 1971 -- about which there were still conflicting reports -- but for their beliefs. Amnesty International identified the Wilmington Ten as "prisoners of conscience," another term for political prisoners, who "were not arrested for the crimes for which they were charged, but because of their political work." Powerful individuals petitioned the president to "speak out for the human rights of the Wilmington Ten as you have for those you felt were prosecuted in other lands." Soviet Leaders referenced the Wilmington Ten an example of American violations of human rights. National and international criticism of the case against the Wilmington Ten was an embarrassment for both the North Carolina and federal governments. As the administration of President Jimmy Carter accused the Soviet Union of human rights abuses, it was especially sensitive to charges of mistreatment of American citizens.

In 1980, a federal appeals court overturned the conviction due to prosecutorial misconduct. During the investigation and trial, an Assistant District Attorney coached and bribed witnesses in addition to altering the written statement of the prosecution's primary witness. Three of the prosecution's main witnesses recanted, or took back, their statements, saying that they had lied in exchange for legal leniency and in one case a minibike. Additionally, the prosecution withheld exculpatory evidence -- evidence that would have supported the innocence of the Wilmington Ten.

In 2012, Governor Beverly Purdue pardoned the Wilmington Ten, stating "These convictions were tainted by naked racism and represent an ugly stain on North Carolina's criminal justice system that cannot be allowed to stand any longer." Four of the Wilmington Ten died before they were pardoned.

The Wilmington Ten, The National Registry of Exonerations 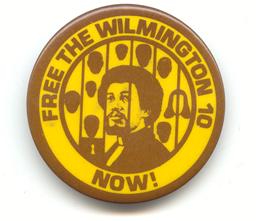 This button, created circa 1975, depicts one of the Wilmington Ten, Rev. Dr. Benjamin Chavis, behind bars accompanied by silhouettes of the nine others that were arrested and wrongfully convicted for the February 6, 1971 firebombing of a white-owned grocery store in Wilmington.