"The Normal" was one of the notable achievements of the reform movement in education which began in North Carolina in the 1880s. By almost any standard, education in North Carolina was in miserable condition at the beginning of the final decade of the nineteenth century. Nearly one third of its citizens were illiterate; school attendance rates were well behind that of the nation as a whole; and, at one point during this period, North Carolina had the lowest per pupil expenditure rate in the nation. A group of young teachers, several of them trained at the University of North Carolina, accepted the challenge of revamping the state’s educational system. To do this they advocated the adoption of the graded school concept throughout the state. Graded schools — in which students pass from lower to higher levels or grades every year — demanded a substantial increase in professionally trained teachers, so the educational reformers also sought the establishment of training schools for a new generation of teachers. Beginning in 1889 Charles Duncan McIver and Edwin Alderman, two of the young leaders of the educational reform movement, crisscrossed the state holding “Teachers’ Institutes” in every county. They hammered home the advantages of the graded school system and always put in a plea for a teachers’ training school. When the legislature finally acted in 1891, McIver was the obvious choice to head the school, while Alderman was one of the first faculty members. After considering several locations, a site on the edge of Greensboro, North Carolina, was chosen for the new school, and in 1892 the Normal and Industrial School welcomed the first students to its new, two-building campus.

Over the years under several names, the University of North Carolina at Greensboro supplied teachers to the public school systems of the state. McIver and Alderman, however, had also believed in the value of higher education for women as a good in itself, and from the beginning the school served this cause as well. The curriculum in the arts and sciences broadened and deepened as the Normal became first a college and then a university. As Chancellor William Moran observed in 1992, the founders and faculty at Greensboro understood “that talented women were one of the new forces that would shape the nation and the twentieth century.” 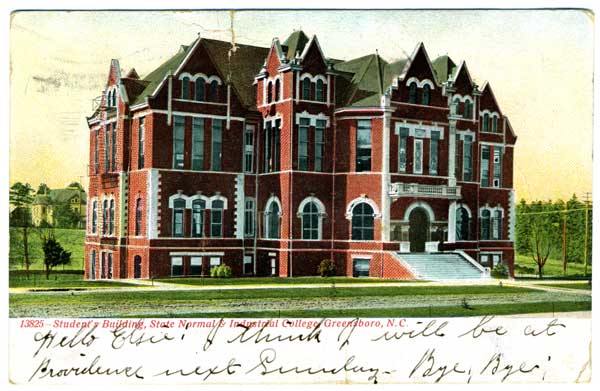 A postcard from UNC's North Carolina Collection shows the Student's Building at the State Normal and Industrial College (now UNC-Greensboro) in 1907.