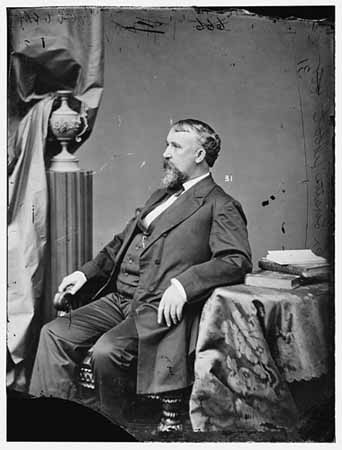 Joseph Carter Abbott, Union general, United States senator, political lobbyist, newspaper editor, and manufacturer, was born a son of Aaron Abbott in Concord, N.H. He had two brothers and six sisters. Upon graduation from Phillips Academy, Andover, Mass., in 1846, Abbott returned to Concord, undertook the study of law, and was admitted to the New Hampshire bar in 1852. While maintaining a law practice at Concord, he served as editor of the Manchester (N.H.) Daily American (1851–57) and as editor and owner of the Boston Atlas and Bee (1859–61).

Meanwhile, Abbott had become active in the Whig party. Though the party soon disappeared, the Whig ideal of nationalism and concern for economic growth remained with Abbott all his life. With the disintegration of the Whig organization, Abbott joined the short-lived Know Nothing party, which was transformed into the "Fremont clubs" in 1856 and absorbed into the Republican party shortly thereafter. His political activities won for him political appointments: he was adjutant general of the New Hampshire militia (1855–61) and served on the commission that surveyed the boundary between New Hampshire and Canada.

With the outbreak of the Civil War, Abbott dropped all other activities to organize the Seventh Regiment of New Hampshire Volunteers, an achievement that entitled him to serve as its commanding officer with the rank of colonel. He yielded the position, however, to H. S. Putnam, who had more military experience, and served instead as lieutenant colonel and second in command, in Florida and South Carolina. In 1863 Putnam was killed during an attack on Battery Wagner, near Charleston, and Abbott assumed command and the rank of colonel. On 15 Jan. 1865 he was promoted to brigadier general for "gallant and meritorious service" during the federal storming of Fort Fisher.

Abbott also took part in the capture of Wilmington and for more than three months was the commander of the Port of Wilmington. The assignment was a difficult one. Because of the influx of refugees and freed prisoners of war, the population of the city increased two and a half times within a few days of the federal occupation. Food and sanitary facilities were inadequate, and disease broke out. Abbott's wife came to Wilmington to join him and do relief work in the refugee camps but caught typhoid fever and died.

Yet it was in the chaos and misery of postwar Wilmington that Abbott came to the decision that the city would be his permanent home. Perhaps he was influenced by the public recognition given to him and his wife for their work in cleaning up the signs of war. He certainly made many friends at this time. He may also have become aware of exceptional business opportunities then existing in southeastern North Carolina.

For whatever reasons, in September 1865, after being mustered out of the army and settling his business affairs in New England, Abbott returned at the age of forty to Wilmington, which would remain his home for the rest of his life. The financial resources of the former lawyer and newspaperman went a long way in a region where the money supply had largely vanished with the Confederacy. With business partners, several of whom were also newcomers, he formed the Cape Fear Building Company and bought three thousand acres of pine forest in Bladen County on the Wilmington, Charlotte and Rutherfordton Railroad, fifty miles west of Wilmington. From the throngs of unemployed refugees the partners recruited a work force that eventually numbered 150 and built a sawmill and woodworking plant that produced railroad cars, laths, fence pickets, broom handles, and the parts for prefabricated houses. Some of these products were marketed as far away as Cuba. Abbott and his associates also laid out the town of Abbottsburg.

Even Abbott's enemies would often cheerfully concede that Abbottsburg was perhaps the most promising economic development in southeastern North Carolina. The New Englander's politics were quite a different matter. Elected to the North Carolina Constitutional Convention of 1868, Abbott emerged as one of the most influential delegates present, partly because the convention had been elected in such a way as to exclude most of the established political leadership of antebellum North Carolina. Few of the delegates had any political experience at all. Rare indeed was the delegate who could match the political resources that Abbott brought, with his legal training, newspaper background, and experience of political, military, and business leadership.

But Abbott's influence was not entirely a matter of political know-how. He also had at least $20,000, contributed by railroad owner George Swepson, which he used to win passage of measures providing for state aid to railroads. Subsequent investigations have shown that much of this money was used for bribes, for which Abbott was roundly condemned by both contemporary newspapers and later historians. Rarely have his critics overlooked his New England origin; and, generally speaking, the corrupting influence of Abbott and other carpetbaggers has attracted more attention than has that of the native-born members of the same lobby

It is significant, however, that from his own constituency in southeastern North Carolina there has been virtually no condemnation of Abbott for his activities on behalf of the railroads, from either his fellow Republicans or his Democratic opponents. The future prosperity of the area depended so heavily upon completion of the WC&R that both parties took a permissive view of the tactics Abbott used to win appropriations for it. Most people in the section to some degree benefited from his impropriety, though few more than Abbott himself, with his three thousand acres of land along the favored line.

Following the convention Abbott was elected to the legislature which chose him for the United States Senate. He immediately became the chief spokesman for another special interest group, this time the Wilmington port lobby, which, like the WC&R Railroad, was so closely linked to the prosperity and economic development of the region that it enjoyed the local support of both parties. The arguments Abbott presented to the Senate for federally financed harbor improvements were based on carefully researched studies made by engineers and local leaders of the Wilmington area, who were often Democrats. As a result of local bipartisan cooperation to bring about the completion of the WC&R and the improvement of the harbor, both of which owed much to Abbott's efforts, honest and otherwise, Wilmington emerged at the end of the century as an important port for cotton exports.

Abbott's later years were clearly unhappy ones. His Cape Fear Building Company was ruined by two converging developments: first he and some competing lumbermen exhausted the forest resources in easy reach of Abbottsburg; and then, before he could relocate his plant, the panic of 1873 struck and caused a $100,000 contraction in his assets. He became bankrupt and Abbotsburg a ghost town.

He still had political influence and was able to obtain political jobs; he was collector of the Wilmington Customs House from 1874 until 1878. But failure dogged his heels in politics as well as in business. As a result of the disputed election of 1876, Rutherford B. Hayes won the presidency by making an arrangement with his Democratic opponents at the expense of many of his former friends in the South. Like many southern Republicans, Abbott suffered from the bargain. He was dropped from the Republican National Committee, though Hayes gave him a minor job as inspector of ports.

Abbottsburg, once the symbol of progress in southeastern North Carolina, fell into decay, slowly throttled by the relentless encroachment of a second-growth scrub forest. Its founder, hounded by creditors and abandoned by many of his friends on the Potomac as well as on the Cape Fear, spent his last years brooding in his home in Wilmington. His one outside interest appears to have been the activities of the Presbyterian church. He died at the age of fifty-six and was buried in Valley Cemetery, Manchester, N.H. He was survived by his third wife, the former Ellen C. Tasker of Providence, R.I. He had no children.

Report of the Commission to Investigate Fraud and Corruption Under Act of Assembly Session 1870–1872 (Shipp Report, 1872).

Waite, Otis F. R. New Hampshire in the great rebellion: containing histories of the several New Hampshire regiments, and a biographical notices of many of the prominent actors in the Civil War of 1861-65. Claremont, N.H.: Tracy, Chase & Co. 1870. 348-352. https://archive.org/stream/newhampgrtreb00waitrich#page/348/mode/2up (accessed June 3, 2013).