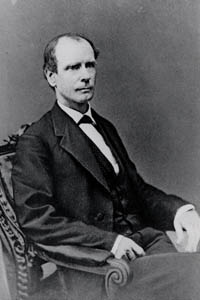 Amos Tappan Akerman, lawyer, and U.S. attorney general, was born in Portsmouth, N.H., the son of Benjamin and Olive Meloon Akerman. He was educated at Phillips Exeter Academy and Dartmouth College, being graduated from the latter in 1842. His first employment was as headmaster of a boys' academy in Murfreesboro, where his students included Pulaski Cowper, later private secretary to Governor Thomas Bragg and General Lawrence S. Baker of Gates County. Years afterward, Cowper and Baker remembered schoolmaster Akerman as one who, "with a too painful frequency, exemplified the proverb of not 'sparing the rod,' and not 'spoiling the child.'"

Following a term in Murfreesboro, Akerman in 1846 found employment as a private tutor with John McPherson Berrien of Savannah, Ga. Akerman studied law under Berrien, was licensed to practice, and settled at Clarksville, Ga. Initially an opponent of secession, he accepted the fact of disunion and served first with Toombs's brigade and later with the quartermaster department. After the war he served in Georgia's state constitutional convention of 1868 and was appointed attorney general by President Grant in 1870. An opponent of the vast claims to land sought by major railroad interests, Akerman was attacked by Huntington, Gould, and other magnates, who were successful in persuading Grant to remove him from office at the end of 1871. He resumed his law practice in Georgia and continued with it until his death a decade later, at Cartersville.