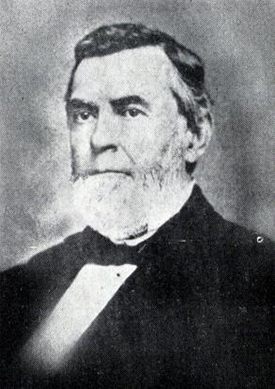 Thomas Bragg, lawyer, governor, U.S. senator, and Confederate cabinet member, was one of six sons of Thomas and Margaret Crossland Bragg of Warrenton. Two brothers, Braxton and John, had distinguished careers. For a brief family history, see the biography of Braxton Bragg.

Bragg attended Warrenton Academy for nine years and was for three years thereafter a student at Captain Alden Patridge's Military Academy at Middletown, Conn. As had his elder brother, John, he followed his formal education by studying law under the tutelage of Judge John Hall of the North Carolina Supreme Court; he was admitted to the North Carolina bar in 1832. He established a successful law practice in Jackson, Northampton County, and entered politics as a Democrat. Success did not come as quickly in politics as it did in law, however, partly because Northampton was a stronghold of Whiggery. Bragg persevered and was elected in 1842 to a single term in the North Carolina House of Representatives, where he served as chairman of the judiciary committee. He became one of his party's leaders, serving as a delegate to the Democratic conventions of 1844, 1848, and 1852, and in 1854 he won an uphill battle for the North Carolina governorship. He served two terms as governor, championing a wider franchise, internal improvements, and an improved banking system. As a states' rights Democrat, he expressed opposition to federal encroachment but counseled moderation in resistance to it.

In 1859 he was elected to the U.S. Senate, where he served until his withdrawal 6 Mar. 1861, before North Carolina's secession from the Union. He made few public comments on secession but revealed privately and in his diary that he considered it an impractical, unwise proceeding, no matter how justified.

Following his withdrawal from the Senate, he returned to his native state. There he was engaged in helping to prepare North Carolina's military forces for the looming conflict when he was asked by Confederate President Jefferson Davis to succeed Juda P. Benjamin as attorney general of the Confederacy, after Benjamin had been switched to another post. Bragg accepted, serving ably from 22 Nov. 1861 until 18 Mar. 1862, when he fell victim to internal political bickering. He resigned in order to allow Davis to appoint Thomas H. Watts of Alabama to the position, in response to a demand by former Union Whigs for a post in the Davis cabinet. As attorney general, Bragg drafted a plan for the organization of his department and was active in attempts to solve such problems as disloyalty to the Confederacy, the activities of Unionists within the South, the relations of the central government with the various Confederate states, treaties to be negotiated with the Indians, and the naturalization of aliens by the Confederacy.

Following his resignation from the cabinet, he moved to Petersburg, Va., the ancestral home of his wife, Isabelle Cuthbert Bragg, whom he had married in October of 1837. He lived there until 7 Nov. 1862, when he returned to North Carolina, working in Raleigh as both a personal representative of Davis and the chairman of a citizens' effort to keep the state committed to the Confederate cause. Despite his private belief that disaster was ultimately in store, he was effective in keeping North Carolina behind the Davis government.

After the conflict was over, he resumed the practice of law and again became involved in state politics, fighting for the realization of his ideals of good government. One of the last acts of his career, shortly before his death, was to serve as counsel for the impeachment of former friend and political ally Governor William W. Holden; he helped to secure convictions resulting in Holden's removal from office.