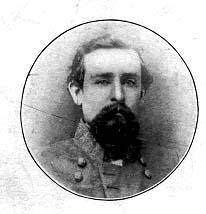 Laurence Simmons Baker, Confederate soldier, farmer, insurance agent, and railroad agent, was born at Coles Hill, Gates County. (Through a clerical error in the War Department records, his name frequently appears as "Lawrence.") Baker's family was of English descent; the American branch was founded by Henry Baker, who came to Virginia from England in the seventeenth century. From him descended Major Laurence Baker, a leader in the Revolution. Major Baker's son was Dr. John Burgess Baker, physician and legislator from Gates County and father of Laurence Simmons Baker. Laurence S. Baker's mother was Mary Wynn Baker. Young Baker was educated in North Carolina and at Norfolk Academy. He entered West Point and was graduated in the class of 1851. Commissioned a second lieutenant in the Third U.S. Cavalry (Mounted Rifles), he attained the rank of captain and served on the frontier.

Although opposed to secession, Baker threw his lot with North Carolina when it seceded from the Union in 1861, resigning his commission on 10 May. He was promoted to lieutenant colonel of the Confederate cavalry, dating from 16 Mar. 1861, and on 8 May he was appointed lieutenant colonel of the First North Carolina Cavalry (Ninth North Carolina Regiment), of which Robert Ransom was colonel and James B. Gordon major. This regiment was to prove one of the finest cavalry regiments in Confederate service and was to distinguish itself on many fields of battle. Upon the completion of its organization, the regiment was sent to Virginia and there, on 26 Nov. 1861, participated in its first military engagement at Vienna. In the spring of 1862, Colonel Ransom transferred from command of the regiment to the infantry, and Baker succeeded to his place, becoming colonel on 1 Mar. 1862. Later that month, Baker and the regiment were sent back to North Carolina to help stem the advance of Burnside's Union forces. In June, however, Baker's command was ordered to return to Virginia to help Lee's army repel McClellan's forces in front of Richmond. Serving in the cavalry brigade of General Jeb Stuart, Baker's regiment patrolled the right flank of Lee's army east of Richmond during the great Seven Days battles. On 29 June 1862, during this campaign, the First North Carolina Cavalry was ordered to make a reconnaissance of the position of the retreating Union army on Willis Church Road, southeast of Richmond. Baker led his regiment into action, driving back Union cavalry until Union infantry support forced him to retire. In the reorganization of Stuart's cavalry following the Seven Days battles, Baker's regiment was placed in General Wade Hampton's cavalry brigade; it served under Hampton in the battles of Second Manassas, South Mountain, Sharpsburg, Williamsport, Fredericksburg, and Chancellorsville. In the bloody battle of Brandy Station, 9 June 1863, the First North Carolina Cavalry did admirable service in helping to throw back the advance of Union cavalry. At Upperville, Union cavalry again attacked, and Hampton turned to Baker for help. "First N.C., follow me," yelled Baker, and the Union cavalry were handsomely repulsed. 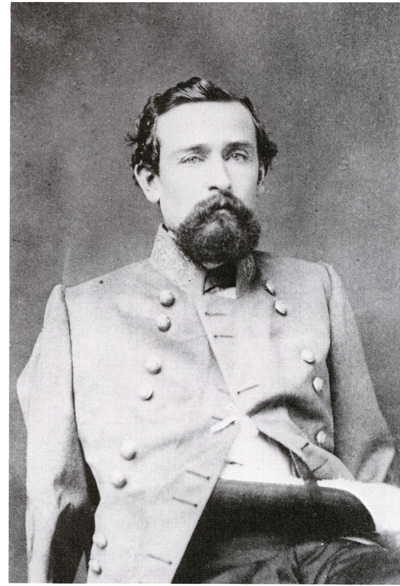 n the Gettysburg campaign, the regiment accompanied Stuart on his controversial raid around the Union army. In the cavalry action on 3 July 1863, in the rear of the Union army, General Hampton was wounded, and Baker succeeded to the command of the brigade. In this capacity he handled well the difficult job of covering the retreat of the army back to Virginia, fighting at Hagerstown and Falling Waters. Once back in Virginia, Baker continued in command of the brigade, picketing the Potomac from Falling Waters to Hedgeville. During this time, there were frequent skirmishes with Union cavalry, until at last Baker's brigade was drawn back to the line of the Rappahannock River. Here, on 31 July 1863, Union cavalry again advanced on Brandy Station, and Baker's men resisted. General Stuart, Baker's superior, reported to General Lee: "Hampton's brigade behaved with its usual gallantry and was skillfully handled by Colonel Baker. . . ."Lee recommended Baker for promotion that same day; he was made brigadier general, dating from 23 July (confirmed 16 Feb. 1864), and assigned to command an exclusive brigade of North Carolina cavalry containing the First, Second, Third and Fifth North Carolina cavalry regiments. Baker had been badly wounded in the right arm during the action at Brandy Station, however, to the extent that the arm was shattered and unusable. Unfit for active field service, he yielded command of his new brigade to James B. Gordon.

In May 1864, when General Hampton became the chief of cavalry in Lee's army after Stuart's death, Hampton requested Baker for division command with the rank of major general. Baker's wound prevented acceptance of this offer, and on 9 June 1864 he was assigned instead to command the Second North Carolina Military District, with headquarters at Goldsboro. In this quieter departmental command, Baker had charge of Confederate troops at Goldsboro, Kinston, Wilmington, Plymouth, and Weldon. In particular, he had to protect the Weldon Railroad, a major lifeline to Richmond and Petersburg, from the forays of Union forces. Baker was wounded again in a skirmish on 22 Sept., but he returned to duty in time to help confront Sherman's Union army near Savannah and Augusta, Ga. Recalled back to service in North Carolina by General Braxton Bragg, Baker was put in charge of the First Brigade of North Carolina Junior Reserves, a brigade consisting of boys younger than eighteen, in Hoke's division. In March 1865, Baker led this brigade in the Battle of Bentonville, a last desperate effort to stop Sherman's advance into North Carolina. In April, Baker's command was detached from Johnston's main army to hold open the Weldon Railroad. Upon learning of the surrender of Lee's army, Baker sought to rejoin Johnston with his command but was unable to do so. Johnston surrendered on 26 Apr. 1865, and Baker gave up the struggle.

He was paroled at Raleigh on 8 May 1865 and began a struggle probably more difficult for him than the war had been. Having had all his previous training and experience in the military, he had somehow to fit into civilian life. He lived at New Bern for some time, engaging in farming. Then he moved to Norfolk, Va., carrying on a trucking business, only to return to North Carolina to engage in insurance until 1877. He was then offered a position as agent of the Seaboard Air Line Railroad at Suffolk, Va. He accepted it and served there until his death.

Baker was also a member of the Tom Smith Camp, United Confederate Veterans, at Suffolk. He worked diligently to keep alive comradeship among his soldiers and survivors of the war.

One of the last surviving Confederate generals, Baker was buried at Cedar Hill Cemetery, Suffolk, Va.

The 4th North Carolina Cavalry in the Civil War: A History and Roster,  by Neil Hunter Raiford in GoogleBooks.

The Virginia Magazine of History and Biography, Volumes 1-16, edited by William Glover Stanard in GoogleBooks.

There is a family story that

There is a family story that holds Gen. Baker always carried a loaded pistol to Stuart's HQ to insure that gentleman kept a civil tongue in his head.

I read the above on Laurence

I read the above on Laurence Simmons Baker. My grandmother Lettie Mae Wynns (Johnson) spoke many times about having a family connection to a Colonel Baker. How can I find out if there is any family connection? She was from Edenton North Carolina born February 12, 1907.

Thank you for using NCpedia and taking the time to leave your question.

I’m forwarding your question to Reference Services at the NC Government and History Library. A librarian will contact you soon to assist with your research.